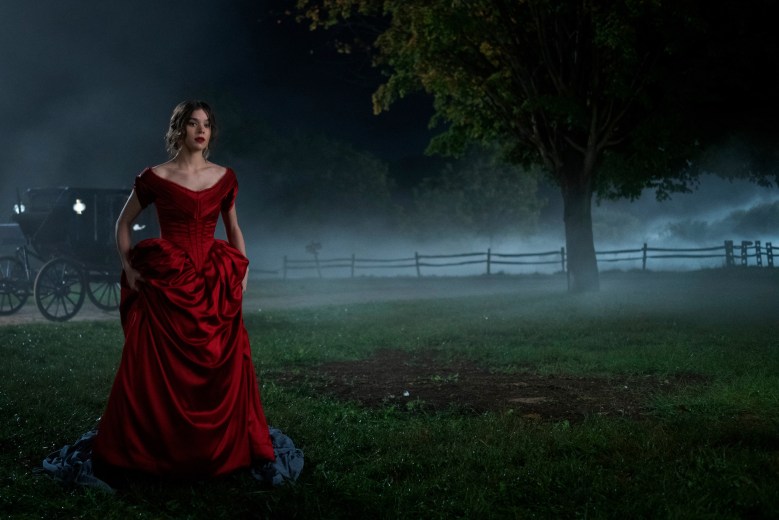 To best enjoy the new Apple TV+ series “Dickinson,” you need to disabuse yourself of the notion that it has anything to do with posthumous poetry goddess and all-around depressive Emily Dickinson. That’s the only way you’ll be able to wrap your head around the anachronistic half-hour comedy from Alena Smith, dedicated to rebranding the poet as a rebellious #teen who never met a rule she couldn’t break.

Unfortunately, the pilot episode of the half-hour comedy, “Because I could not stop,” works hard to prevent that disassociation in its audience. There are heavy-handed Dickinson references, where Emily (Hailee Steinfeld) literally meets with Death (Wiz Khalifa, because sure), and stanzas of her poems are scrawled across the screen as she writes. These touches emphasize the eponymous historical figure, but work at cross-purposes with making the show, well, good.

As it progresses, “Dickinson” becomes more self-assured and less dependent on the legacy of its heroine. By Episode 3, titled “Wild nights,” the series has settled comfortably into what it was always meant to be — a coming-of-age comedy — and slowly becomes a quiet revelation.

Gone is our modern conception of an artist who remained a mystery, even to her closest confidantes. Left in her place is someone far more recognizable, a young woman who hates doing chores, hates the patriarchy, hates the limitations placed on her existence, and is in love with her best friend, who happens to be dating her brother.

This shift will make it easy for some to dismiss “Dickinson” as just another teen soap opera. Sofia Coppola’s incendiary 2006 film “Marie Antoinette,” another anachronistic meditation on a woman profoundly misunderstood by history, faced similar criticisms in its time. “Dickinson” is nothing if not a sister from another mister for “Marie Antoinette,” with its subtle observations about class and societal expectations potentially overshadowed by exquisite production values and modern music.

And it’s clear from the three episodes provided by Apple that the streamer has spared no expense recreating the world of 19th century Amherst, leaving every penny on the screen in the form of lush fabrics and impeccable set design. Working in concert with idiosyncratic direction from indie film darlings David Gordon Green (Episodes 1 and 2) and Lynn Shelton (Episode 3), Massachusetts of old jumps off the screen, bringing vibrancy and color to a past too easily remembered as sepia-tinged and demure. To that end, Steinfeld is the furthest thing from demure and while her depiction of Emily’s obsession with death is fine, it is in the poet’s passion for life that the actress shines. In particular, Steinfeld and co-star Ella Hunt render Emily’s relationship with best friend/soul mate/would-be girlfriend/brother’s fiancée Sue Gilbert as something so much more than just a Facebook “it’s complicated” status.  The women are soft and strong and comforted in the love of the other (all wide eyes and flushed faces), but wise to the realities of the world and the heartbreak that stalks them more diligently than even death.

In a way, the fledgling queer romance plays a large part in the overall appeal for “Dickinson.” The casual depiction of Emily and Sue’s relationship and priority placed on female sexual appetite provides a safe haven for teens looking for more representational and mature fare.

Regardless of what anyone thinks about the series, it clearly aims to serve a profoundly underserved audience. Half-hour comedies for young adults are a rarity outside the safe spaces of The Disney Channel and Nickelodeon from which “Dickinson” offers some welcome relief. It also provides fewer penises than controversial HBO teen drama “Euphoria” and exponentially fewer murders The CW’s soapy teen series “Riverdale,” both of which are hour-long.

While the show can vacillate wildly between between slight and supercilious, it contains plenty of small moments that tip its hand toward the series it hopes to become. When Emily states “Sometimes I feel like a slave,” during a dinnertime conversation about abolition, her outlandishness is immediately dressed down, with her mother rightly pointing out that she’s just a spoiled little girl. During a heated spat with Sue, the poet takes offense at her friend calling Emily’s life perfect, only to have to exasperatedly retort that she was all alone in the world and could easily starve to death. The scenes puncture Emily’s pretension and ground her journey, as she struggles to acknowledge her own privilege, even as she’s denied so much autonomy. The supporting cast is comprised largely of fresh faces, with longtime character actor Toby Huss serving as Emily’s image-conscious father Edward Dickinson. The other familiar face among the cast comes in the form of “30 Rock” charmer Jane Krakowski, who through the first three episodes is so profoundly miscast as Emily’s anxious mother that you ultimately feel nothing but pity for the actress, who is trying, in vain, to make it work.

Perhaps Krakowski improves throughout the first season, the whole of which will drop November 1 with the overall launch of Apple TV+. Maybe the show falls apart in Episode 5 or they radically rewrite history and Death comes early for Emily and the rest of the show is just chilling with Wiz Khalifa in his morbid carriage, or Sue and Emily run away together and have 50 babies. There’s no way of telling because of how Apple has chosen to roll out their material.

Apple’s choice to only provide critics with three episodes, or roughly 90 minutes of the only live-action series they’re releasing in full, feels like a perilous mistake, particularly with a show that only really begins to figure out what it’s doing in Episode 3. Why not give critics more time to fall in love with a show that you’ve already picked up for a second season? Denying media an opportunity to celebrate your content, particularly when you’ve never before had content to speak of, is a miscalculation.

Despite that, within “Dickinson” is the still-nascent potential for something beautiful, waiting to burst forth like a morning glory, so long as its promise is cultivated with care. For some, the seemingly trivial affairs of young women will always seem little more than filler. But for others, those who “Dickinson” understands whole-heartedly, they know it’s a matter of life and Death.