Whether they were about unruly pets or a love-story spanning continents, the New York Times Op-Docs told stories of friendship and empowerment. 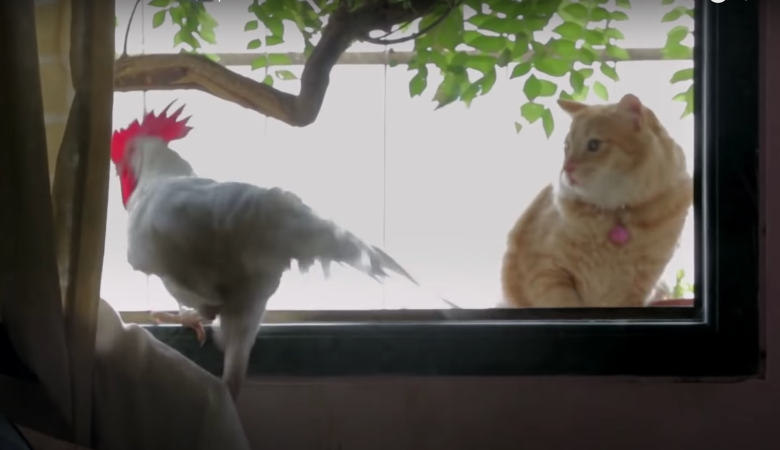 “Meet Tungrus and His Pet Chicken From Hell”

Tornado chasers, fencing, and the so-called “pet chicken from hell” were among the topics that entertained an audience during a recent screening of five New York Times Op-Docs in Los Angeles.

The New York Times Op-Docs had diverse themes, but all of them told stories that touched on either topical issues or human-interest stories. Take “The Last Storm,” the first documentary that was screened as part of the free International Documentary Association viewing event. “The Last Storm” centered on Mark Zabawa, a man recently diagnosed with lung cancer, who sets out to fulfill his longtime goal of chasing a tornado.

Although the tornado, which Zabawa and his new friend eventually find near the end of the documentary, presents plenty of physical danger — the wind becomes so fierce it’s hard to hear the subjects, while giant chunks of hail end up taking part of their car’s windows out — “The Last Storm” is less about the action and more about Zabawa empowering himself during an especially difficult period in his life.

Though the other four documentaries screened during the event didn’t boast quite as many raging forces of nature, all of them offered insightful and in-depth glances into their subjects’ lives. For “Walk Run Cha-Cha” filmmaker Laura Nix spent six years following Paul and Millie Cao, two California professionals who spend much of their free time dancing.

The Caos were born and met one another in Vietnam, but got separated in the aftermath of the Vietnam War. The two eventually rekindled their relationship in Southern California and developed a close bond through dancing. During a Q&A following the Op-Docs screenings, Nix noted that she just happened upon the dance studio during an unrelated project and eventually became immersed in the Caos’ story.

“I was doing research on another project and stumbled across the dance studio,” Nix said during the Q&A. “There were 40 people dancing in the middle of the day, and I was like, ‘What is this place, I have to understand this!’ I started taking dance classes there for a year so I could answer that question.”

The tones of each Op-Doc were as diverse as their themes: While “Walk Run Cha-Cha” told a heartwarming story about love, there was also “Tungrus,” which centered on the aforementioned “pet chicken from hell.” “Tungrus” followed an Indian family that adopted a pet chicken, which ends up causing all sorts of chaos throughout the household.

The chicken’s playful disruptions of the family’s day-to-day life elected plenty of laughs from the audience; less so when the chicken repeatedly relieved itself on the floor. Of course, the chicken was bought to be eventually slaughtered and eaten, and the documentary indeed takes a somewhat morbid turn near its end, when the chicken’s fate is made clear. It is livestock, after all.

Other screened documentaries included “My American Surrogate,” which focused on a Chinese surrogacy agent’s business in California, and “Stay Close,” which followed professional fencer Keeth Smart’s journey to the 2008 Olympic Games in Beijing.

The New York Times Op-Docs are part of a documentary project launched by the publication’s opinion section in 2011.

This Article is related to: Film and tagged Documentaries, International Documentary Association