Digital image stabilization mixed with the show's penchant for shaky camera work make it seem as if certain scenes were filmed out at sea. 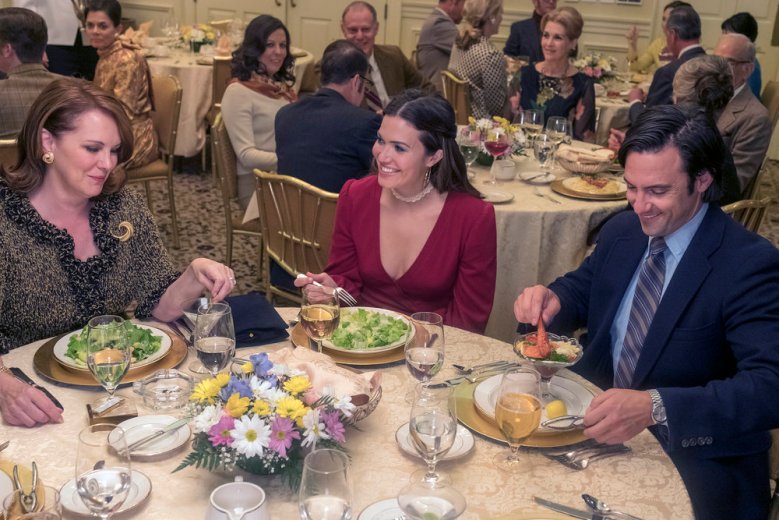 “This Is Us” has always been a moving show, typically about the Pearson family’s trials and tribulations, but a recent technological intrusion has cropped up in the show’s fourth season that pretty much makes watching without the company of a sickness bag a risky endeavor on the part of the viewer.

When the show debuted, its use of shaky cam was in keeping with its fly-on-the-wall, this-is-real-life aesthetic, not so much for the free camera reasons of Dogme 95, as much as the implied cinema verité of “Friday Night Lights.” But now, with digital image stabilization, the way it’s currently being used on “This Is Us” makes it seem as if its producers were so preoccupied with whether or not they could use the technology, they didn’t stop to think if they should.

Take this as an example: During the season premiere, “Strangers,” there’s a scene that starts simply enough with Rebecca’s parents grilling Jack on both topics they were told were off-limits, Vietnam and his family. After a brief reprieve to clean a little cocktail sauce off his jacket, we return to the table as Jack is about to reveal his true nature to her folks, telling them about how his parents always fought and he essentially had to raise his brother on his own.

As his monologue turns from cute anecdote about his brother into a metaphor for Vietnam (around the 1:05 point in the clip above) the camera, which has already been pushing in, begins doing two things simultaneously: continuing its hand-held movement while somehow keeping its subject locked perfectly in the center of the frame.

At first, it’s nearly indistinguishable, but the closer we get to Jack, the more the space around him begins moving in an unnatural manner, as if this scene were taking place below deck on a ship out to sea. This is likely the result of image stabilization applied to the image. Remember, this is likely one long dolly shot. 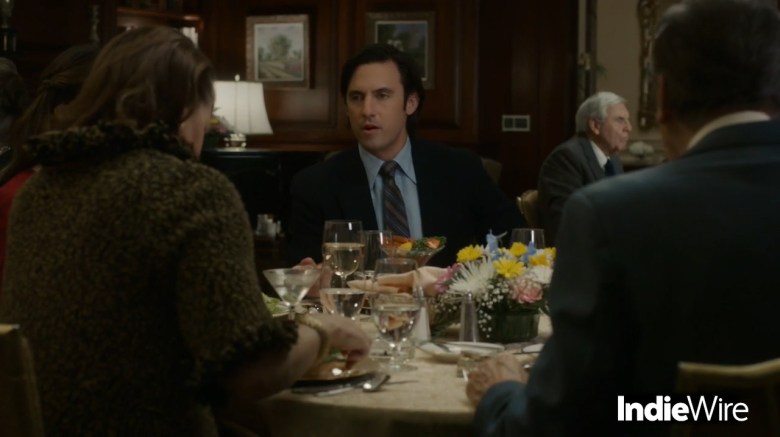 And the final frame: 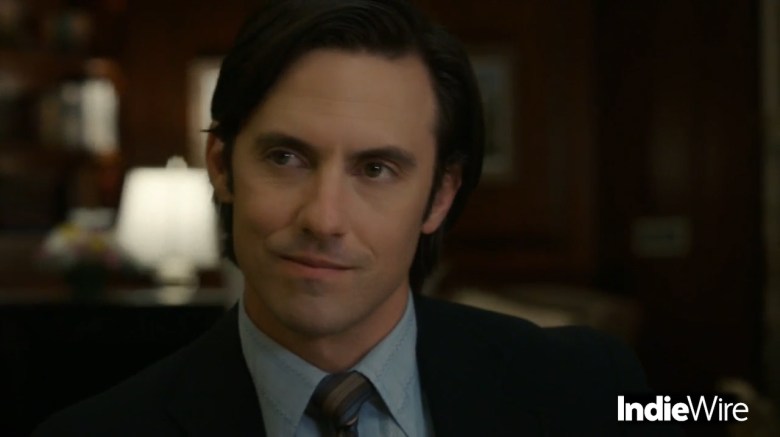 In order to achieve this final framing, without, say, building a table that could be removed a la those in this famous dolly shot from “Wings”, the cinematographer or camera operator likely needed a fairly long lens to shoot across the space. A longer focal length is forgiving when you’re capturing the mis en scene, less so when you’re in a close up. Hence, the need for image stabilization.

The degree of difficulty on maintaining proper framing throughout this camera move is incredibly high — in fact there might be a chance that this shot is locked down and the handheld aesthetic is actually added after the fact, in post, which would similarly account for the strange and unnerving floating motion of the background over Jack’s shoulders. IndieWire has reached out to NBC for clarification on the shooting process of these scenes.

There’s a similar moment in the cold open from this season’s third episode, “Unhinged,” which sees Jack’s brother, Nicky, who’s been making strides at bettering himself, receiving the bad news that his therapist with whom he’s built a bond is being transferred to a new hospital. Now, granted, the effect works slightly better here, almost as if it’s intentionally showing how Nicky’s world is becoming untethered from the laws of physics everyone else abides by.

Image stabilization has come a long way, included in prosumer products like Adobe Premiere, where Warp Stabilization is built into the NLE, but like any tool that should be used in moderation,  if one asks it to do too much — the seams start to show.

(Note: Episodes were screened on a television with motion smoothing turned off).

This Article is related to: Television and tagged NBC, This Is Us, TV analysis