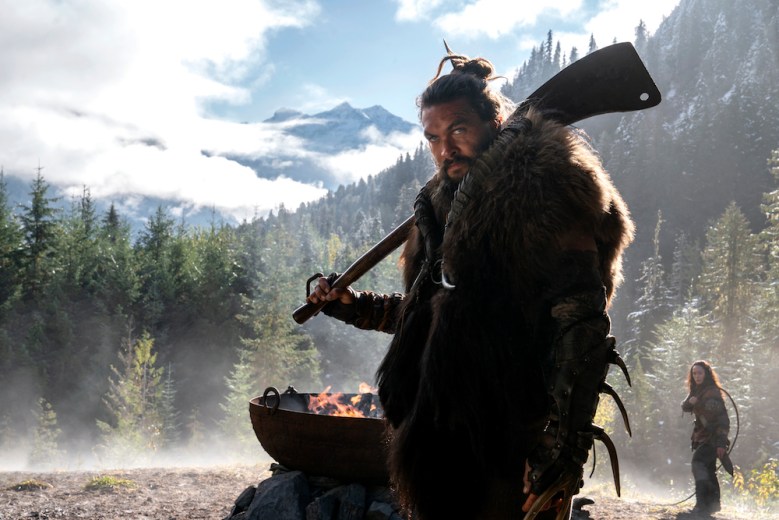 There’s a scene near the end of “See’s” hourlong, action-driven pilot where Queen Kane (Sylvia Hoeks), the malicious ruler of one of Earth’s last civilizations with electricity, interrupts her advisers by bluntly shouting, “I wish to pray!” Retreating to an oversized footrest bathed in light, the blind leader of a blind world licks her fingers, starts speaking to God, and then masturbates until her prayer and orgasm climax together.

There’s no particular explanation for this — not in the first three episodes, anyway — and the scene highlights both the peculiar experience of watching “See” as well as the show’s early shortcomings. For as odd as creator and writer Steven Knight’s choices can be, they rarely evoke an intuitive consequence from his apocalyptic premise or a clever way to maximize the bold new world he’s trying to build.

Set centuries after a deadly virus reduced the planet’s population to less than 2 million people — and left the few survivors without vision — “See” shows its characters reduced to early settlers’ way of life. Anyone who doesn’t live in or near the queen’s water-powered dam (known as Payan Kingdom) reside in small villages, spending their days hunting live animals and their nights sleeping in tipis. Some homesteaders are mystics, others have special abilities that allow them to sense people’s intentions, but most fall into the hunter or gatherer ways of life.

Chief among the hunters — and Chief of the Alkenny Tribe — is Baba Voss (Jason Momoa), an unmatched, but reluctant warrior who befriends, courts, and marries a newcomer to town, all before the series begins. You see, Baba always wanted kids, but he couldn’t have them, and Maghra (Hera Hilmar) walked into the village already pregnant — coupling up was their destiny… even if it sounds like a relationship based on convenience.

Even more convenient: When the pilot episode starts, a ruthless army has breached the edge of the village, hunting Maghra. These Witchfinders believe, you guessed it, she’s a witch, and, worse still, she’s carrying children sired by a man who can see. Paris (Alfre Woodard), the town’s midwife and spiritual leader, gleans as much while Maghra’s in labor and Baba is at the front of the line, defending his village. 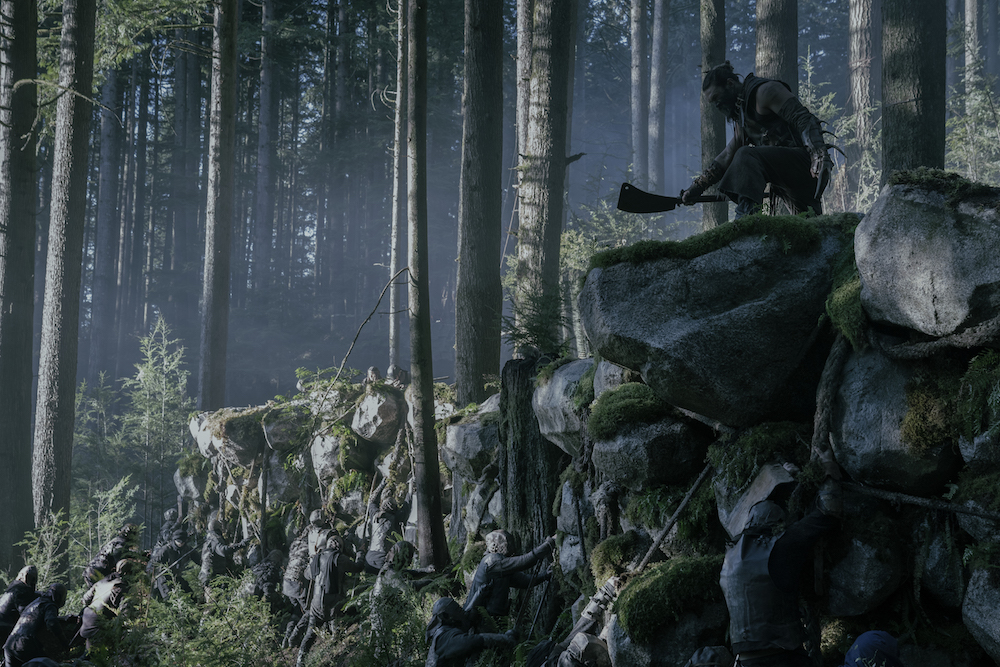 An episode-long battle ensues, and here’s where “See” starts to click — literally. As the Alkenny army approaches their enemy, they communicate with tongue taps and careful clicks, even commencing an attack by lightly clinking their weapon on a rock. Before that, Baba gives an inspirational speech that’s half mumbled English and half new-world gibberish, and Momoa’s vehemency nearly sells it. Directed with a clear eye for the natural beauty surrounding the battle (and a rudimentary vision of everything else), Francis Lawrence helps create a compelling, lengthy, and somewhat different melee. Later scenes feature more well-choreographed carnage, and the expansive sets and found locations add a beauty to the show that helps set it apart.

And yet, some of it just feels silly. A certain suspension of disbelief is required for a post-apocalyptic fantasy titled “See” about an unseeing society — that much is obvious — and there are plenty of cool swordfights where a combatant will pivot and thrust into a precise spot without any explanation for how they knew where to stab, or even how they knew an opponent (not an ally) was standing there. OK, fine, but what about when Baba hears the slightest clunk of a ladder smacking against his ledge, and he wisely tips the enemy’s ladder back over — but soon after, he dumbly ignores an even louder attempt at the same attack. It’s as though we’re expected to believe everyone in “See” has heightened and dulled senses simultaneously.

Also nagging: Why have these people regressed so much? What happened to indoor plumbing and solar power, let alone computers and cell phones? It’s as though the big picture concept requires disability equate to inability, and even if that’s not the intent — producers hired cast and crew members who are blind or have low vision, and also employed a blindness consultant — there needs to be more of an explanation for how, exactly, this society ended up living like it’s 200 years in the past instead of 200 years in the future. 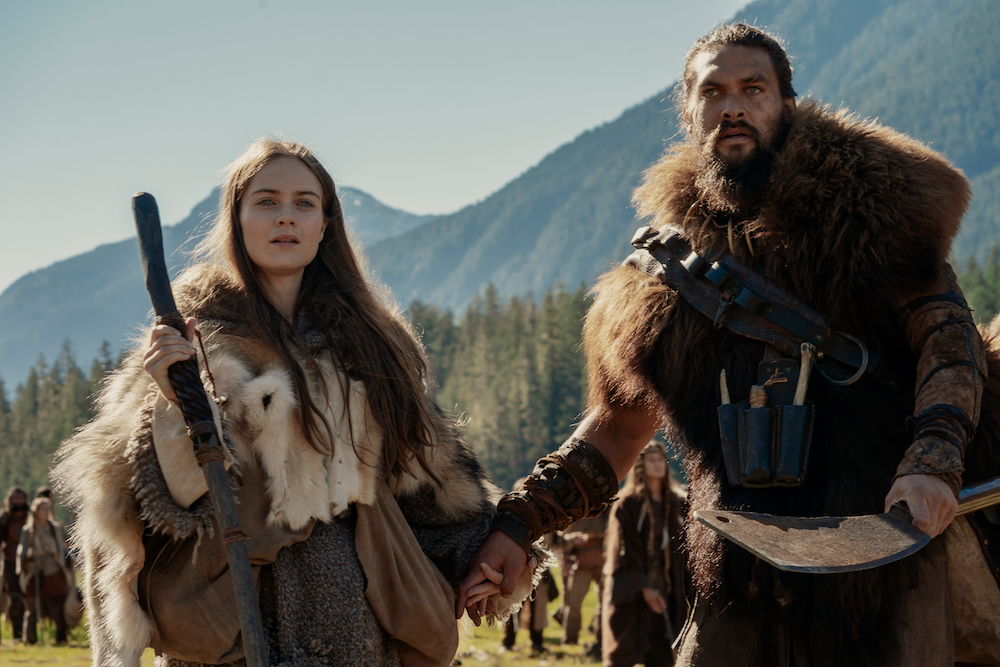 Those answers may be coming. Huge, rapid time jumps help accelerate the plot, as Baba and Maghra’s children grow 17 years in less than three hours. Their abilities provide a way for their village and viewers to learn what happened over the last few centuries, but there’s only the slightest inkling of curiosity devoted to such queries. (Gotta save time for multiple masturbation scenes.) “See” is much more invested in a simple survival story, mixing Knight’s typical self-serious writing with a bit of sci-fi fun. The balance isn’t quite there yet, as episodes don’t exactly earn their hourlong run time. (Other than the kids’ growth, nothing changes in the 12-year time jump, and really? Nothing worth talking about happens in 12 years?)

Momoa, meanwhile, fits the role well — so well, it’s like they named the character after him — but he’s still a far cry from multidimensionality; one can see how Momoa pulls from Drogo for Baba, building off the “Game of Thrones” favorite for fight scenes while imbuing the new guy with good dad instincts and a haunted past to help form a well-rounded lead. But Momoa isn’t a subtle performer, and scenes where he’s forced to wrestle with tough decisions or face his inner demons require Baba’s facial scars to speak for him.

This Article is related to: Television and tagged Apple TV Plus, Jason Momoa, See, TV Reviews