Kevin Smith's latest trip into the View Askewniverse is only for people who think "Mallrats" is a masterpiece and know "Clerks II" by heart. 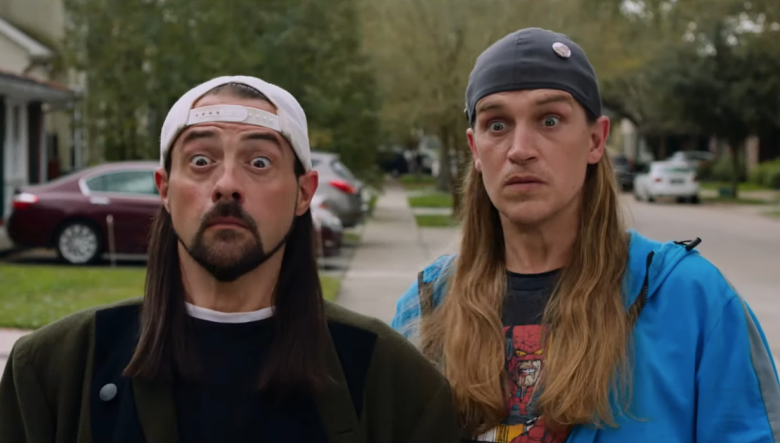 You already know if you want to see a movie called “Jay and Silent Bob Reboot,” but in the unlikely event that anyone out there is still on the fence about buying a ticket for this Charlie Kaufman-esque belly flop back into the depths of the View Askewniverse, it might help to know that Kevin Smith’s latest bit of self-mythologizing starts with a proud nod to “Clerks II.”

The scene begins with the feds surrounding a New Jersey chicken shack called “Cock Smokers,” and ends with Jay (Jason Mewes’ perma-stoned alter-ego) rehashing an old bit that involves him tucking his penis between his legs in tribute to the serial killer from “The Silence of the Lambs.” Yes, “Goodbye Horses” plays on the soundtrack. It’s a callback to a sight gag from a sequel that was already dependent on viewers’ familiarity with a different movie the first time around, and it’s hard to imagine a more appropriate opening for a stilted comedy that gets baked on its own nostalgia, confuses references with context, and internalizes “for fans only” as a business strategy instead of a flaw. Mewes’ pubes are the perfect litmus test for your potential enjoyment: Either you’re so high on this particular supply that you’d happily pay to watch Smith and his celebrity friends lazily exhume their old jokes for 95 minutes, or you’re in for a bumpy night.

Which isn’t to say the movie doesn’t have anything on its mind. A satire of sequels, remakes, and (of course) reboots that always happens to be all three of those things, “Jay and Silent Bob Reboot” is both a flippant look at how the nerd industry is eating itself alive, and a more sincere — if still very stupid — tale about making room for the next generation. There’s a reason why the last word of its title reads as both a verb and a noun. From “Clerks” and “Chasing Amy” to “Jersey Girl” and even “Yoga Hosers,” so many of Smith’s films are focused on men who need to grow up and get out of their own way. And while “Jay and Silent Bob Reboot” is as crudely shot and cartoonish as anything that Smith has ever made (including the brilliant “Clerks: The Animated Series”), it’s also his most genuine reckoning with life at the intersection between pop culture and parenthood. There’s a fine line between self-obsession and self-awareness; Smith doesn’t really know where it is, but — fresh off the heart attack that almost killed him in 2018, and rejuvenated by the perspective of a near-death experience — it’s sweet that he’s more eager to find it than ever.

The hall of mirror story begins when Jay and his “hetero lifemate” Silent Bob (Smith) are sued for copyright infringement by Saban Films — the company that funded “Jay and Silent Bob Reboot” — and lose the rights to their own names in the lead up to Kevin Smith’s big Hollywood reboot of the comic book series based on their superhero alter-egos, Bluntman and Chronic. Either you’re very confused already, or you recognize that this is the same plot of 2001’s “Jay and Silent Bob Strike Back;” it’s hard to imagine there’s much in the way of middle ground. Anyway, our heroes are placed on the no-fly list, and once again forced to find a ride from New Jersey to Los Angeles, where they plan to crash Chronic-Con and stop Kevin Smith (yes, that Kevin Smith) from shooting a pivotal scene from the forthcoming Bluntman and Chronic film.

And so the stage is set for an aimless road trip through the darkest recesses of the View Askewniverse — a 3,000-mile drive that’s almost entirely fueled by fan service. The boys run into some new characters along the way, including an entrepreneurial ride-share driver played by Fred Armisen and a court bailiff who bears a passing resemblance to Joe Manganiello, but the movie’s route mostly travels down some very familiar roads.

Curious about what Jason Lee’s aggro comic book illustrator from “Chasing Amy” is up to these days? Enjoy the overlong scene that exists for no other reason than to check in with him and hash out the finer points of what distinguishes a reboot from a remake. (He arrives at the rather accurate conclusion that reboots are what Hollywood makes for properties that people actually care about.) Have you ever wondered what happened to the fallen angel Loki after the events of “Dogma?” Have no fear, Matt Damon himself shows up in a shoehorned cameo and tells you all about it, while also making a few Jason Bourne jokes in the process (snoogins). Smith basically just swings from cameo to cameo in the hopes that no one will care that his movie is short on actual scenes, but each appearance is a case of diminishing returns, and the lack of narrative momentum results in a sense of inertia that makes the experience feel so, so much longer than its 104 minutes. 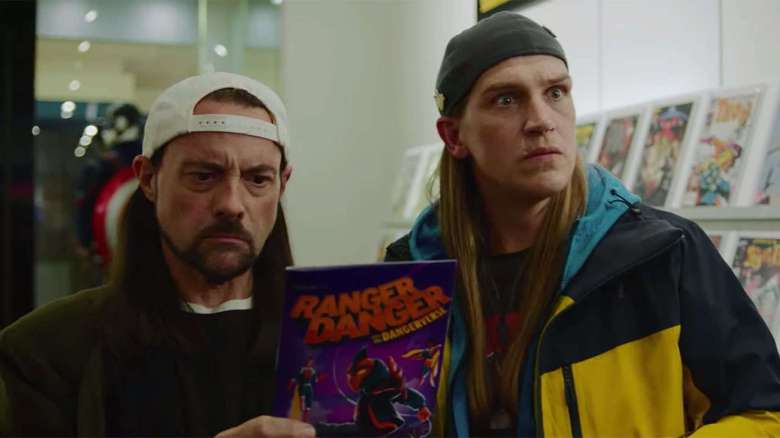 Mercifully, “Jay and Silent Bob Reboot” is saddled with actual stakes around the halfway point, when they blow into Chicago and Jay is introduced to the feisty 18-year-old daughter he never knew he had; her name is Millennium “Milly” Faulken, she’s played by Smith’s daughter Harley Quinn, and everything about that character and casting underlines Smith’s urgent need to confront what happens when the geek literally inherit the earth.

Once Milly’s (famous) parents are out of the picture, she and her diverse posse whip out a pair of switchblades and force Jay and Silent Bob to take them to Chronic-Con. Milly’s girl gang — which also includes Treshelle Edmond as a deaf black kid named Soapy, Alice Wen as a Chinese podcaster named Shan Yu, and the particularly charismatic Aparna Brielle as a Muslim American teen actually named Jihad — seem pandering at best, and problematic at worst. An earlier scene mentions that reboots are “youthful and more diverse,” and it’s hard not to fear how someone like Smith might poke fun at such iterative notions of progress. Fortunately, Smith’s love for his own kid bleeds through; Milly and her friends are as one-dimensional as the rest of the characters, but it’s crucial that the movie legitimately belongs to them as it goes along.

One major third act cameo suggests that having children requires even lifelong stars to become mere stages for someone else’s success; bolstered by Mewes’ surprisingly touching work and a much-appreciated new ending for one of Smith’s most divisive movies, the moment is a rather lovely testament to the idea that growing up doesn’t have to be about the things you lose along the way (Mewes, a recovering drug addict whose substance abuse can be felt on screen during “Jay and Silent Bob Strike Back,” has now been sober for almost a decade, and the presentness of his performance here is really quite affecting for a movie this dumb).

Does that message support or contradict that Smith continues to cast his daughter in his own films, even going so far as to build this one around her? It’s hard to say. Some parts of “Jay and Silent Reboot” acknowledge this in a way that feels like a cheap excuse, while others manage to twist it into an act of intergenerational communion. Maybe this meta-textual hail Mary is what Smith and his fans needed in order to close the book on their childhoods and embrace their future. At this point, it’s tempting to be grateful for anything that might liberate us from their past.

“Jay and Silent Bob Reboot” premiered as a Fathom Event on October 15, and will be screened as an encore showing on October 17. After that, Mewes and Smith will be touring the film around the country.