A gospel concert shot in James Turrell's Roden Crater, this God-sized experiment still feels like one of the smallest things West has done. 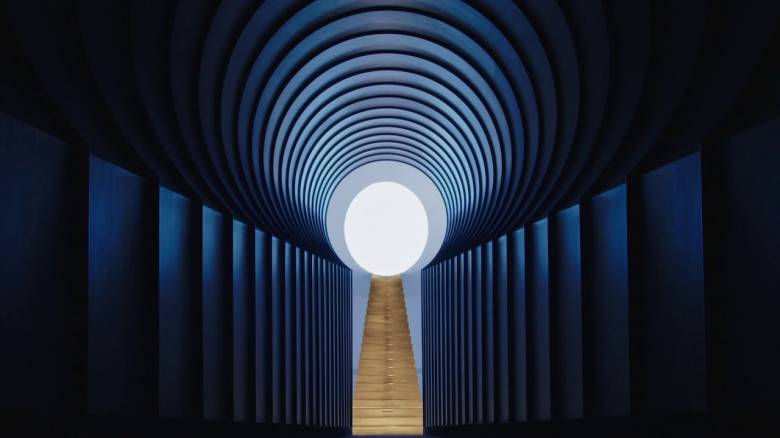 A 31-minute IMAX film that Kanye West is releasing alongside his new gospel-inflected album of the same name, “Jesus Is King” is as contradictory as you might expect from something made to support a devotional record by the self-proclaimed “greatest human artist of all time.” Equal parts reverent and narcissistic, humble and grandiose, this Nick Knight-directed curio is both a tribute to the Lord and a testament to West’s unparalleled ability to get in his own damn way.

At least the rapper seems to recognize that he’s the least interesting thing about it. For most of the movie’s brief running time — the majority of which is devoted to awe-inspiring footage of West’s Sunday Service choir singing gospel standards inside a piece of Arizona land art that looks like a portal to heaven itself — West is either not on screen or just another face in the crowd. His booming, familiar voice hammers down a hallelujah chorus in the opening scene, and then disappears until the end. The only full, new track from “Jesus Is King” is squeezed into the final movements, when it’s played over the end credits that comprise the last three minutes of this 16-story blip.

This might be a glorified ad for an album that’s been delayed more times than the rapture, but it genuinely seems more interested in taking you to church than it does sending you to Tidal (even if that means punctuating each scene with a Bible verse that prevents the movie from having any sense of flow). If the movie still feels like it’s trying to sell you on something, perhaps that’s because this needlessly abbreviated experience never amounts to anything more than an extended trailer for itself; an unsatisfying preview of a longer and less interrupted version of this project that might justify the cost of seeing it in a theater. By the time “Jesus Is King” arrives at its final shot — an extreme close-up of West cradling one of his kids, each of the rapper’s chest hairs stretching six feet across the giant screen — this God-sized experiment feels like one of the smallest things that West has ever done.

James Turrell’s Roden Crater installation makes for a majestically epic set, even if Knight and West only focus on a few critical parts of it. Turrell has been toiling on his massive naked-eye observatory in the Painted Desert since he purchased the land in 1979, and the still-unfinished masterwork offers West a canvas worthy of his cause (Turrell casually delayed the project from 2011 to 2024, a power move that makes the “Yandhi”/”Jesus Is King” hype cycle feel like amateur hour). The rapper has never been shy about his tortured faith — he walked with Jesus on one album, labeled himself a god on another, and befriended the devil a few years later — and so it’s easy to see why he might be so divinely inspired by a structure that seems like a direct line to the Lord above.

But the first look we get at Roden Crater is from above, as the film opens with a god’s-eye-view of the installation; a concrete hieroglyph cut into three miles of red dirt, it looks like something that Dr. Manhattan might have built on the surface of Mars. Knight’s camera takes us inside the structure through a keyhole-shaped entry, unlocking the sacred vault where the majority of “Jesus Is King” takes place. West fills the ovular stone room with ritual and color in a way that makes the whole place feel like “Jodorowsky’s Church,” as a few dozen singers dressed in identical brown robes file in and take their places under the cone of skylight that beams in through the natural lens cut into the roof.

Mark 1:15 hypes the crowd (“the kingdom of God is at hand: repent ye, and believe the gospel” is splashed across the screen in a sinfully hideous typeface) and then the Sunday Service group takes it from there. They belt out these percussive arrangements of gospel standards with such exultant joy that it almost renders the entire film redundant — music that powerful doesn’t really need to be seen. Knight, of course, tries his hardest to counter that feeling however he can, his long takes irising in and out on the faces in a way that frames them like the Roden Crater frames the stars above. The effect is that of a light cutting through (and forcing back) an ocean of darkness, and the pinhole approach focuses the whole of your attention into every prayer.

The film pauses for a breath (and another Bible verse) between each brief song, but Knight takes the opportunity to shoot this incredible space from a different perspective. One especially striking image results from a low-angle look at the group’s conductor as he stands at the center of the crater and ecstatically leads his choir; seen through the perfect circle that Turrell has cut into the roof above him, that sliver of gray sky makes it look as if the moon is bearing down on the conductor like an imminent Melancholia that isn’t going to stop him from smiling.

Each new set-up is remarkable in its own way, even if West and his team only make use of a small portion of what the Crater has to offer. An intimate performance of the “808s and Heartbreak” ballad “Street Lights” is transformed by the cool blue starlight that fills the room and hushes every sound into a whisper; suddenly all of West’s rhymes sound like prayers. “Jesus Is King” on IMAX is the closest that most of us will ever get to going to the Roden Crater, and the film’s best moments make it clear that West is getting more out of that space than any of us ever could, if also less than he probably should.

Like any good evangelist, West is always more compelling when he isn’t talking about himself, and he manages to resist that temptation here until almost the very last shot. Ending the film with an oblique snippet of home video that looks to have been shot on an iPhone, West seems to be implying that his children are the greatest expression of God’s love in his life. Or not. Who knows? Whatever meaning is baked into that image, it pales in comparison to the spectacle that “Jesus Is King” has shown to us so far, and leaves us thinking less about the kingdom of heaven than it does a man who acts like it’s ambassador to Earth. Maybe West couldn’t stomach the idea of being so invisible in his own movie, or maybe he always ducks out of church after 28 minutes. All we know for sure is that he and Knight shot a truly awesome concert film in Roden Crater — hopefully one day they’ll let us see it.

“Jesus Is King” is now playing on IMAX screens. The album of the same name might also be released at some point.

This Article is related to: Film, Reviews and tagged IMAX, Jesus Is King, Kanye West, Reviews