The season-closing chapter of the singular AMC show captures everything that makes the show great and hints at a cosmic Season 3. 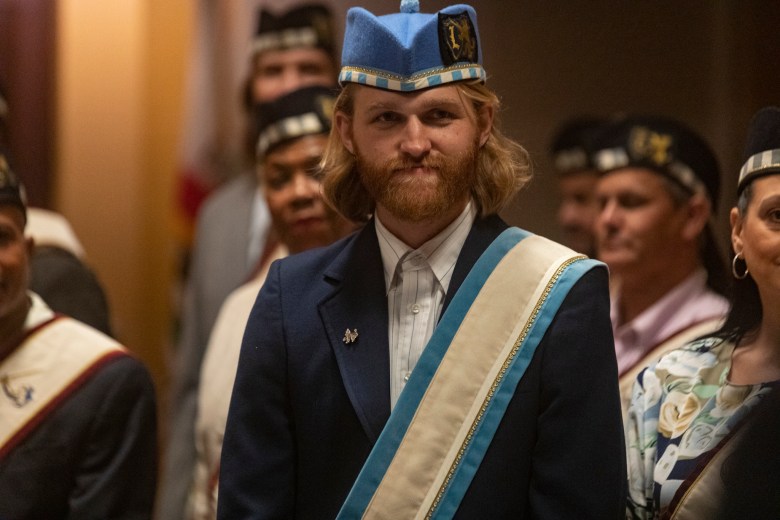 If “Lodge 49” is a family — and it certainly is — the last episode of Season 2 feels like a grand reunion. After the chaos of the show’s wild Mexico diversion in the previous two episodes, Long Beach’s beloved Lynxes gather at Lodge 49 for the coronation of Ernie (Brent Jennings) as Sovereign Protector. He and Scott (Eric Allan Kramer) bury the hatchet as they both realize they want different things from life. Connie (Linda Emond) forges the beginning of a literary career and Liz (Sonya Cassidy) even takes her first steps inside Lodge confines.

Leading up to the finale, Season 2 is filled with moments that emphasize how much these disparate characters have become united by circumstance. The beginning of a communal van ride, a collective thanksgiving around a table at a restaurant known for its dumplings, one wild escape to secure the scrolls that have been the seasons-long goal to obtain: all of those lead to a season-closing hour that finds each character taking stock of where this international quest for meaning has left them, with Dud (Wyatt Russell) staying the unspoken force helping to bind them all.

“I think it’s kind of central to the main kind of arc of the season in which Dud has entered this place that he loves and he’s kind of watching it fall apart,” series creator Jim Gavin told IndieWire. “Everyone is isolated and he’s trying hard to keep everyone together. We really wanted to make them have an impact when we do get everyone together. I think Ernie’s coronation fits the bill.”

“If you think of the very first shot of very first episode of ‘Lodge 49,’ Dud walks into this panoramic, cinematic wide shot of the beach and he’s this tiny fellow who’s alone. That’s the starting place. I think for us it’s always trying to visually tell the story about people connecting,” showrunner Peter Ocko said.

And it’s not just Dud. The idea that what gives this finale some triumph is people coming together rather than moving on is one thing that separates “Lodge 49” from so many of its TV peers. 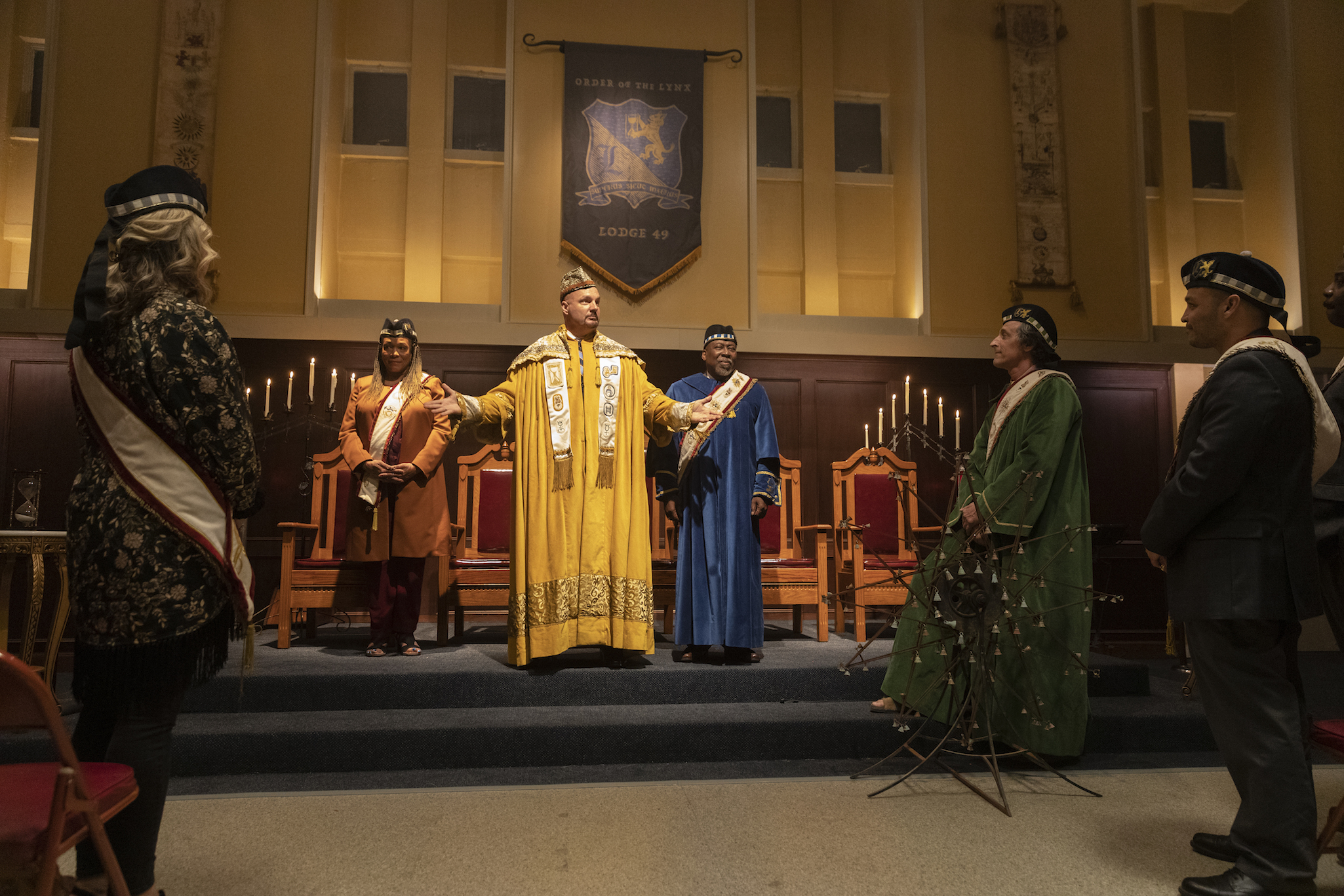 “These characters are less aspirational, I think, than TV usually forces these characters to be. It’s not about success, ever. It’s about achieving. It’s almost about going backwards and finding the nostalgic place,” Ocko said. “It’s slightly different than I think we’re used to on television. Usually success is to make a lot of money and get out of a place that you were kind of happy in, but you’ll be happier somewhere else. Our characters just don’t think that way.”

Even within that joyful reunion, “Lodge 49” allows that optimism to come hand in hand with an acknowledgment that things can still be difficult and unresolved. Dud, who historically has been the glue holding these people together, shares some of the last moments before Ernie’s coronation explaining some conflicted feelings. Ernie’s reassurance doesn’t change Dud’s ongoing realization that his newfound happiness only came about because of events set in motion by the death of his father.

“I think we take the position that being the fool does not mean you’re naive. Dud most definitely plays the fool in our mythology. But he is as real as anyone and capable of suffering and tragedy. He just has a different way of absorbing all that than the rest of us,” Ocko said.

Much like Season 1 had a jolt at the end of its epilogue, the final minutes of Season 2 make that even more literal, with Dud on the receiving end of a well-placed lightning strike. He collapses into the mud outside his trailer as he sinks down toward an uncertain fate. If this ending feels like more of a cliffhanger than Season 1’s did, that’s by design.

“I think the symmetry we really enjoy is Dud having a near-death experience. Whether it’s a shark attack or a bolt of lightning, I think we will always come back to that,” Ocko said. “We did want it to feel like an evolution of Season 1. We didn’t want to just do the same thing. I think this leaves you in a bit more of a mysterious place, a ‘to be continued’ rather than the sense of peace that Dud had at the end of Season 1.” 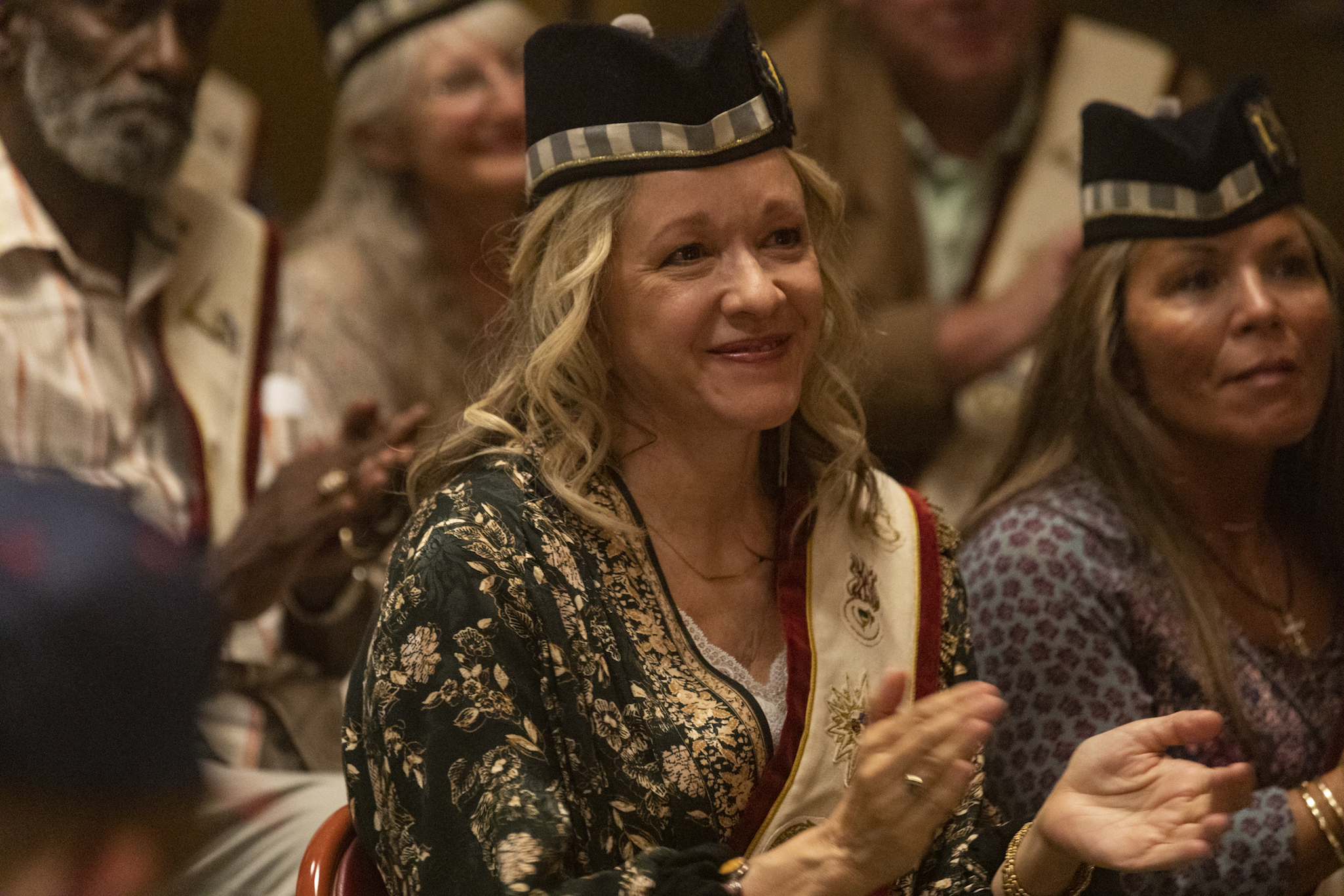 That “to be continued” comes at the end of a season that not only featured multiple Mexico excursions, but also shone more light on Jackie Loomis’ (Cara Mantella) place in Lodge lore, which Gavin says was a major puzzle piece in getting the full scope of what these characters are dealing with now and what they might face going forward.

“We’re very concerned with the history and past of the Lodge — both Long Beach and across the world — and the way it seems to be having a larger impact on our characters’ present moments,” Gavin said. “We love deepening the world, the inescapable quality of history and the places you live and what’s happening around you.”

“Time travel is part of our show and I think that would be true of any season we do,” Ocko said.

That DNA gets expressed in the two different endings that close out Season 2. The last thing that the show filmed for the season is the penultimate sequence, with Liz and Dud fulfilling the last El Confidente loose thread painting and floating in the Pacific Ocean.

But the season’s big kicker is the payoff to the door-to-nowhere that’s been quietly hanging over much of the Season 2 goings-on. Right before the season cuts to black, Dud tumbles backward from the opened door, falling alongside the dirt we presumably watched him get sucked down along with. It’s a puzzling parting shot, but it’s one that Ocko and Gavin say they had in mind from the beginning of the season.

“This season is our fire season and it was the season where Ernie would get back to the throne,” Ocko said. “We knew that was the last image. To us, it’s part of a bigger story. We have more to tell with Dud and it does involve the past and time.”

“For us, every scene is both in-the-moment and anticipating something else,” Gavin said. “The door itself, we’ve been heading there all along.”

“Lodge 49” Season 2 is now available to watch via AMC.

This Article is related to: Television and tagged AMC, Lodge 49, TV Interviews