Only the world’s biggest movie star could upstage her own movie with each fearsome scowl.

Angelina Jolie has been in far better movies than the “Maleficent” franchise, but they provide an unparalleled platform for her appeal. The same birdlike monstrosity of the first entry, cloaked in feathery gothic opulence and angular sub-human cheekbones, careens through “Maleficent: Mistress of Evil” with the spirit of German Expressionism beating her wings. There’s such delicious flamboyance to this striking villainess that she outshines the latest heavy-handed Disney refashioning of the Sleeping Beauty story all over again. Only the world’s biggest movie star could upstage her own movie with each fearsome scowl.

The “Maleficent” universe is loaded with entrancing surfaces and the illusion of deeper significance, but no amount of far-reaching metaphors and complex mythology can obscure run-of-the-mill storybook intrigue. An overlong blend of kid-friendly “Game of Thrones” warfare and standard-issue metaphors of intolerance, “Maleficent: Mistress of Evil” finds plenty of ways to build on the original premise, but few that resonate any better than the last flamboyant ride.

“Maleficent: Mistress of Evil” is directed by Joachim Rønning, in the Norwegian filmmaker’s first credit since 2017’s misbegotten “Pirates of the Caribbean: Dead Men Tell No Tales.” That messy blockbuster found Rønning and co-director Espen Sandberg making an ill-advised descent into studio-mandated storytelling following their Oscar-nominated Norwegian adventure “Kon-Tiki,” which looks downright quaint compared to the sheer scale of the playground here. Nevertheless, having collected whatever paycheck made this deal so enticing, Rønning is overdue to return to more original material. The continuing adventures of Maleficent don’t really belong to a single filmmaker’s vision, aside from Jolie’s own auteuristic presence, which elevates her every scene. But she can only do so much to ameliorate the deja vu in play.

At the end of the surprise 2014 blockbuster, the scheming fairy of the magical Moors forest accepted her maternal role over newly anointed queen Aurora (Elle Fanning), whose bland romantic interest Prince Phillip (Harris Dickinson, taking over from Brenton Thwaites) finally proposes to her as the new movie opens five years down the line. Maleficent scowls and huffs from atop her dramatic perch overlooking the fairy kingdom when she receives the news from her reliable shape-shifting spy Diaval (a shifty Sam Riley). There’s a reason why the character’s first lines — “Don’t ruin my morning!” — receive a key needle-drop moment in the movie’s trailer: Despite the epic fantasy that follows, Maleficent’s dyspeptic reaction shots define this movie’s appeal just as much as its predecessor.

“Mistress of Evil” attempts to match that threat with another alluring dame — Prince Phillip’s scheming mother Queen Ingrith, played by Michelle Pfeiffer in her own cartoonish embodiment of Disneyfied villainy with less distinctive results. Ingrith insists that Aurora bring her adopted mother to the family’s kingdom for a celebratory engagement feast, so Maleficent can commune with Aurora’s new in-laws. It’s an awkward ice-and-fire variation on “Guess Who’s Coming to Dinner?” that wouldn’t seem out of place on “Robot Chicken,” at least until the conversation turns to politics — yes, politics — insofar as they involve the ongoing battles between humans and fairies at the boundary separating their domains. 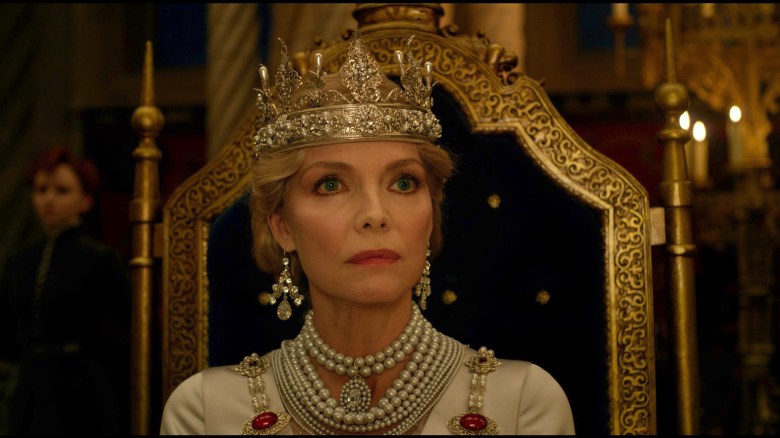 Before you can say “deplorables,” Maleficent goes postal on her human guests and King John (Robert Lindsay) lies comatose, seemingly trapped by another one of Maleficent’s debilitating spells. The fairy flees for the skies just as the kingdom’s defenses fire a bullet in her direction, sending her careening into the ocean depths below. So begins Maleficent’s journey to the Resistance: Rescued by another winged being much like herself, she finds herself in the shadowy bunker of likeminded creatures cast off by the human world and eager to find their revenge. These include the passionate Conal (Chiwetel Ejiofor, buried in horns, extensive makeup, and a befuddled expression) and the vengeful Borrow (Ed Skrein), a furious Valkyrian presence who issues rallying cries for his kind to take back their prominence in the evolutionary chain. Maleficent’s first encounter with these beings in their shadowy lair is abstract enough to work onstage as a Wagner remix, and makes for a genuine cinematic highlight in a two-hour movie that works best in pure visual terms.

Maleficent’s radicalized by her new peers, unaware that it’s all part of Queen Ingrith’s maniacal plan to goad her foe into battle, but the movie takes its time building up to that rather obvious revelation. Perhaps it assumes some audiences aren’t trained to connect the dots.

For younger viewers, the “Maleficent” movies are certainly a gateway drug to more complex cinematic experiences, but in other ways they invite complex discussions around the dinner table. The war between humans and fairies sets the stage for debate about opposing races jockeying for dominance, but the metaphor grows murkier as it moves along. It’s also fairly irrelevant once the movie finds its way to the battlefield, for a redundant climax undercut by an oddly upbeat finale in which some of the more macabre developments are shrugged off with a creepy nonchalance. Embrace the imagery and “Mistress of Evil” almost works on its own terms, but anyone grasping for the bigger picture will find that it often evaporates under scrutiny. When Maleficent takes flight, the movie soars along with her, but the storytelling is always on shaky ground. At least Jolie is always there, glaring through the screen, casting a mighty spell of her own.

This Article is related to: Film, Reviews and tagged Angelina Jolie, Maleficent: Mistress of Evil, Reviews