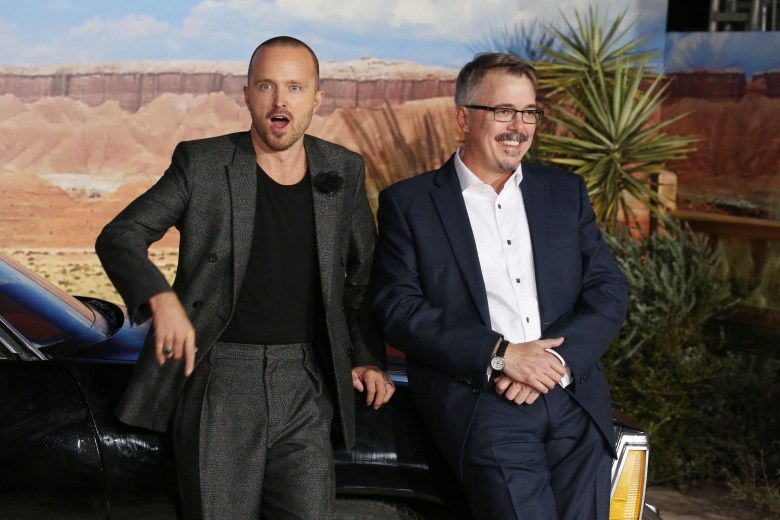 On Friday, Netflix drops the highly-anticipated “El Camino: A Breaking Bad Movie,” finally answering “Breaking Bad” fans’ questions about what happened to Jesse Pinkman (Aaron Paul) following the critically-acclaimed show’s series finale. It still feels surreal that a “Breaking Bad” movie is even happening in the first place—it won’t truly feel real until it’s actually on Netflix, you know?—but for writer-director Vince Gilligan and leading man Aaron Paul, the feeling’s more cathartic than anything else.

And from the looks of Netflix’s official behind the scenes featurette for “El Camino,” Gilligan and Paul clearly hope the feeling’s mutual when it comes to people watching the movie. “I think all of our fans will just be so thrilled to see this next chapter,” said Paul. “I think it really gives some closure for this character.”

“The Jesse Pinkman story post-‘Breaking Bad’—I’ve been looking forward to doing this for years,” said Gilligan. According to Paul, when he first got the script, it was simply titled “Vince Gilligan ‘SPECIAL PROJECT’.” And now “El Camino” is a reality that both he and Gilligan admit felt like coming home.

In the behind-the-scenes featurette Matt Jones and Charles Baker, who reprised their roles as Badger and Skinny Pete, respectively, also showed some nostalgia about the series turning into a movie. “It was like going back to your high school reunion,” said Matt Jones, who is reprising his role as Badger, alongside Charles Baker’s Skinny Pete. “If your high school sold meth.”

The promo cycle for “El Camino” has cleared up a few of the loose ends in the wake of the series finale; Gilligan finally definitely confirmed that Walter White is, in fact, dead.

Gilligan recently appeared on “The Rich Eisen Show” (via Esquire) and was asked whether or not Walter is alive or dead. Gilligan has been notoriously non-definitive when it comes to answering this question in the past. In a 2017 Reddit AMA, Gillian replied to a fan, “Sure looked that way to me!,” which was more of a suggestion than an outright confirmation. Fortunately, Gilligan was feeling definitive when speaking with Eisen.

“Yeah, I’m gonna give you that one, Rich, because I love you so much,” Gilligan said. “Yes, Walter White is dead. Yes.”

But other surprises are in store. Check out the behind the scenes featurette below: