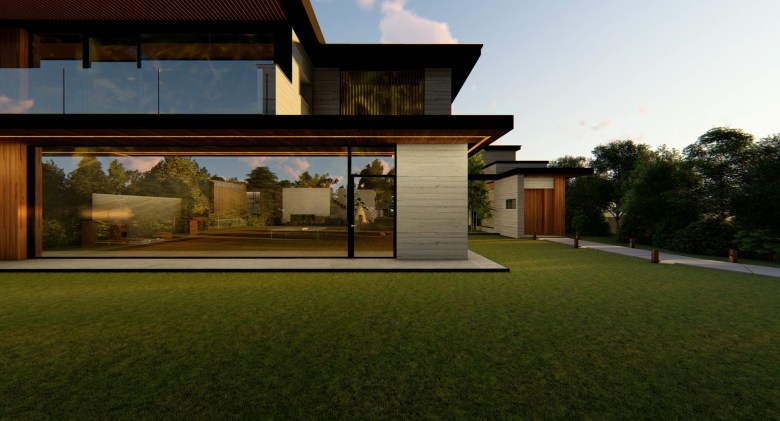 Korean director Bong Joon Ho’s Palme d’Or-winning “Parasite” has been praised for its deep insight into class warfare, but its set design is equally impressive: The movie finds a poor family conning its way into the affluent Park household, gradually taking over their lives, and an estimated 60 percent of “Parasite” takes place in the wealthy Park family home. Most viewers may not realize that the entire set was built from scratch.

In the movie, this marvel of modern architecture was designed by a fictional architect named Namgoong Hyeonja. In truth, it was the brainchild of “Parasite” production designer Lee Ha Jun.

“Since Mr. Park’s house is built by an architect in the story, it wasn’t easy finding the right approach to designing the house,” Lee explained in a translated email interview with IndieWire. “I’m not an architect, and I think there’s a difference in how an architect envisions a space and how a production designer does. We prioritize blocking and camera angles while architects build spaces for people to actually live in and thus design around people. So I think the approach is very different.”

According to Bong, the challenge he gave his “Snowpiercer” production designer was not only to create a believably “visually beautiful” set, but a stage that served the precise needs of his camera, compositions, and characters, while embodying his film’s rich themes. In an interview with IndieWire, Bong described the home as “its own universe inside this film.” He added that he took pleasure in hearing that the famous directors on this year’s Cannes jury — which included Alejandro Gonzalez Iñarritu, Yorgos Lanthimos, and Kelly Reichardt — were all convinced that the movie took place in a real home.  In truth, Bong asked his production designer to create an “open set,” built on an outdoor lot.

The Park family home is one of the most astounding pieces of production design in recent cinematic memory, and the story behind its creation adds a whole new layer of complexity to Bong’s masterpiece. Here, Bong and Lee break down the approach, with exclusive images from the design process. The interviews have been condensed and edited for clarity. 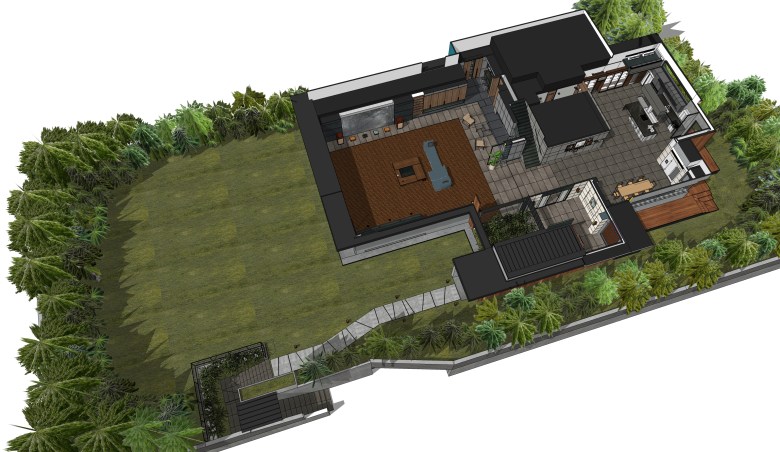 Multiple Parasites In One Home

Bong: I think what’s really unique about this film is this idea of infiltration and that’s something that came from my [early career] experience as a tutor. When I was tutoring, I really felt like I was infiltrating this family, and that’s where my inspiration came from, but ultimately I wanted to tell a story about people around me, who aren’t criminals, infiltrating a particular home.

So this is a spoiler, but in the story, and no one says there should only be one parasite in a host, so the story is about discovering that there are already parasites that settled down in the host, much before them. But I like the audience to go in without knowing the second half, so I can’t go into more detail.

I had to really meticulously design the house itself. It’s like its own universe inside this film. Each character and each team has spaces that they take over that they can infiltrate, and also secret spaces that they don’t know. So the dynamic between these three teams and the dynamic of space, they were very much intertwined and I think that combination really created an interesting element to this film. 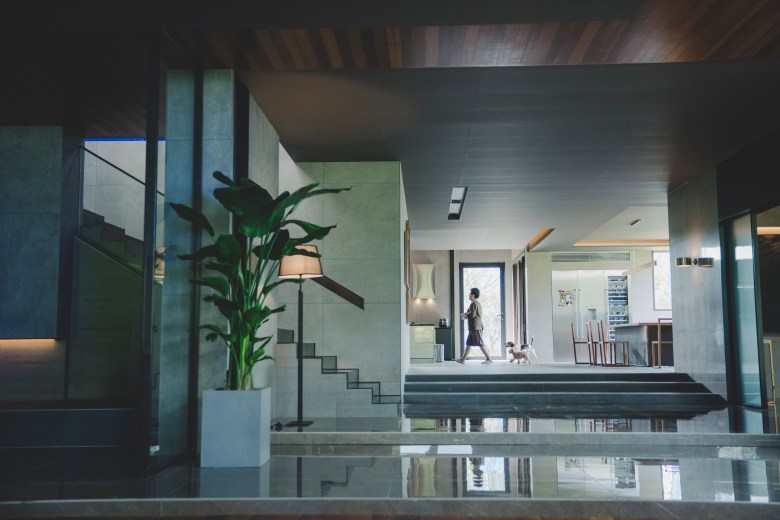 Bong: The story just demanded all those things in terms of blocking, like if someone is in a certain position, the other character had to spy on them; if someone’s coming in, another person had to hide behind a corner. So these very basic spatial relationships between the characters were already established.

Lee: It was important to design a space that met these blocking requirements. Of course, they were up for change depending on the camera angle, but we determined the camera position while designing the space to reflect them in the overall design. I designed a structure that’s wide and has depth rather than height so that the house suits the 2.35:1 aspect ratio. 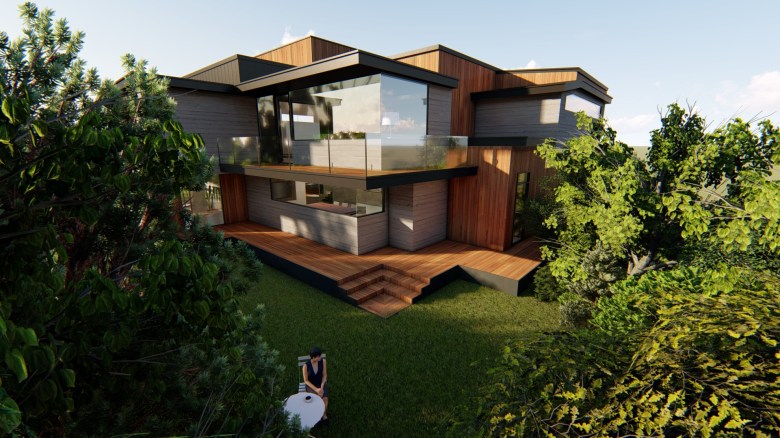 Bong: Cinephiles may be reminded of Akira Kurosawa’s “High and Low.” In that case, the structure is simpler and stronger. The Japanese title is “Heaven and Hell.” On the top of the hill is a rich guy and in the bottom, there is the criminal kind of structure. It’s basically the same in “Parasite,” but with more layers.

Because the story is about the rich and poor, that’s obviously the approach we had to take in terms of designing the sound and lighting. The poorer you are, the less sunlight you have access to, and that’s just how it is in real life as well: You have a limited access to windows. For example, in “Snowpiercer,” the tail cars didn’t have any windows and with semi-basement homes, you have a very limited of sunlight you get during the day — maybe 15 or 30 minutes — and that’s where the film opens.

We actually used natural lighting for those scenes in “Parasite.” All of our sets, the rich house and the poor house, were built on outdoor lots.

Lee: Mr. Park’s house is an outdoor set built in consideration of the sun’s direction. The sun’s direction was a crucial point of consideration while we were searching for outdoor lots. We had to remember the sun’s position during our desired time frame and determine the positions and sizes of the windows accordingly. In terms of practical lighting, the DP [Hong Kyung Pyo] had specific requests regarding the color. He wanted sophisticated indirect lighting and the warmth from tungsten light sources. Before building the set, the DP and I visited the lot several times to check the sun’s movement at each time, and we decided on the set’s location together. 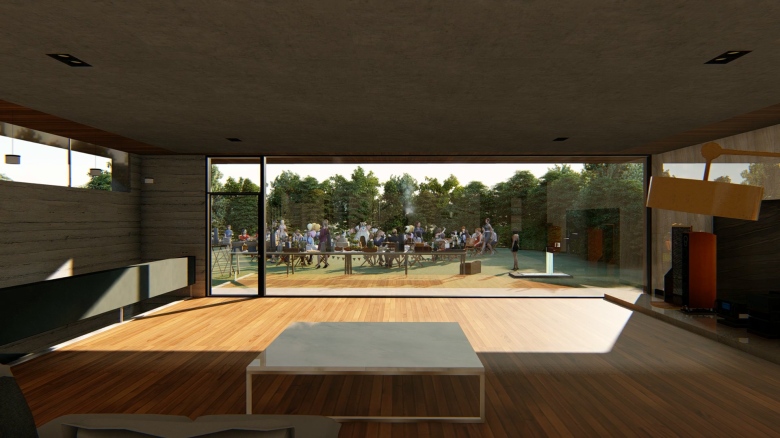 The Front Garden as the Family TV

Lee: We didn’t shoot the interior and exterior separately; we just had to create a perfect house… Both the main front yard, which you see as soon as you enter the house, and the backyard, were built specifically for the film. The front yard was a key reason why he had to build Mr. Park’s house. Director Bong already had the actors’ blocking in mind.

Bong: For that last scene where the father walks out into the garden, we had a lot of sunlight then, and it’s all natural lighting. It’s very difficult to get that same mood or picture with artificial light, and that’s why we put in so much care when we were building the set. We shot that in the morning when we had a lot of sun.

Lee: This is the reason why Mr. Park’s first floor living room doesn’t have a TV. Director Bong mentioned that the architect in the story, Namgoong Hyeonja, built the first floor living room for the sake of appreciating the garden. So we created the window wall in accordance with the 2.35:1 aspect ratio, and I wanted the large living room and garden to feel like a nice photograph on screen. 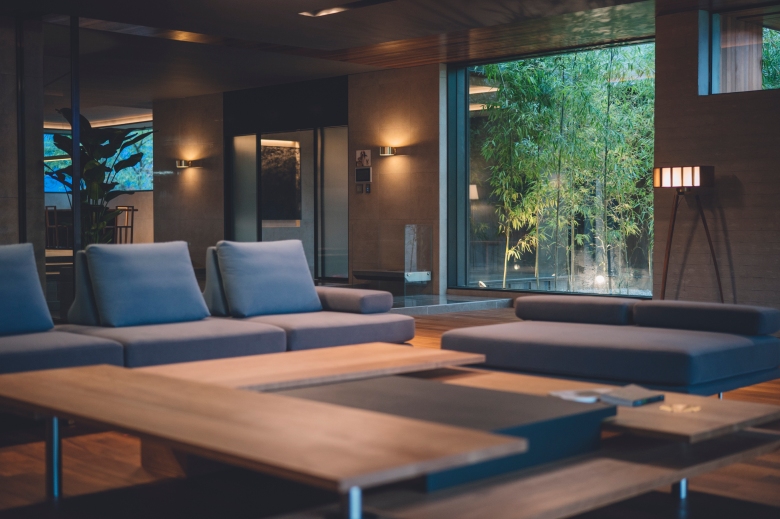 We didn’t use a lot of colors for Mr. Park’s house. For interiors, we mostly used dark wood and grey-toned materials to accentuate its contrast with the exterior, and placed yellow-toned practical lights to create a sophisticated and warm atmosphere. During set construction, we planned it so that we could freely adjust the color temperature and light colors of the practical lights.

This is a story about co-existence, but both Director Bong and I were certain that we had to show clear contrast as well. That contrast is maximized in how the appearance of the neighborhoods gradually changes when the family endlessly descends from top to bottom.

Lee: There are actual houses with high walls and large gardens in elevated neighborhoods of Seoul. But the staircase is one of the key visual elements of this film. Director Bong was very precise with his demand that everything must continue to descend from top to bottom. The appearance of the neighborhoods had to gradually change. There had to be more rain and more water to complete the overall nuance and spatiality of the film.

We did, however, struggle with the numerous staircases on location—the numerous power lines and staircases we see as the family comes down. Both Mr. Park’s rich house and Kitaek’s semi-basement house feature several staircases of varying size within the homes. They go up and go down. I’ve never created so many staircases while working on a film.

Bong: It’s important that the characters are moving down, but what’s more important is that water is moving with them: Water is flowing from top to bottom, to the rich neighborhoods to the poor ones, and these characters they have no control over it. The water that flows down with them ultimately floods their entire home. I think that’s the really sad element of that sequence.

Lee: And that’s why the protagonists are living in this unique structure of semi-basement homes. I didn’t add that to just show a very Korean element of story. There’s a more specific meaning behind it, because the semi-basement is basically of the middle of high and low. There’s this fear that you can fall even further below but you still feel hope that you’re still half above-ground, so it really reflects this liminal space that they’re in, and the spaces in this film are even more compartmentalized and all connected through a very complicated staircase.

It was a set. There are actual locations with similar looks in Korea, but we built the set because we had to flood the entire neighborhood. Nonetheless, we wanted to avoid having it look like a set. We thought of the space as another actor. I told the art and set department that instead of trying to build Kitaek’s semi-basement neighborhood, we should just bring it over.

We got a lot of ideas from places that were being redeveloped, and we created silicone molds of actual bricks from those neighborhoods to create our own. A lot of legwork was involved from the art, set and prop departments. We went around finding tiled doors, window sash, window screens, windows, gates, smoke pipes, power lines and the like. We spent a lot of time asking for permission to take and purchase them. It took months just finding the materials. And then we started placing them onto the set that was already somewhat designed.

There were incidents where we had to adjust the design because the door sizes were different, and that process ended up creating a completely different space. If you think about it, the people who live in those neighborhoods spend decades fixing and repairing things, and a lot changes from how the houses used to be. So the neighborhood started expanding and coming together one by one, eventually creating the details of the space. 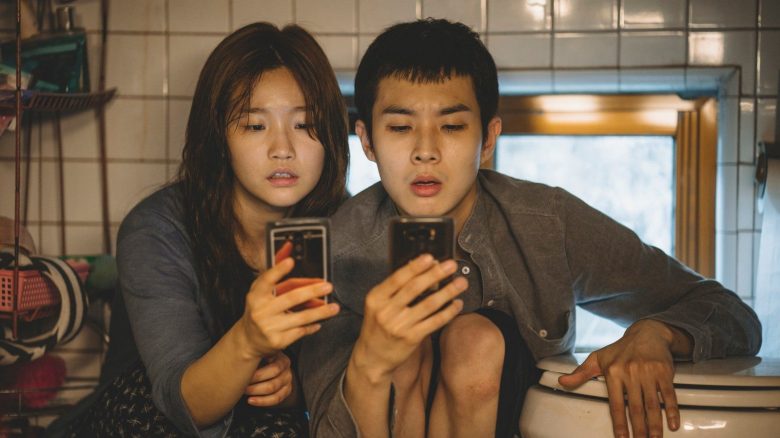 Lee: That was how the space was described in Director Bong’s script. I remember the script calling it the temple of excrement. In Korea, we have what’s called semi-basement houses and some semi-basement bathrooms are structured that way. However, we did consider the camera angles to adjust the size and proportions of the space so that the toilet could be as close to the ceiling as possible.

During college, I temporarily lived in a semi-basement house that looked exactly the same with a roommate, so I thought of those times while forming the space. I remember complaining about how moldy and inconvenient that bathroom was, but I found myself recalling those memories to design the exact same space.

This Article is related to: Awards and tagged Bong Joon-Ho, Parasite, production design