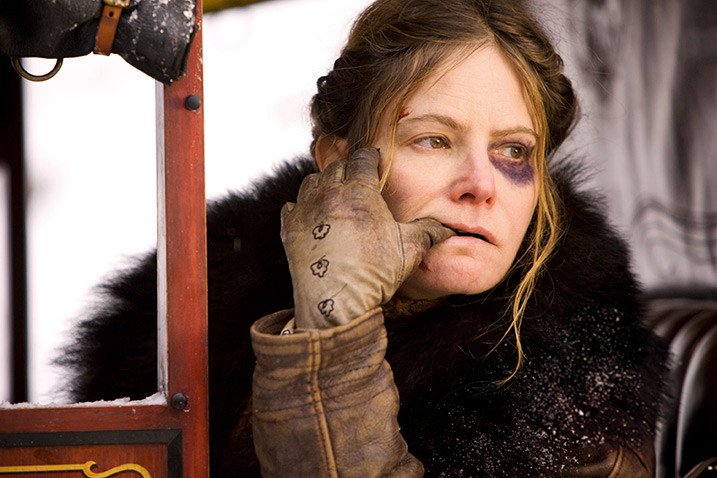 When Quentin Tarantino’s “Once Upon a Time in Hollywood” debuted at Cannes earlier this year, much of the headlines about the film’s world premiere centered around a press conference in which the writer-director was criticized by a reporter for giving Margot Robbie limited dialogue in the film. Tarantino’s viral response (“I reject your hypothesis”) reignited the debate around his treatment of female characters. While Tarantino has been praised for the likes of Jackie Brown and The Bride, he’s come under fire for characters like Broomhilda in “Django Unchained” and Daisy Domergue in “The Hateful Eight” who are constantly brutalized in their films.

A significant part of Tara Wood’s new documentary “QT8: The First Eight,” which hit theaters October 21, is spent reminiscing on Tarantino’s female characters. Actresses who have worked with Tarantino stand by his depiction of female characters and champion his writing. “He writes women like nobody’s business,” says Jennifer Jason Leigh, who played the controversial Daisy Domergue. The actress cites “Jackie Brown” as a quintessential example, praising Pam Grier for a performance that is “so amazing and so beautiful and so flawed and so desperate, and yet so steely.”

“The fact that he always has women in these strong positions isn’t something that he necessarily highlights or billboards,” says Tarantino’s “Kill Bill” star Lucy Liu. “To him, of course it makes sense these are women that are fighting or are leaders. For him it’s just natural.”

Zoë Bell has been a collaborator of Tarantino’s since “Kill Bill,” in which she served as stuntwoman for Uma Thurman. Bell has been involved in every Tarantino feature since, getting a starring role in “Death Proof” and memorably popping up in a cameo appearance in “Hollywood.” Bell says Tarantino “makes roles for women that he wants to see.”

Bell adds, “It’s an interesting conversation to have these days, girl power and equality. It sort of feels like it’s all coming to a head. The biggest feat is making it normal that we are in lead positions as opposed to it being the fight. That’s where Quentin is a priceless ally. I don’t think he needs to sit in an interview and be like, ‘Listen women should have these roles.’ He doesnt have to drive it because he’s just presenting it as such.”

Tarantino is expected to factor into the upcoming Oscar race in a big way thanks to “Once Upon a Time in Hollywood,” which could land Tarantino alone three nominations for Best Picture, Best Director, and Best Original Screenplay. While some critics found Robbie’s lack of dialogue as Sharon Tate emblematic of Tarantino’s woman problem, others championed Tarantino’s positioning of the character in the film. Tarantino defended his portrayal of Tate in an interview with Deadline.

“I thought it would both be touching and pleasurable and also sad and melancholy to just spend a little time with her, just existing,” Tarantino said. “I didn’t come up with a big story and have her work into the story so now she has to talk to other characters and move a story along. It was just a day in the life…driving around, running errands, doing this, doing that, and just being with her. I thought that could be special and meaningful. I wanted you to see Sharon a lot, see her living life. Not following some story, just see her living, see her being.”