With impeachment in the offing and a new app donating real money to Democrats, the late-night host is gearing up for next year's "nutso" election. 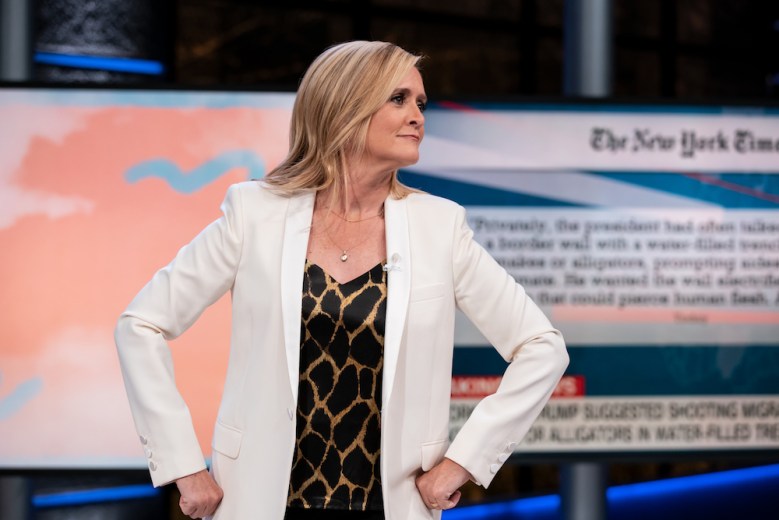 With the debates well underway, the 2020 Presidential Election is already looming — and Samantha Bee is already building “Full Frontal’s” attack plan for the surefire hellscape.

“We go to work, we read magazines, we sit in a shiatsu chair, and we try our best to scrape together something to talk about on the show. The end,” Bee said in a recent interview, before listing her actual state of mind via action verbs. “[flips table over] [goes to sleep in a corner] [cartwheels out of the room] Yeah, it’s crazy out there.”

Indeed it is, as one of the most dreaded and anticipated elections in modern memory is contending for news coverage during modern America’s 24-hour news tumult. Oh, and there’s also that little thing about Congress preparing impeachment hearings.

“I could probably use 80 percent less breaking news, and still make a good, high-quality show,” Bee said. “We try really hard to shine a light on stories that aren’t getting attention. [But] in the last couple of weeks, we’ve focused a lot on impeachment because how can you not? It’s stunningly, overwhelmingly, a lot of news, and the story’s changing all the time. We also want to be relevant.”

Balancing big picture stories with breaking news has been a constant juggling act for every newsperson, but for late night hosts especially, as delivering the day’s or week’s talking points becomes more challenging as more and more stories stack up. Plus, you know, they need to be funny.

That struggle will only be amplified as the 2020 election gains steam. Bee said “Full Frontal” will be making trips to Iowa, New Hampshire, and the Democratic National Convention, timed to the caucus, primary, and presidential nominating vote, respectfully. But she also knows the coverage itself has to go beyond what happened in 2016, shortly after “Full Frontal with Samantha Bee” first premiered.

“When we launched the show, it was all this fun footage of behind-the-scenes at the Republican Convention — Ben Carson got lost backstage, and it was hilarious,” Bee said. “People were just fumbling around in the dark trying to figure out how to deal with Trump and his antics on-stage, pacing behind Hillary Clinton. [Now], everything got much darker and more serious, and I think that we’re seeing this evolving, terrible story, and now we’re facing another federal election with impeachment proceedings. So it is just a different world.” 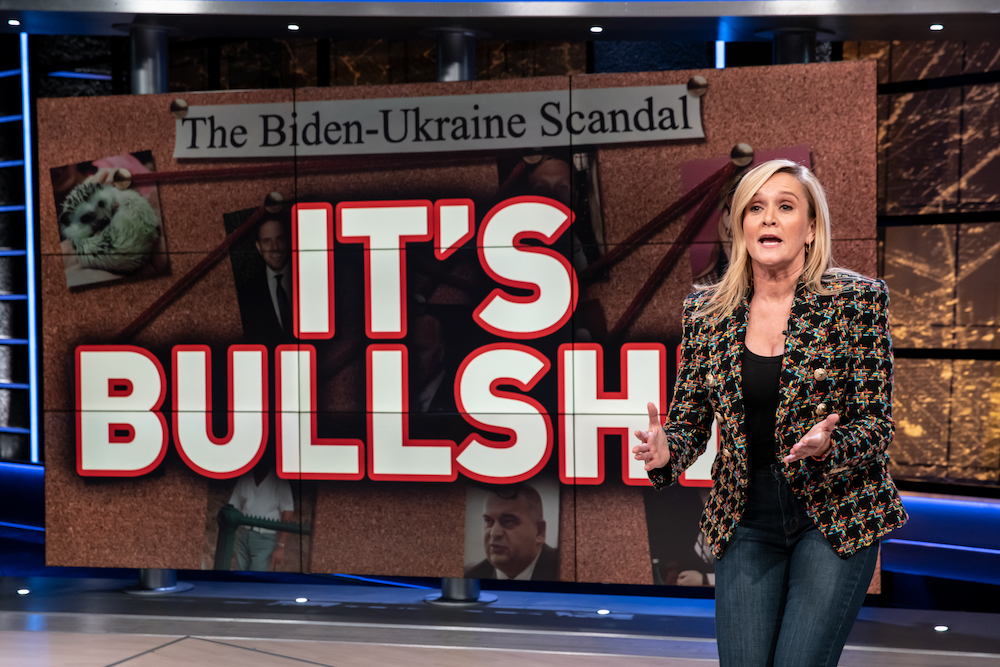 Bee doesn’t believe the pending impeachment proceedings will end with Trump out of office — “My gut says no, but I hope I’m wrong. I truly hope I’m wrong” — but that only magnifies the election’s significance. If Trump isn’t ousted prior to November 2020, the public has to vote him out. So for as much focus has to be given to the serious crimes driving impeachment, “Full Frontal” can’t ignore all the other issues that make Trump a dangerous choice.

Bee isn’t shy about about taking sides. Just look at her latest effort to engage voters: “Full Frontal’$ Totally Unrigged Primary” app (available November 6). Following her first app-based trivia contest, “This Is Not A Game: The Game,” Bee’s new “comedy-based, election-related” game will allow players to join their favorite candidate’s team and compete in daily challenges to earn the candidate points. The app itself is free, but players can donate to the game’s PAC-controlled fund (called Sam Bee’s Political Swear Jar) and the winning candidate will receive a real cash prize from the donations.

“To me, that’s the most interesting part of this game: that you don’t really have to love or even watch the show to be invested in the game,” Bee said. “If you’re invested in a candidate or even gently like a candidate, you’re playing for that person.”

The questions are funny, but the information is as valuable as the money being donated. Bee’s PAC fund will be distributed right before the Iowa Caucus in February 2020, and as she said in the app’s announcement video, they’ll give the money to whoever wins — “even if that candidate is Joe Biden.” Jokes like this carry an edge for consistent viewers, who’ve seen Biden routinely taken down a peg as his campaign stumbles. The jokes, suggestions, and implications don’t reflect bias; they’re analyses put through Bee and her team’s invaluable filter.

“Really, the show emerges from what we are authentically thinking about on the premises,” she said. “We are doing the show as much for our audience as we are for ourselves, to actually process what’s happening, so we try to give ourselves leeway to do that as well. […] I’m proud to tell the stories we tell on the show. We don’t take it lightly.”

Whether it’s reporting from the campaign trail or trying to reach a new audience outside the show, Bee is determined to be heard. Cutting through the news clutter is one thing, breaking it down to be widely accessible is another — and the multiple Emmy-nominee has done both.

“We’re going to be tracking the election cycle very deeply, so we’ll figure out ways to make all of that really fun,” she said. “It’s going to be nutso. It’s going to be bananas out there. So, see you on the campaign trail.”