While this return episode is not as good as the original, Chance the Rapper still can't help but be the near-perfect host. 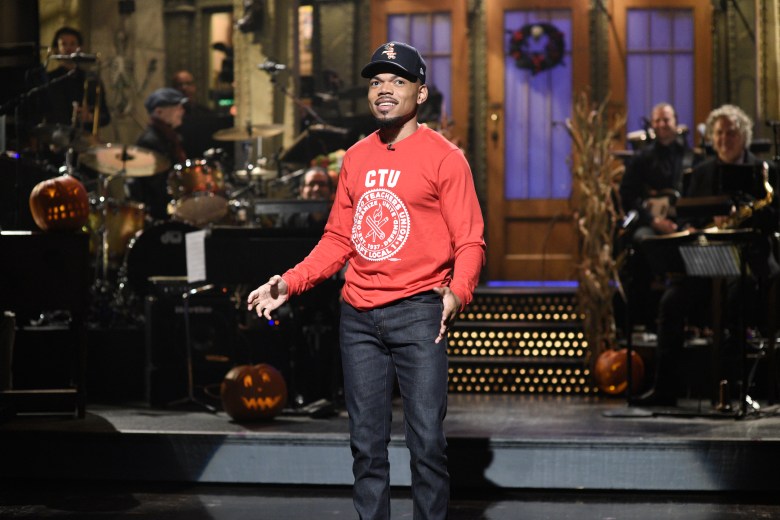 This week’s somewhat Halloween-centric “Saturday Night Live” featured the return of Chance the Rapper, using his past experience as both a former host and musical guest — never at the same time — to this time do double duty in the same night.

While this return episode is not as good as his first time hosting back in Season 43, Chance still functions as a really good host for those same reasons. Although, based on his monologue about how second time’s the charm — which is why he loves being from the Second City, Chicago, so much — he’d obviously argue that this episode is even better. He’d lose that argument, but he’s at least got a leg to stand on his monologue rap when he says he prefers “Angel” to “Buffy the Vampire Slayer.”

Other than the sketches themselves, the biggest issue with Chance’s turn at hosting this time is his fit of the giggles in every live sketch. The only sketches where it really makes sense were “Love at First Sight” — where the women absolutely break too, as live-wire work is just asking for everything to fall apart — “Dance Rehearsal,” as Kenan Thompson starts that sketch at an 11 and ends it at a 20.

During his first time hosting, Chance played this character Lazlo Holmes — a basketball correspondent who ends up filling in for non-basketball sports — at a hockey game. The sketch was well-received, and Chance has even reprised the role for bits with the actual NHL. Lazlo Holmes is perfect fodder for recurring character status, as we get here, with him tackling the world of e-sports. Both sketches have had some blowback about the joke being that black people don’t do certain things — and in 2019, the idea that black people don’t play video games is just ridiculous — but the joke is clearly more about a black jock who has no idea of anything outside of his narrow view of the sports world.

However, as has been the case in at least one sketch per episode this season, Bowen Yang is the true MVP of the sketch, as the gamer S3X PANDA 99. Yang continues to show his versatility with every sketch.

Like the “Dog Court” sketch in the David Harbour episode, the “Judge Barry” first impressions sketch feels like the type of thing that belongs more on “The Amanda Show” than “SNL.” Also, while there was a week-long break, that’s still two episodes in a row of courtroom sketches — and it’s already getting old. This sketch works slightly better, perhaps because there are no dogs going into business for themselves, but neither sketch is particularly great. Just pleasant. And this one has a random Jason Momoa cameo, with him botching a line and calling himself “a certified paraplegic-legal!” “Judge Barry” is definitely a sketch that relies on sight gags, since it truly is all about the first impressions, and there’s fun effort put into on that front (like what Thompson is wearing).

“Dance Rehearsal” isn’t exactly Best Sketch of the Night material, but it is impressive. Because Thompson goes from doing little in this episode — besides his one bit in “Judge Barry,” his other sketch was cut for time — to stealing the whole damn show. Thompson yelling “THE MOON!” is pretty much all the sketch needed to be funny — just ask Chance — but the point about the different versions of blinds is a really good touch to give it a little variety. Does the sketch seem to know how werewolves work? No, not at all. But maybe in Thompson’s world, that is how they work.

While this episode is certainly weird — both in terms of sketches and in the sense that it can’t quite decide whether it wants to go full tilt as a Halloween episode or not — no other sketch quite hits the sweet spot of dark humor that “Tasty Toaster Tarts” does. In fact, this sketch might just feature Chance’s best performance, as his general cheery disposition is amazingly twisted into a more sinister situation as this sketch progresses. This is the only sketch that really stretches Chance’s abilities in any way.

This is one of those sketches where lack of coordination ends up being the complete joke, and honestly, that actually makes for a better sketch than one would think. So in this case, it makes sense why Chance breaks, and the same goes for Cecily Strong, Ego Nwodim, and Heidi Gardner. It’s broad, it’s goofy, it’s honestly dumb — but those are all points in its favor.

“Spooky Song” is another onetime sketch-turned-recurring sketch, as this first showed up in Jim Carrey’s episode back in Season 40. This actually seems more like an attempt to redo that sketch with a lot less effort in terms of both production and comedy. It’s also one of the few definitively Halloween sketches in this episode. Somehow, the live audience loses their mind for this sketch, which essentially boils down to “death by butt stuff.” The sketch is funny enough for what it is, but it’s not as funny as the live audience seems to think it is, which really makes the whole viewing experience far more surreal than it needs to be.

But the actual MVP for this sketch is the skeleton playing the piano.

Usually, this type of Kate McKinnon/Aidy Bryant sketch is an easy highlight of an episode. In fact, their performances are still a highlight, especially when they start singing a choral version of “Pump Up the Jam.” It’s just that parts with the guys (Chance the Rapper, Pete Davidson, and Chris Redd) are really bad. Sure, they’re playing teenage boys, which is supposed to work in the sketch’s favor — but they’re not just bad in character, the material itself doesn’t actually work.

As everyone in the cast gets at least one thing to do in this episode, this isn’t really one where any one person takes over completely. But Cecily Strong gets to have two really strong performances in her bit as a Trump supporter and then her starring part in “Love at First Sight.”

If there’s one sketch that truly captures this particular episode of “SNL” and Chance’s second time hosting, it’s “Space Mistakes,” the sketch about “another film about the damages of space.” It doesn’t achieve the figurative heights of the “Grouch” fake trailer, but it’s a charming sketch as it is. (The best joke in the sketch isn’t even the trailer itself but the line to “see it in IMAX or on a plane. Nothing in between.”)

His status as a musical guest was never in question.

Going back to the cold open, Alec Baldwin’s Trump is still lazy and unfunny, which is only highlighted more when he’s surrounded by actual characters. Cecily Strong comes in hot as one of the Trump supporters, and she would be the best part of the sketch, if not for Aidy Bryant’s later character, who wraps her bit up with, “Well, the Earth is flat and Beyonce is white!” Darrell Hammond’s Bill Clinton has been stuck on the same joke for the past 20-plus years, and Fred Armisen as the president of Turkey is… Fred Armisen as the president of Turkey. The actual cast is great here, as are the extras who have the robotic cult bit down.

Also, if every “SNL” episode this season wants to find a way for Alex Moffat to awkwardly dab, then have at it.

Funnily enough, it was Chance’s first episode as a host where it was extremely apparent that Alex’s Eric Trump was a major breakout character for him. Now, two years later, the bit between him and Mikey Day’s Donald Trump Jr. is still funny and it still definitely kills for the live audience, but there’s really not anywhere else to go with it. As this administration has led to “SNL” proving with pretty much every sketch centered on it: There’s really not anywhere else to go with any of it. Which is why it’s somewhat disappointing that these two are the only featured characters on this week’s Weekend Update, even though they always deliver.

Especially as this is the Weekend Update where Michael Che has enough time to squeeze in a transphobic joke at Kanye West and Caitlyn Jenner’s expense, two people who could be easily mocked for plenty of other reasons. Things are just teetering over the edge when Che comments that Kanye’s choices make it seem like he’s transforming into an old white woman named Kathy, but it works.

Then he deadnames Caitlyn Jenner and the audience goes dead silent for his “Calabasas” punchline. Even without this bit, Michael Che’s jokes on Weekend Update have always elicited more groans than actual laughs from the audience. And he always calls that fact out live, with him even counting two jokes in a row that happened to this week. Unfortunately, that’s just how it’s going to be until he finally decides to leaves “SNL,” as it’s already been too long to expect anything to change on his or the show’s end.