For the second week in a row, “Saturday Night Live” had the task of working with — and trying to figure out how to use — a first-time host. Here are the highlights. 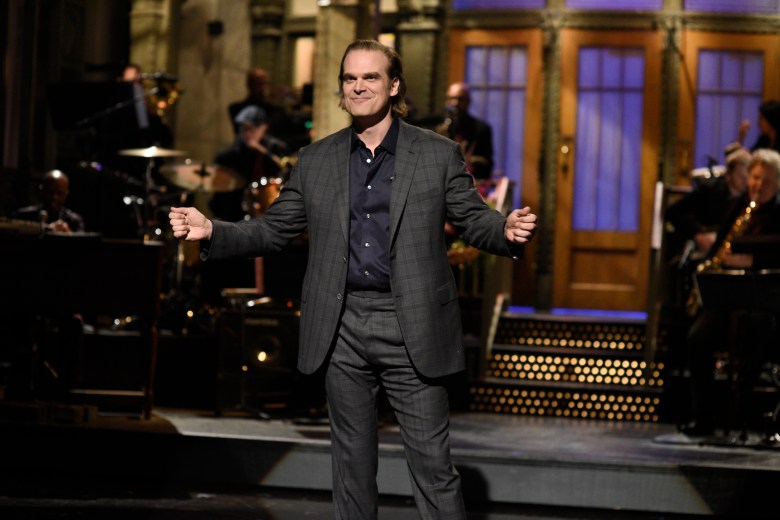 For the second week in a row, “Saturday Night Live” had the task of working with — and trying to figure out how to use — a first-time host. Last week, it was Phoebe Waller-Bridge (“Fleabag”), and this week, it’s David Harbour (“Stranger Things”), which means the war between Amazon and Netflix rages on. Or something like that.

As far as a first-time host like David Harbour goes, his opening monologue could’ve gone a number of ways. “SNL” could’ve brought back the old “audience” Q&A (with a cameo from any of his “Stranger Things” castmates) or gone back to the old crutch of the musical monologue or even just done the simple “‘SNL’ cast members show up and interrupt” bit. Instead, they went with the most obvious one in hindsight, the “SNL” studio tour turned Upside Down.

The top three bits of the monologue from best to worst: the Upside Down being where Pete Davidson has really been this entire time (and not all that committed to actually turning up on the show, which rings true to life and this actual episode); Harbour calling Aidy Bryant “Barb”; and Kenan Thompson being the one truly in charge of “SNL,” not Lorne Michaels (because Thompson shouldn’t be the one to fall on the sword for all of the bad decisions and sketches that have been made on Michaels’ actual watch).

The first sketch of the night, “Little Miss Teacher’s Friend” (discussed below) sets the tone of the episode, specifically in the form of the type of characters Harbour would end up playing: any weirdo the “SNL” writers want him to inhabit. “Principal” Weirdo, “Grouch” Weirdo, “Coked-Out” SoulCycle-ist Weirdo, “Horny Italian” Grandma Weirdo, and “Folk Singer” Weirdo. Which is actually impressive, considering Harbour’s career broke out as a relatable and likable (if gruff) police chief in “Stranger Things;” and before that, he also played one of the two likable characters on “The Newsroom.” But it would be a lie to say he doesn’t pull these weirdos off, because he does.

“SoulCycle” specifically is a sketch that works both because of its showcase of weirdos (Harbour, the sketch-stealing Bowen Yang, Heidi Gardner, and Kate McKinnon) and the reactions of the “straight men” (who are also weirdos — Ego Nwodim and Alex Moffat). Nwodim’s early “Oh, pass” to Moffat’s obvious attempt at flirtation isn’t just one put down; it sets the vibe for their whole dynamic in the sketch, but Yang’s instructor introduction (“My name is Flint, like the water,” a truly dark joke) really starts the sketch off hot. And then it somehow gets hotter when he starts giving out Mark Wahlberg energy, talking about how he would’ve saved Abe Lincoln if he’d been there.

The only thing that hurts it, however, is the weak ending, as Harbour’s line about both his and Cecily Strong’s characters being fired because she looked through his bag is bad. It’s a bad line, a bad line to end on, and a bad line reading (with Harbour looking right into the camera/at the cue cards). But that doesn’t negate his work in the rest of the sketch, in which he actually keeps up with the cast members in terms of laughs and jokes. The fact that he’s also the most physically imposing person in the sketch also adds to the bit.

This one’s a no-brainer. In fact, this fake movie trailer is an actual masterpiece, even before the orchestral arrangement of the “Sesame Street” theme song kicks in. Seriously, this is on another level. So, thank you, “Joker.” Thank you for existing, so this sketch can exist.

There’s no better way to describe “Little Miss Teacher’s Friend” than this: This sketch has major Nasim Pedrad vibes. It also has major “Girlfriends Talk Show” vibes, two things that are greatly missing from “SNL.”

It’s honestly bizarre to see that Ego Nwodim is carving a niche for herself as more of the straight man (but still a little off-kilter) in sketches — or at least as someone with a surprising wildness, like in last week’s “Mid-Day News” — as anyone familiar with her comedy outside of “SNL” knows, she’s one to always come in hot, with big characters. But it works. As does everything about this sketch, which sets the weirdo tone and serves as a reminder that adults as little kids remains a very funny bit. As are horse girls who are afraid to ride a horse.

Alright, more than that, this sketch feels very old school, in that its joke came from the idea of a physically imposing man in drag (and overly sexual) being hysterical. In the same episode that opened with Billy Porter and a hat tip to actual, celebrated drag. Really, that’s just poor timing — this isn’t even saying there’s an issue with the sketch on a larger level. It just really feels like a sketch felt like something out of the ‘90s or ‘00s (or before) in terms of how uninspired it was.

But hey, David Harbour got to do another accent.

Ah, the return of a “Worst Sketch” that isn’t bad at all, just not as good as others. The problem with this sketch is simple: Kyle Mooney literally just did a better father-son sketch with Woody Harrelson. Variety is the spice of life, and while a SquareSpace podcast joke will always be funny, this sketch falls flat.

And last but not least, this sketch was kind of just ill-advised, as well as something that wouldn’t have felt out of place on “The Amanda Show,” if not for the existence of Judge Trudy. (“Bring in the dancing puppies,” they would say.) Dogs doing people things is always funny — especially if it’s a Tim Allen grunt, apparently — as are dogs being so camera-shy they try to jump out of Cecily Strong’s arms. (And she somehow doesn’t break, getting all of her lines out in the process.) But as funny as it is, it’s also kid sketch show funny. And less of a 10-to-1 sketch than the first sketch of the night.

This was a Kate McKinnon episode and thankfully not in the usual way. McKinnon gets featured plenty, as the de facto lead female cast member of “SNL,” but that’s also come with a lot of resting on her laurels come impression time. This episode actually allows McKinnon to do some different things. (It’s very much a blessing that this sketch was cut for time.) Sure, there’s Elizabeth Warren, but there’s also her roles in “SoulCycle” and “Little Miss Teacher’s Friend.” And she and Aidy Bryant, of course, always shine as a duo, which is a large factor of “Peter, Paula & Murray” (a very good musical sketch that gets lost in the second half of the show shuffle).

Let your freak flag fly. For the second week in a row, the host is easily one of the top performers of the episode. That’s a good thing and no knock against the established cast — there is a difference between a celebrity host getting attention for their work and a celebrity guest stealing the spotlight from actual cast members. But Bowen Yang is definitely coming for this crown.

This week’s “Saturday Night Live” was off to a good start from the moment it actually featured the real Billy Porter, whose enthusiasm and general awesomeness extended to the sketch itself. There is a liveliness to this cold open that the Trump (and Trump-adjacent) sketches lack, as there’s more to this opening sketch than just people hitting their marks and then reciting a line that either quotes a thing the famous person appearing has been in or making a reference to how Trump says China weird and how Pence calls his wife “mother” and how Rudy Giuliani is a reptile man or whatever Kate McKinnon is going for in those moments.

The moment you realize “SNL” is going to do its take on the real Elizabeth Warren mic drop moment, it’s a matter of seeing how they’re actually going to pull off improving on it. And they do, with Warren turning it into a stand-up set — but really a drag, in multiple ways, performance — with a Sasha Velour wig removal to top it all off. That’s a hot start.

Also, the cold open responded to “SNL’s” latest criticism from the premiere without responding, by casting Lin-Manuel Miranda as Julián Castro. (Colin Jost is still Mayor Pete, but now that is a joke all on its own.)

This week’s Weekend Update is not as good as last week’s (Che’s bit about whether we can actually make fun of Trump was better than every Alec Baldwin Trump bit combined), but it does have the very good return of Heidi Gardner’s featured character, Bailey Gismert. Heidi Gardner is just so good, in general, but the combination of her thinking Leslie Jones is Michael Che’s wife and falling for the Joker (and thinking she can fix him) is brilliant. As is her calling Pennywise “a dusty-ass clown.” Because, well, he is.

Less successful is, sadly, Pete Davidson’s return to the Update Desk. After two weeks away in the Upside Down known as James Gunn’s Suicide Squad movie, Davidson returns looking really rough (which he himself acknowledges in joke form) and barely puts any effort whatsoever into the STD topic.

The latter can often be the case for him, but he doesn’t even seem to care enough to go off-topic about something he actually does care about. He makes another “Joker” joke — because “SNL” apparently learned about “Ray Donovan” and “Joker” at the same time — in response to Colin Jost’s jab about him on Weekend Update last week. Yet Colin Jost’s joke was funnier.