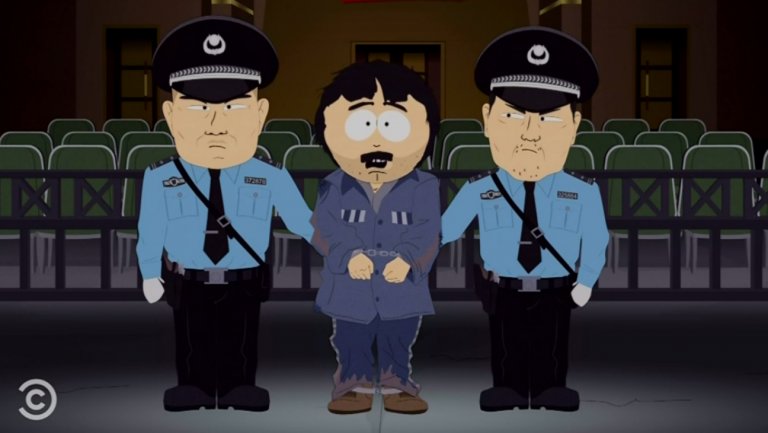 The most recent episode of the Comedy Central animated series “South Park” has been scrubbed from the internet in China because of its critique of the relationship between Hollywood and the Chinese government. The episode, “Band in China,” aired October 2 in the U.S and was the second episode of the show’s 23rd season. “South Park” is not officially released in China, but pirated versions of new episodes have long circulated online.

“Band in China” featured two storylines that were highly critical of China. One narrative followed a Hollywood producer trying to make a biopic about Stan’s metal band. The group members are told not to mention the Dalai Lama, homosexuality, or Winnie the Pooh so that the movie can make more money by appealing to Chinese audiences and not being censored or banned by the Chinese government. “We live in a time when the only movies that us American kids go see are the ones that are approved by China,” Stan says during the episode.

The other storyline follows Stan’s dad Randy as he travels to China to make money off his weed business. While boarding a plane to China, Randy sees NBA players, Marvel superheroes, Google executives, and Disney princesses all flying with him. The episode’s sharpest critique of China takes place when Randy is caught with weed and sent to a Chinese labor camp. “South Park” depicts the miserable working conditions of the camp, and in one moment Winnie the Pooh is spotted as a prisoner. China has often censored “Winnie the Pooh” in the past because some people compare Chinese president Xi Jinping to the character.

A report from InkStone News mentions that by October 7 all reviews for “South Park’s” 23 seasons have been scrapped from popular Chinese movie review website Douban. Searching for “South Park” in both English and Chinese on the popular social media website Weibo yielded no results, while online community forum Baidu Tieba suspended the “South Park” page. The website page now reads: “According to the relevant law and regulation, this section is temporarily not open.” Links to “South Park” clips, episodes, and some full seasons have been removed from the streaming service Youku. Lastly, a WeChat page that specialized in “South Park” wrote in an October 5 post that it would stop posting links to the show’s new episodes.

This Article is related to: Film and tagged China, South Park