Linda Hamilton is more of a badass than ever, but this painfully generic action movie proves that the "Terminator" franchise is obsolete. 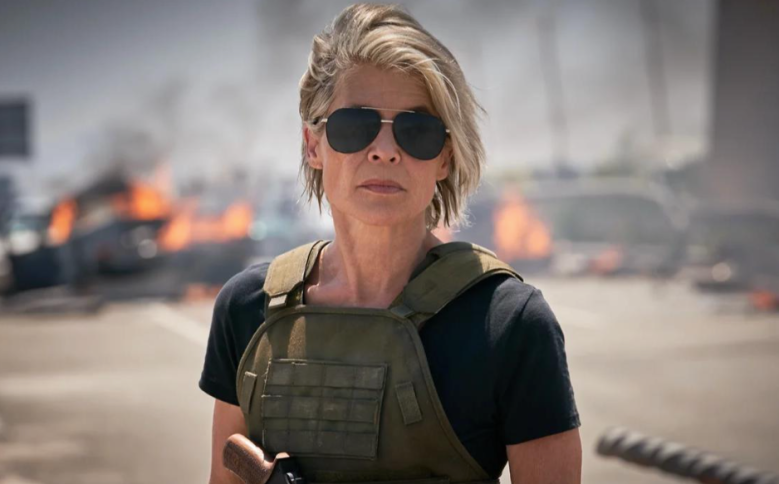 Despite being the sixth installment of a franchise that hasn’t really been relevant since the collapse of the Soviet Union, Tim Miller’s competent but coma-inducing “Terminator: Dark Fate” has no reason to feel this far past its expiration date. In a studio age of intellectual property where nostalgia and innovation are tugging us so hard in either direction that it doesn’t seem to matter what happens right here, nothing this side of a “live-action” Disney remake could possibly be more “now” than an unsolicited $150 million sequel in which the present is literally reduced to a turf war between the past and the future.

And “Dark Fate” does everything in its power to embrace the 2019 of it all; from its self-congratulatory emphasis on strong female characters and (far more graceful) focus on people of color, to its pandering fan service and soul-numbing parade of weightless special effects, this isn’t just another mega-budget “requel” that nobody asked for, it’s all of them. Perversely, however, the ways in which “Dark Fate” is such a slog du jour only help to underline why the “Terminator” series has always felt so timeless; in a saga about how people never learn and never give up, it’s fitting that the latest chapter should be such an undeniable testament to both of those truths. If this movie is a minor improvement over the unwatchable installments that inspired James Cameron to come back and retcon his baby a measure of redemption, that’s because it recognizes that we always have to save the future for ourselves.

When Cameron stepped away from his “Terminator” franchise after the massive success of its second installment, it seemed as though crisis had been averted. “Terminator 2: Judgment Day” ended with Sarah Connor (Linda Hamilton) and her beefy robot friend (Arnold Schwarzenegger) defeating the robot that was sent back through time in order to kill her prepubescent son John, a kid destined to grow up and lead the human resistance in a cataclysmic war against the machines. Not only was the boy still alive, but Cameron even suggested that Sarah’s efforts might have canceled the apocalypse altogether; free will had won a tentative victory over fatalism, and the promise of a bleak tomorrow resolved as the most urgent reason for people to fight towards a brighter today.

And then the gleefully nihilistic “Terminator 3: Rise of the Machines” incinerated that idea with a metal smile on its face, as John Connor learned the hard way that the inevitable can be delayed but not derailed. As it goes in life, so it goes on screen — these days, neither Connor’s victory nor Cameron’s absence was ever going to stop a Hollywood studio from dismantling this story for spare parts and turning the “Terminator” saga into a perpetual seesaw between foolishness and resilience. The foolishness to develop genocidal A.I. technology, and the resilience to fight it; the foolishness to keep making “Terminator” movies, and the resilience to… keep making “Terminator” movies.

“Dark Fate” might close the door on the “Terminator” franchise, but every dull frame of it suggests that we’ll be trapped in that vicious back-and-forth ’til kingdom come. The good news is that you can forget about everything that’s happened since the summer of 1991. Not only has Cameron returned to produce, he’s proclaimed that all of the sequels made while he was gone weren’t canon. And so this story picks up where “T2” left off, with Sarah and John trying to enjoy their time together before another Terminator shows up to blow them apart. And that’s exactly what happens in the opening scene, as Sarah drops her guard just long enough for a robot to unload a shotgun into her son (it sounds horrifying, but you’ll be too dazzled by the flawless de-aging FX to care about the carnage).

Cut to: Mexico City circa 2020, where an augmented cyborg assassin named Grace (a shredded and intractably human Mackenzie Davis) drops in from the future. Her mission is to protect unsuspecting factory worker Dani Ramos (Natalia Reyes, in a helpless bystander of a performance that struggles to become anything more when it counts). It’s a task that becomes a lot more complicated when a Rev-9 murder robot shows up in order to stop her.

A shape-shifter whose human camouflage hides a malleable pool of liquid metal ooze, the Rev-9 is essentially an unstoppable cross between the T-1000 and the evil aliens from “Edge of Tomorrow.” The Rev-9 is equipped with a few nifty innovations, but — like most tech — it boasts much less personality than its predecessors (steel-jawed Gabriel Luna plays the robot’s default flesh disguise, and he’s every bit as forgettable as Robert Patrick’s “T2” villain was iconic). 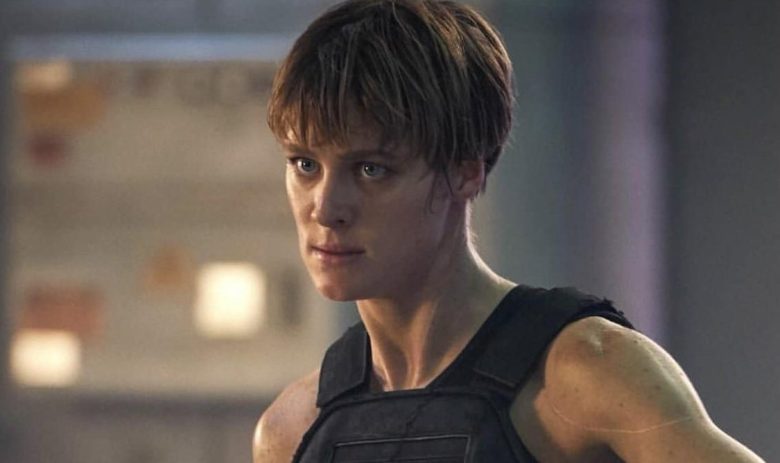 It doesn’t help that the Rev-9’s upgrades pave the way for some of the movie’s biggest problems. An indestructible death robot capable of impersonating a member of the LAPD is scary and layered with sociopolitical context; a computer-generated parkour ninja who can violate the laws of physics in a way that sucks the life out of Miller’s hard-to-follow action sequences… is not (for what it’s worth, the Rev-9 does eventually pass itself off as a Mexican-American border guard, but “Dark Fate” has no interest in mining any part of that for deeper meaning). It’s easy to appreciate the scale of the extensive chase setpiece that ends the first act, but the messy staging of Miller’s digital mishegoss will have you pining for the practical magic of the truck crash in “Rise of the Machines.”

When the smoke clears, 63-year-old Linda Hamilton is standing next to the rubble with a rocket-launcher on her shoulder, and it sure is great to see her. The gravitas and investment equity that she brings to the screen is palpable, even if it’s wasted on obvious plot beats and ersatz Cameron machismo (“I hunt Terminators and I drink until I pass out” is a fun line of dialogue in a movie with precious few of them). Now a badass crackpot who eludes robots by keeping her cell phone in a bag of potato chips, Sarah has been trapped in a nightmare for too long to be woke — she’s been too busy killing Terminators to see “The Force Awakens” or “Wonder Woman” — and so she naturally assumes that Dani must be a target because she’ll one day give birth to a very important man.

The thing is, you have seen those movies. And Miller, who got this gig by directing the insistently self-aware “Deadpool,” has to know that you have seen those movies. And yet, “Dark Fate” arrives at Dani’s obvious, actual value with an almost Promethean sense of pride, as if making the character a Mexican woman were enough to excuse the fact that nationality and gender are her two definable attributes. It’s neat and appreciably political to pin the future of humanity on an anonymous factory worker who America would turn away at the border, but Dani’s only purpose is to lead the action back to Arnold, who takes control of the movie once he shows up.

The details of Schwarzenegger’s role are all deep in spoiler territory, but suffice it to say that he and Hamilton are still great foils for each other. His part is smartly written, funny in a way “Dark Fate” struggles to be without him, and perhaps the most fundamentally human character the franchise has ever seen. The more casual scenes between he and the rest of the cast are strong and textured enough that — if only for a moment or so — you might even stop asking yourself why the machines don’t just send two killer robots to take care of Dani.

Alas, that downtime is followed by scene after scene of generic action, only some of which is actually meant to look weightless. Davis has a few Gogo Yubari-inspired moves that make you wish Cameron had been in the director’s chair to make the most of these characters, but there are only so many times you can watch a robot get shot, heal itself, and keep walking before you start praying for Skynet to kill us all, and “Dark Fate” hits that number in its first 30 minutes. It’s nice (and perhaps unavoidable) that the “Terminator” franchise has finally reached back into the past to remind us that tomorrow is always up for grabs — that the future belongs to anyone willing to fight for it. When the present is this dull, however, it can be hard to remember what anyone is supposed to be fighting for.