Essentially a 90-minute episode of "Planet Earth" that's aimed at children, this unfocused but emotional doc succeeds where Disney failed. 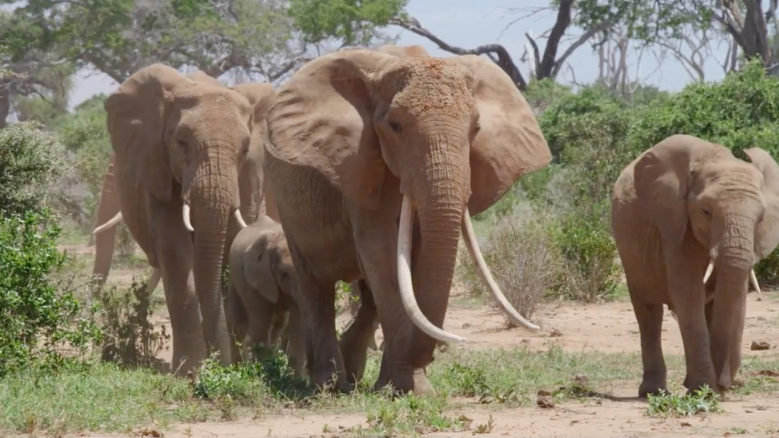 Mark Deeble and Victoria Stone’s “The Elephant Queen” might be easiest to enjoy if you think of it as a necessary corrective to the recent “live-action” remake of “The Lion King.” Whereas Disney’s hollow digital cash grab offered a soulless simulacrum of the African continent’s animal kingdom — one that somehow felt anthropomorphized and utterly alien in equal measure — this kid-friendly nature doc takes the opposite approach, cutting four years of stunning vérité footage into a cute story about the circle of life.

Its best moments (e.g. pachyderms stopping to pay respect to the dead, a bullfrog trying not to get squashed during the daily rush for water) reveal a rich spectrum of natural expression that embarrasses the limits of photo-real animation, and make it seem as though Disney was insulting life itself by even trying to recreate it out of code. While horizon-expanding shows like “Planet Earth” have made this degree of access and precision feel somewhat de rigueur, Deeble and Stone’s documentary stands out for its narrow focus and incredible tenacity.

The movie sticks with the same herd for long enough that young viewers can appreciate their plight, grow connected to these “characters,” and even see their own families reflected in the way these elephants interact. And vice-versa. Nature is inherently unsentimental, but the most powerful moments of “The Elephant Queen” are moving for how they reverse the flow of anthropomorphization — for how they trace human emotions back to animal behavior.

Alas, so much of “The Elephant Queen” does it the other way around, as the script that Deeble has written for narrator Chiwetel Ejiofor to read in his cheeriest voice is a hot mess of cheesy hokum that struggles to put kid gloves on the horrors of survival. After an overwrought intro (“Oh wise and gentle soul,” Ejiofor intones, “do you remember when we had it all?”), the uneven story begins with Athena, a giant “tusker” in Kenya’s Tsavo region who acts as the matriarch for her entire community; the setting is one of many crucial details that is never mentioned onscreen, as Deeble and Stone haphazardly try to align us with the animal POV by limiting our context to what the elephants might know of their world.

We meet Athena’s daughter, Princess, and a toddler named Wewe who’s desperate to be friends with her. There’s also Mimi, a newborn, whose arrival during a biblical thunderstorm is edited to look as if she’s summoning all the animals of “The Kingdom” to the watering hole the next day. That’s where we meet a clumsy Egyptian goose named Zazu (wait, sorry, Stephen), an adorable little bullfrog who’s just trying to mind his own business, and a host of other creatures whose lives revolve around an elephant-driven ecosystem. The cuter beasties get the lion’s share of the attention, as Ejiofor coos over the sight of birds learning how to fly for the better part of 10 minutes. One brilliant sequence, in which “The Ride of the Valkyries” plays over the soundtrack as a dung beetle flies after a fresh mound of poop, is the exception that proves the rule.

For the most part, however, the shapeless first act is as light and candy-like as the aftermath of a bullfrog orgy (Ejiofor refers to the foamy embryonic mess as a “meringue” for the predatory fish who like to snack on it). You can feel Deeble and Stone laboring to make you fall in love with these creatures — the elephants in particular — across the film’s meandering first half, as countless hours of extraordinary camerawork are pared down to the most endearing shots. Recognizing that people need to care about endangered species before they can be moved to save them, the co-directors play up the cute stuff however they can. Emotion is the bonding agent here, and “The Elephant Queen” will do anything to earn it.

That well-intentioned approach doesn’t always make for the most exciting of documentaries, as the narrative artifice required to hold everything together is too obvious in a world where “The Lion King” has already taken this to its logical extreme. But when Deeble and Stone step back and let nature take its course, the results can be overpowering. Athena is used to migrating when the dry season arrives, but “The Elephant Queen” catches her in a generational drought that threatens the survival of every animal she knows.

The annual trek to “The Refuge” is fraught with even more peril than usual; Athena doesn’t know that climate change is the culprit, and so the filmmakers don’t bother to fill in the cataclysmic why of it all (a nearly fatal knock against a glorified piece of edutainment). Nevertheless, she’s forced to reckon with the consequences all the same, and the sequence in which one of the young elephants dies from starvation is absolutely devastating; to watch Athena’s herd stop to rub their tasks along that broken little body in the dirt is to recognize that saving another species is tantamount to saving ourselves. For all of the film’s strange omissions, and its struggles to thread the needle between appealing to children and trying to show them how wild our world really is, this passionate and beautifully shot film is worth celebrating for how clearly it conveys the raw truth of that idea.

“The Elephant Queen” is now in theaters. It will be available to stream on Apple TV+ on November 1.

This Article is related to: Film, Reviews and tagged Apple TV+, Reviews, The Elephant Queen, The Lion King