Fine work from the former "Friends" star — plus Mimi Leder's lively direction — aren't reason enough to wake up for this star-studded dud. 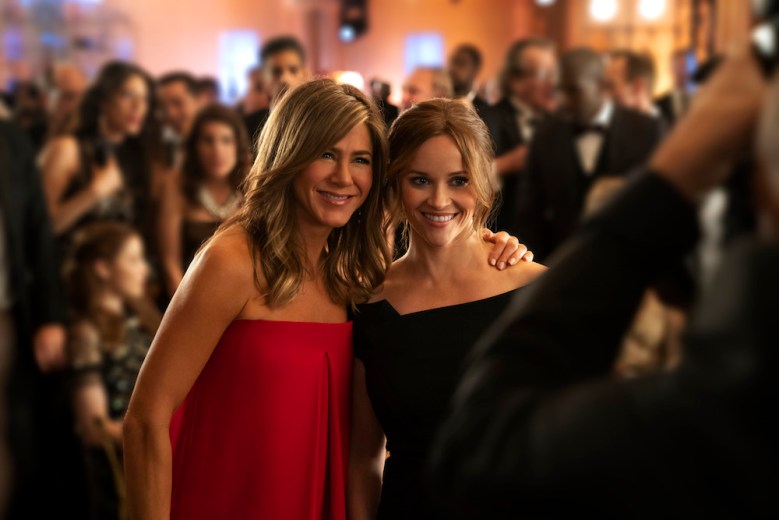 Jennifer Aniston and Reese Witherspoon in “The Morning Show”

Watching “The Morning Show” is a bit like watching “The Big Short,” except nothing is said straight-to-camera and nearly everything is boring. Adam McKay’s Oscar-winning 2015 film was so worried about its complicated, term-heavy plot that it gussied up every other aspect of the production; there’s a cheeky voiceover, a star-studded ensemble, and even diegetic celebrity explainers, like Margot Robbie breaking down subprime mortgages from a bathtub. All this was in service of a dire message: unchecked bad behavior will repeat itself, even on a global scale.

Apple’s first drama — from an amalgamation of writers and producers including creator Jay Carson, showrunner Kerry Ehrin, and writer/executive producer Michael Ellenberg — has the opposite problem: It trusts its story without knowing what it’s trying to say. All the pretty people in the world can’t keep you hooked when the purpose is this muddled, and hoo boy, is it hard to figure out what “The Morning Show” wants to accomplish, or even who we’re meant to care about.

But hey, it looks beautiful. Credit to director Mimi Leder for bringing her empathetic eye and expansive vision to the first two episodes, finding moving moments with each character and pushing the pace whenever possible. And yet, opportunities should be far more plentiful. “The Morning Show” starts with a crisis: A New York Times story is about to break exposing an internal network investigation into Mitch Kessler (Steve Carell), the award-winning co-host of The Morning Show. (Yes, the show-within-the-show has the same name as the show itself.) Multiple staffers have accused Mitch of sexual misconduct, and the network fires him before the story can break.

Through a series of early a.m. phone calls (which highlights the real stars of Apple TV+ — the iPhones), key members of the Morning Show staff hear the grave news. Executive producer Chip Black (Mark Duplass) gets the first call, as he’s laying in darkness on the control room floor. Next up is Alex Levy (Jennifer Aniston), Mitch’s co-host on The Morning Show who was never told of an internal investigation and gets blindsided by the abrupt dismissal of her longtime partner. Mitch himself isn’t shown until Alex shares the news with the world at the start of that day’s episode, but don’t worry: His story doesn’t end there.

Meanwhile, somewhere deep in the south, Bradley Jackson (Reese Witherspoon) hears the news over the radio and doesn’t really give a shit. “One less idiot to peddle soft news to the masses,” she tells her cameraman. Little does she know, that through a series of fortunate and unlikely coincidences, she’s destined to take over his job. 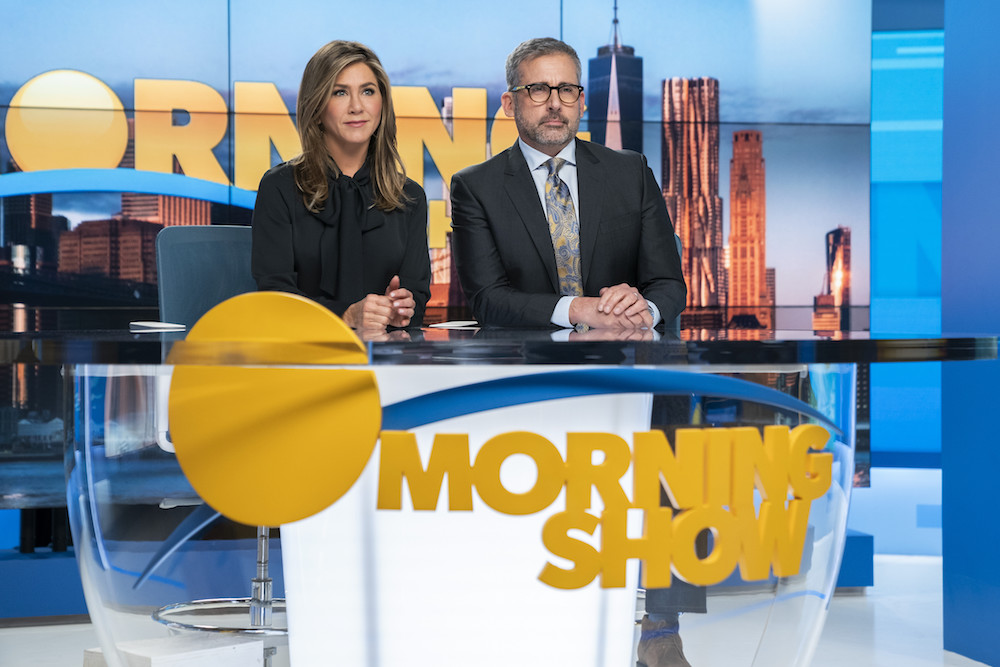 Jennifer Aniston and Steve Carell in “The Morning Show”

These are the pieces that, more or less, had to be put into play. The primary draw of “The Morning Show” is seeing Aniston and Witherspoon as co-hosts, cohorts, and maybe even friends. Seeing them do just about anything, together, had to be Apple’s rationale for spending a reported $150 million per season, but stars do not a TV show make — a fact that becomes clearer with each episode, as fleeting speeches about the state of TV news and the hypocrisy of the #MeToo scandal fail to coalesce into a meaningful story.

Aniston carries the most weight with her long-trademarked casual star quality. Her effortless luminosity — of an everywoman who couldn’t help but become a big fucking deal — fits the role so perfectly, she could’ve coasted on it, but there’s an engaging conviction to her performance, as well; a ferocity that’s always simmering and sometimes explodes. She might be lashing out at Mitch for abandoning her, or she might be struggling to put her purse together before hitting the red carpet. But she’s angry, often when the world around her won’t allow her to be angry, and Aniston finds quiet moments to instill fear and sorrow into Alex’s crowded headspace.

Being infused with brimming rage serves as a clever juxtaposition of America’s favorite daughter — the onscreen Alex and offscreen Alex are one-in-the-same, yet easy to discern — while Witherspoon’s Bradley Jackson is all-too-obvious. The “Big Little Lies” star is handicapped by a rough introduction (where she screams at an ill-informed coal protester), but more so by an over-defined character. Bradley speaks with a soft Southern lilt because she’s from the South, and because she’s from the South, she’s got to be a conservative reporter, and because she’s a conservative reporter, she cares about the farmers and the factory workers and the hard-working Americans that big-city folk forget about, but don’t assume she’s biased or uncaring because, well, you get the point. 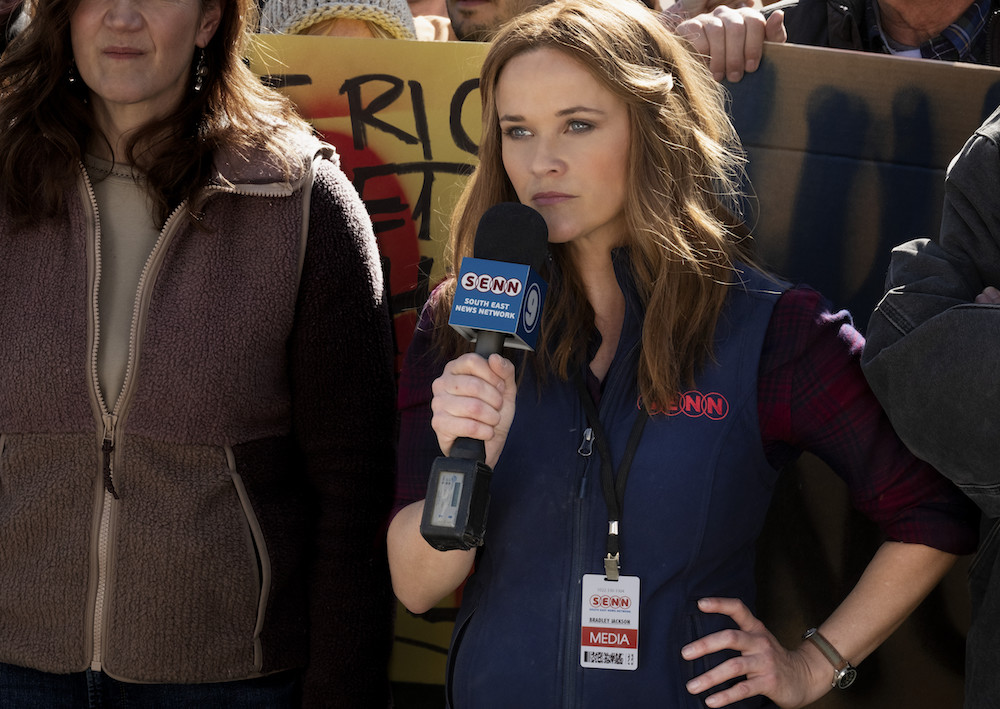 Reese Witherspoon in “The Morning Show”

Bradley explains herself over and over — she’s a Southern conservative, an unbiased old school journalist, and a vocal feminist — but each explanation is only there because she doesn’t fit the story being told. Alex and Bradley are an odd couple united by happenstance and self-preservation. Alex represents the old school New York media and Bradley is the rural reporter turned anti-establishment interloper. But if they’re going to overcome their differences and forge a new morning for the Morning Show, wouldn’t it make more sense for Bradley to be played by an up-and-coming millennial? Shouldn’t a notably younger person than Alex (and perhaps a person of color) embody a brand new perspective being added to the team, rather than another middle-aged white woman?

That the five top-billed actors are all white emphasizes blind spots like this one, where inclusivity could have helped tell a more effective story, but it doesn’t explain the show’s most exasperating choice: to sympathize with men accused of sexual misconduct. Through two episodes, it’s honestly hard to justify any scene with Mitch Kessler at all — maybe, maybe seeing Alex confront him is important, so she can move on from Mitch, but watching him break down in tears after struggling to make coffee is, at best, confusing. Are we supposed to laugh at this privileged rich dude’s ineptitude? Are we supposed to feel sorry for him? More often that not, it seems like the latter, and even after the third episode steers Mitch’s story toward the edification of an ignorant predator blinded by power, it doesn’t give us any reason to care about a guy who, at best, cheated on his wife all the time and, at worst, raped women. (That he’s a very clear Matt Lauer stand-in invites the audience to see him in the worst light, even as Mitch adamantly claims he’s not a rapist.)

With time, “The Morning Show” could make its message clear. It could define its characters in ways that makes their struggles more accessible. It could set new stakes that don’t pivot on a few very, very well-off individuals finding new, high-paying jobs. Given that the whole show changed after Apple ordered two seasons, early tonal inconsistencies can be expected, but they still make these first three episodes hard to gauge and, worse still, there’s very little to just enjoy. Maybe it doesn’t make sense to compare an ongoing TV series about morning news to a two-hour film about the financial crisis. But if that can be entertaining and incisive, than this should be, well, either.

“The Morning Show” premieres its first three episodes Friday, November 1 on Apple TV+. New episodes will then be released weekly. Season 2 has already been ordered.

This Article is related to: Television and tagged Apple TV Plus, Jennifer Aniston, Reese Witherspoon, The Morning Show, TV Reviews