Even with her biggest subject yet (Mr. Rogers) and a star to match (Tom Hanks), Heller told IndieWire why she stayed true to what's worked for her. 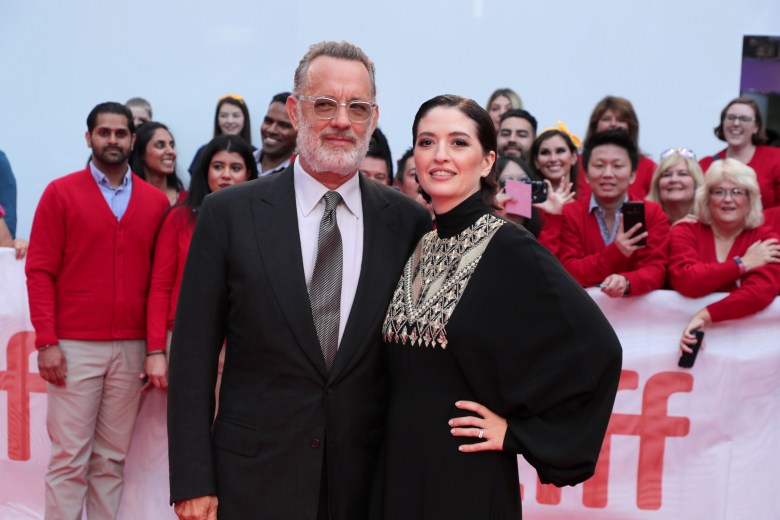 Three films into her feature career, Marielle Heller has carved out a particular niche: movies about real people and their messy lives. From last year’s “Can You Ever Forgive Me?” to her latest effort — the feel-good “A Beautiful Day in the Neighborhood” — the filmmaker excels at avoiding the trappings of staid old biographical dramas. And yet, her work always has a gentle emotional pull. “Beautiful Day,” which features Tom Hanks as beloved television host Fred Rogers, tells a story about kindness and being comfortable with yourself that doesn’t easily slot into the biopic sub-genre. It’s also not really a biopic about Fred Rogers, no matter how many stories characterized that way early on.

“I don’t know why that ever got started as a thing,” Heller said in a recent interview with IndieWire. “There’s nothing about it that is a biopic.”

It’s a familiar semantic battle for Heller, who has previously directed a pair of films that drew upon true stories: 2015’s Sundance breakout “The Diary of a Teenage Girl,” which she adapted from Phoebe Gloeckner’s “semi-autobiographical” graphic novel, and the 2018 followup “Can You Ever Forgive Me?,” which starred Melissa McCarthy as real-life literary forger Lee Israel. With “Can You Ever Forgive Me?,” Heller said, “Everybody called that a biopic, too, and I had to say, it’s not a biopic, it’s not a biopic, but this one is even less so.”

Based on Micah Fitzerman-Blue and Noah Harpster’s Black List screenplay — originally known as “You Are My Friend,” which was in turn inspired by Tom Junot’s 1998 Esquire article titled “Can You Say…Hero?” — Heller’s film follows Matthew Rhys as Junot surrogate Lloyd Vogel, a rabble-rousing reporter who has made his bones digging for dirt (and finding it) on any number of subjects, suddenly forced to write what sounds like a softball piece about the TV host. In the midst of a personal and professional crisis, Lloyd works overtime to sort out if Rogers is really the wonderful, generous figure everyone assumes he is.

Turns out, he’s less successful at figuring out Rogers’ hangups than in addressing his own.

Initially framed in whimsical terms as an imaginary episode of the seminal TV series “Mister Rogers’ Neighborhood,” the film opens with Hanks’ Mr. Rogers narrating and navigating Lloyd’s story before the pair even meet. By the time the duo are face to face, essentially interrogating each other, it’s Lloyd’s own issues that are dug up, his own neuroses that are battled back, all thanks to a man who has long excelled at getting to the heart of the matter. It’s not a movie about Mr. Rogers, but about his impact on the world around him, relegated to a microcosmic level. 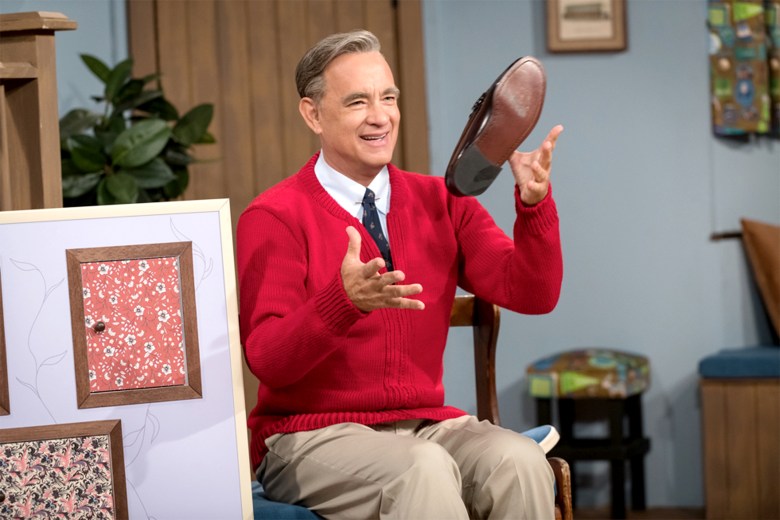 “Mr. Rogers would not make a good protagonist of a narrative film,” Heller said. “He’s without conflict, he’s too far along on his journey toward enlightenment to be a good protagonist. Our protagonists have to be struggling with demons in a certain way. You want to make movies about extraordinary people, but those extraordinary people have to have a huge journey. Everything that I’ve learned and known about Mr. Rogers is, he was himself, and he always was. He was a pretty wonderful person, always.”

Hanks himself was initially uninterested in taking on the role, despite continued interest from the film’s creators. “Obviously, when I signed on to the project, the producers and writers all said, ‘well, our dream casting was always Tom Hanks,'” Heller said. “But then I had to spend some time really thinking in my head, ‘do I feel like Tom Hanks is exactly the right person for this role? How does the public already feels about him, how does that help or hurt our mission of making this movie?'”

The filmmaker said she and Hanks had long wanted to work together, but it wasn’t immediately clear that Hanks — who was reticent to play yet another real person after roles in fact-based films like “Captain Phillips,” “Sully,” and “The Post” — would acquiesce. He had already passed on the project three times at the script stage, long before Heller was attached. She assured him she would be taking an unorthodox approach.

“I was sure that he was one of the only actors in the whole world, if not the only actor, whose public persona could line this up well with Mr. Rogers and that it would work,” she said. “I approached him with my vision for the project and how it is not a biopic and why I think it’s a movie that we need right now.” He signed on soon after.

Having star power like Hanks behind Heller’s most high-profile film to date immediately added more heft to the project. And while it also continued to muddy the biopic waters — Tom Hanks is the star, the thinking went, so it must be about his Fred Rogers! — Heller is eager for audiences to get hip to the film’s real star: Rhys’ troubled, searching Lloyd Vogel.

“This is my kind of protagonist!,” Heller said. “Somebody who’s really struggling with their own cynicism and sense of self and who they want to be in the world and feeling the pain, much closer to the pain of being a human and really in the midst of that and in turmoil who has far way to go on his emotional evolution.” 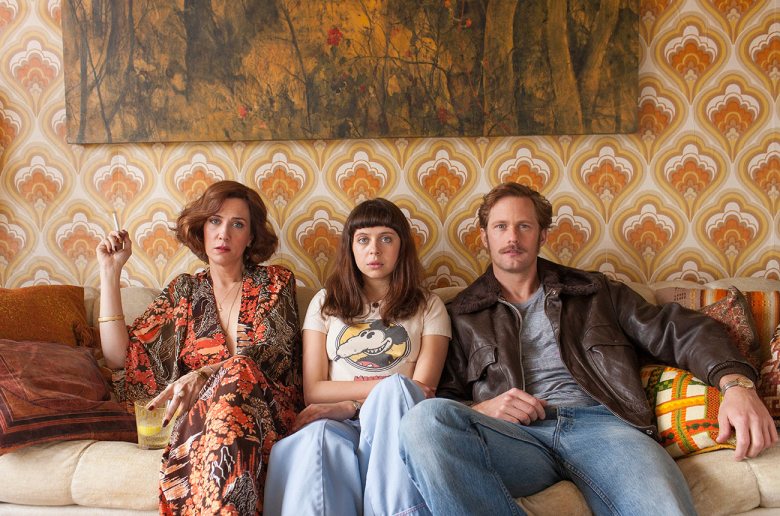 Heller’s previous two films have chronicled complicated women during fraught times — in “The Diary of a Teenage Girl,” Bel Powley’s teenage Minnie Goetze is mired in a queasy affair with her mother’s boyfriend, while “Can You Ever Forgive Me?” finds Lee Israel on a career downswing that leads to insane criminal consequences — but “Beautiful Day” offered her the chance to turn her eye on a male protagonist in need of his own reckoning.

“I think there’s something really beautiful about a male protagonist [whose] goal at the end of the movie is not to be some big hero who saves the day, but the goal is to be a more emotionally evolved person and a better father and husband,” she said. “We don’t really have movies often where that’s the end goal for a male protagonist.”

Fitzerman-Blue and Harpster’s script initially appeared on the Black List in 2013, and in the six years between that appearance and finally hitting theaters, Fred Rogers’ legacy enjoyed quite a renaissance. Last year, Morgan Neville’s lauded documentary “Won’t You Be My Neighbor?” was a smash hit at the box office, and picked up a slew of accolades, including the Indie Spirit Award for Best Documentary Feature. People needed Mr. Rogers.

“With all of the bad things that are happening in the world right now, I think we need a message of togetherness and true unity,” she said. “I believe that starts with personal reflection and then we can find kindness toward each other. … The writers said something to me, ‘we’ve been trying to get this movie made for 10 years, but maybe we really needed it to happen now. Maybe it’s happening exactly when it was meant to happen.'”

Heller said she signed on to make the movie before realizing that Mr. Rogers “was going to have such a moment in the zeitgeist,” and was instead taken in by her own personal connection the material and the man at its heart. Heller said she watched “Mister Rogers’ Neighborhood” from such a young age that it’s “almost pre-conscious memory” for her. Now, she’s raising her own kid on his messages. The widespread affection that greeted Neville’s film only made her feel more excited about her feature, and more clear on what it needed to be.

“After the documentary, we wouldn’t need a biopic and I wouldn’t have made a biopic, there’s no interest for me,” Heller said. “The two movies would make a great double feature, because the documentary does such a gorgeous job of filling in the life of Fred Rogers and telling you so much about him and putting his show and the legacy that he created in context. It probably added to the expectations and the sense of responsibility to realize that this was something where everybody feels so excited and compelled.” 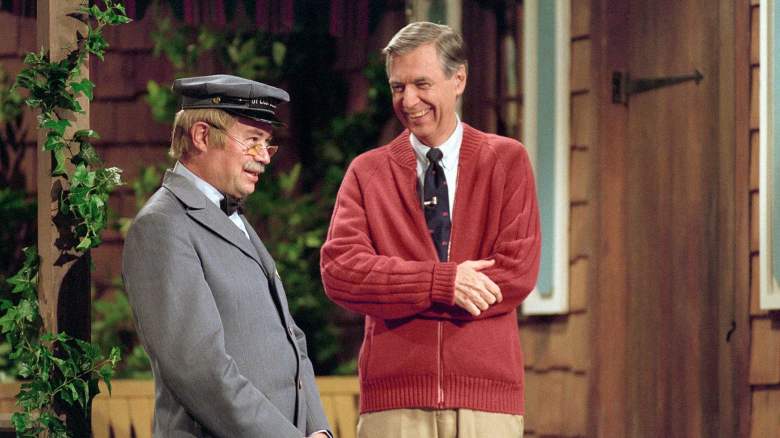 Early audiences have reacted strongly to the film, which premiered at the Toronto International Film Festival and left multiple fans awash in tears. It’s the first Heller film that could be classified as a tearjerker, and that’s about as close as she’s willing to get to the old biopic tropes.

“I think that outpouring of emotion is the opposite of cynicism,” the filmmaker said. “It’s allowing yourself access to your deeper emotion. That’s what Mr. Rogers tried to do for kids watching his show. The messaging we give to young boys who then grow into men is that they should not have access to those emotions, and I think we do a disservice to everybody when we don’t allow a huge portion of our population to access their feelings. If this movie is helping men to reconnect and to let go of that cynicism and to connect to their own hearts, I think it is healing.”

For Heller, her goal in filmmaking is always to make her audience feel good about what they’ve experienced. It’s a message Fred Rogers would have loved.

“I want them to feel like they’ve reconnected to their humanity in some way and found themselves feeling understood or seen through the movie,” she said. “I don’t want to make art that makes you feel more alienated or worse about the world when you leave the theater. I have thought of this movie the whole time as an episode of ‘Mr. Rogers’ for adults, that hopefully this movie can do something that’s obviously deeper and more complex because it is for adults, but that is the equivalent for adults that his show was for kids.”

And at least one other adult as already benefitted from the message and design of “A Beautiful Day in the Neighborhood.”

“Reconnecting with Mr. Rogers as an adult, [now] I feel weirdly connected and comforted by him in terms of myself,” Heller said. “I’m a very sensitive person, I always have been, and I often think I’m not really cut out for Hollywood. Something about Mr. Rogers has done the thing for me that he tried to do for kids, and for everyone on his show, and working on this project has made me feel like I’m okay the way I am. Working on this movie has let me be a little more honest about the way I really am.”

Sony Pictures Releasing will release “A Beautiful Day in the Neighborhood” in theaters on Friday, November 22.

This Article is related to: Awards and tagged A Beautiful Day in the Neighborhood, Consider This, Interviews, Marielle Heller