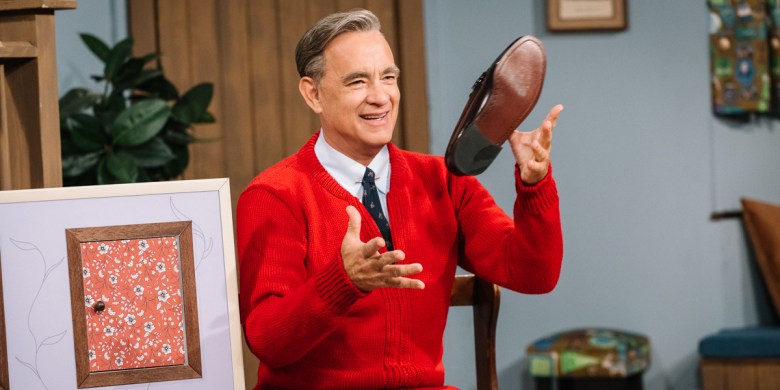 Production designer Jade Healy is a master of playing with space to contrast the differences between characters and their environments. In “Marriage Story,” she explored the painful divorce between Scarlett Johansson’s Nicole and Adam Driver’s Charlie by accentuating full and empty spaces in New York and LA. But, with “A Beautiful Day in the Neighborhood,” she had a more ambitious task: recapturing the sweet, whimsical world of Fred Rogers’ (Tom Hanks) beloved kids show, “Mr. Rogers’ Neighborhood,” for an unexpected encounter with cynical New York journalist, Lloyd Vogel (Matthew Rhys).

In the interest of accuracy, they shot in Pittsburgh, where Rogers worked and resided. But director Marielle Heller made it easier by using the empty space that was once the Fred Rogers Studio at WQED. In keeping with the show, though, both the “Neighborhood” and “Neighborhood of Make-Believe” sets needed to be built on the same stage. Everything was hand-made from scratch, just as it was originally, with the joy of rough imperfection, down to the same textures, fabrics, patterns, and colors. The art department recreated everything as the familiar backdrop for Rogers’ benevolent life lessons and random acts of kindness, from the quaint living room to the cuddly hand-puppets and their make-believe town with the castle and trolley.

“We wanted it to stay in the realm of [Rogers’] reality,” Healy said. “We had so many resources and Pittsburgh opened their arms to us.” She made use of the Fred Rogers Center for essential props and archival photographs, relying on actual crew members from the show and Rogers’ widow, Joanne, for advice. Yet since the movie takes place in ’98, wear and tear needed to be evident. “They would definitely update the sets with coats of paint but they were worn,” she added. And the puppets, which they made from scratch as well, were also worn.”

The process was reverse-engineered, particularly for Daniel the tiger and the other puppets. The puppet fabricator first made them look new and then past their prime to retain the proper texture and layering. “What was interesting was that [Rogers’ world] was two-dimensional,” Healy said. “He wanted the kids to see the reality of the ins and the outs of his space. And his show never changed throughout the years. They didn’t try to update it, except for curtains and the frame painting. It had this very inviting, homey quality to it. Sometimes he would go off the sets and you’d see the side areas. He never tried to hide anything or trick kids, that was very important. So we tried to maintain that.”

And, in the spirit of not hiding anything, the set also included the behind-the-scenes shooting of “Mr. Rogers’ Neighborhood” with the actual Ikegami camera (shipped from London). “When you think about it, it’s not just the set plus the [TV] crew: it’s then our movie crew as well,” said Healy. “So it was really hard to think about fitting it all in. And, in the beginning, there were many conversations about being able to shoot in such a small space. We looked at the possibility of shooting on a bigger stage, and, at the end of the day, it just felt right to fit it in there and make it work. It was cramped but that was part of the reality.”

The miniatures were a further level of production design within the realm of the show, created by a separate unit overseen by Healy. “We always wanted to convey the child-like wonder, so it was an interesting process for us to get it right, trying to match something to a world that exists,” she added. “It was a dance to get them feel like part of the world.”

“A Beautiful Day in the Neighborhood” with Matthew Rhys.

Additionally, though, the miniatures extended beyond the world of Mr. Rogers in overlapping with Pittsburgh and New York, culminating with a moment when the troubled journalist gets lost in the Neighborhood. This posed one of the biggest challenges in terms of design and scale. “I started with Pittsburgh conceptually because I knew that we wanted to expand from Fred’s miniature world to our bigger Pittsburgh world,” Healy said “I found a vantage point that I liked in Pittsburgh, and that Marielle liked. I started conceptualizing what that would look like and getting that child-like wonder and playing with scale and color.

“It was patterned after Mr. Rogers’ miniatures, which are off in scale and color. Streets are too wide, cars are too big.  We adopted that. So often what I would do is exaggerate things, particularly color in New York. Pittsburgh was easier — it was very colorful with yellow bridges. With New York, the detail was so great but often I had to go back and go over the details and make it less detailed. It was almost too real and I would have them add colors that didn’t make sense like more green or yellow or blue.”

“A Beautiful Day in the Neighborhood” with production designer Jade Healy.

Script revisions necessitated changes to the miniatures as well, including a few key additions. “As we found our locations, Marielle added a miniature here for the exterior of a house or for the cemetery,” added Healy. “We photographed it and figured out how to miniaturize the location where we were actually shooting. We all transported ourselves back to a time when Fred was around. By the end of the movie, many in our crew would start singing the song, ‘It’s Good to Talk: ‘It’s good to talk, it’s good to say the way we feel.’

“This mantra was so comforting…we were bringing these characters back to life and telling their stories, and we wanted to make Fred proud of what we were doing.”

This Article is related to: Awards and tagged A Beautiful Day in the Neighborhood, Best Production Design, Marielle Heller, Tom Hanks, Top of the Line