The production relied on lightsabers that weighed less than normal to pull off the epic, rain-soaked lightsaber battle. 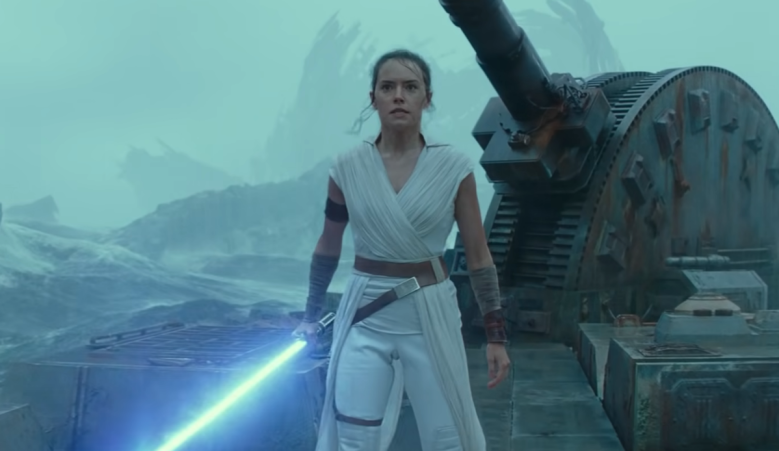 The trailers for “Star Wars: The Rise of Skywalker” suggest the trilogy-long confrontation between Rey (Daisy Ridley) and Kylo Ren (Adam Driver) will reach its climax during a one-on-one, rain-soaked lightsaber battle atop a crashed space vehicle in the middle of an ocean. The fight looks like it will be the most intense lightsaber duel of the new trilogy, and that’s exactly how Ridley describes filming it. In a new interview with Marie Claire, Ridley reveals the climactic lightsaber battle took nearly a full week to film and was easily the most arduous days of the seven-month long “Rise of Skywalker” shoot.

Marie Claire writer Chloe Malle reports: “A six-day-long shoot of a fight scene between Rey and Kylo Ren (Adam Driver), teased in the trailer, was the most demanding week of the seven-month shoot, admits Ridley. Water cannons blasted at them in chilly November U.K. weather, and Ridley relied on daily banana and peanut butter sandwiches and the fact that the lightsabers weighed less this time around. ‘If they had been heavier, I don’t think we would have been able to do it,’ she says. ‘It’s just really epic.'”

While the filming of the lightsaber battle was an arduous endeavor, Ridley said the making of “The Rise of Skywalker” as a whole was the best time she’s ever had on a “Star Wars” set. “It’s a big film for everyone,” the actress told Marie Claire. “I did all of the emotions: I did frowns, I did smiles, it was the sort of biggest breadth, and I think that’s also why I had such a good time, because I got to do so much shit — like, physically, emotionally — and I got to work with so many people.”

Ridley got her acting breakout when she was cast as Rey for “Star Wars: The Force Awakens.” In between filming sequels “The Last Jedi” and “The Rise of Skywalker,” the actress has gone on to appear in “Murder on the Orient Express” and the revisionist Shakespeare indie “Ophelia.” Doug Liman’s long-delayed “Chaos Walking,” in which Ridley stars opposite Tom Holland, is set for release in 2020. “The Rise of Skywalker,” Ridley’s final “Star Wars” movie, opens nationwide December 20 from Disney.

This Article is related to: Film and tagged Adam Driver, Daisy Ridley, Star Wars: The Rise of Skywalker