From her new Gimlet podcast "Motherhacker" to audiobooks and motion-capture work, here's how Coon has built her voice into a powerful instrument. 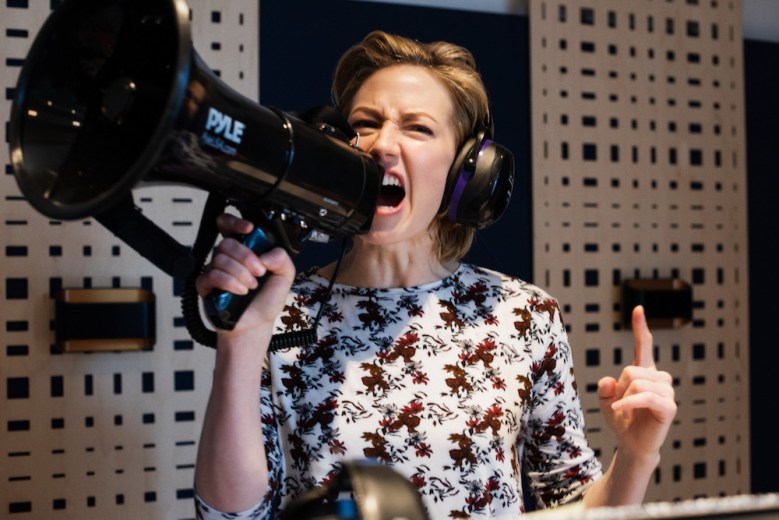 Carrie Coon in the recording studio for “Motherhacker”

When Carrie Coon signed on to star in the scripted podcast “Motherhacker,” she didn’t know exactly what would happen next. She’d taped podcasts before, but her interests skewed toward nonfiction and political series — now, she was the lead of a Gimlet original series, and while that came with its own challenges, Coon also came down with a nasty case of strep throat right before recording.

“There was very little preparation,” Coon said in an interview with IndieWire. “I had the script. I had the dates. I have a toddler, so I did not have time to prepare — that’s just not part of my life right now, preparation. I was really just thinking, ‘OK, I’m going to go in the studio for six hours, we’re going to record these scripts straight through, and knock them out in three days.’ It just sounded very straightforward.”

Well, it wasn’t. “Motherhacker” presented creative demands both technical and emotional, from using cell phones, megaphones, and even her own Apple Watch inside the booth, to making her solo dialogue sessions sound as natural as when she had scene partners with her in the room.

“I’m also in every scene more or less, so it was just a really challenging exercise in endurance,” she said, not to mention the strep throat she couldn’t shake during those three days of intense vocal work. “It’s only your voice, as you pointed out, so you only have as much range as your voice allows you to have. You have to be really focused.”

Focus has never been a problem for Coon. The way she’s able to talk about her craft — at one point, she casually described improving her own performance by assessing how many “operative words” she hits in each line — reveals an actor deeply invested in the specifics of building a character, scene by scene, word by word. Her dedication to the art of acting is part of why she’s in demand. Coon recently wrapped production on “Ghostbusters 2020” and soon will be back on the Steppenwolf stage in Tracy Letts’ “Bug,” which marks the first time her husband’s play will grace the legendary Chicago stage. (Coon says she’s “pretty intimidated” by it, but she’s “finally getting excited” for the January debut.)

Before you see her in theaters, make sure to hear her in the new podcast. It’s a whole other form of performance, and Coon tackles each challenge with such precision and understanding, it’s no wonder the difficult work sounds effortless. Looking back on her “grueling” but “liberating” time on “Motherhacker,” as well as the rest of her history in voice acting, Coon shared useful tips for her fellow thespians, insights for audiophiles, and valuable stories for anyone who spends a lot of time with podcasts — scripted or otherwise.

“Motherhacker” follows Bridget (Coon), a smooth-talking assistant high school principal whose life savings is stolen with one convincing phone call. But Bridget needs that money to support her two kids — not to mention her ex-husband who’s still in rehab — so she goes after the identity thieves herself, sliding into the dangerous world of the dark web to try to rescue her family.

“They were doing some very interesting technical things,” Coon said. “It’s kind of an exploration of technology and how it’s impacting our lives and creating threats where there never used to be threats, and also distance, but also perhaps connection.”

Coon said the recording process followed those themes, too, choosing to use props whenever possible instead of after-effects or filters. She used her Apple Watch to record a scene where Bridget speaks into her own watch. She used a megaphone in-studio for another scene, and for most of the scenes where characters are talking on the phone, she was doing the same.

“So Pedro Pascal [who plays Bridget’s ex-husband] came in, and he was in another booth — because we wouldn’t have seen each other because [his character] was in rehab,” she said. “It was really interesting to do that scene with Pedro over the phone, which makes it feel more like the circumstances of the piece, you know? With Lucas Hedges [who plays a computer-savvy high school student] we recorded with him in the booth with me because [our characters] were at school together. The [producers] tried to mimic the characters’ relationships.” 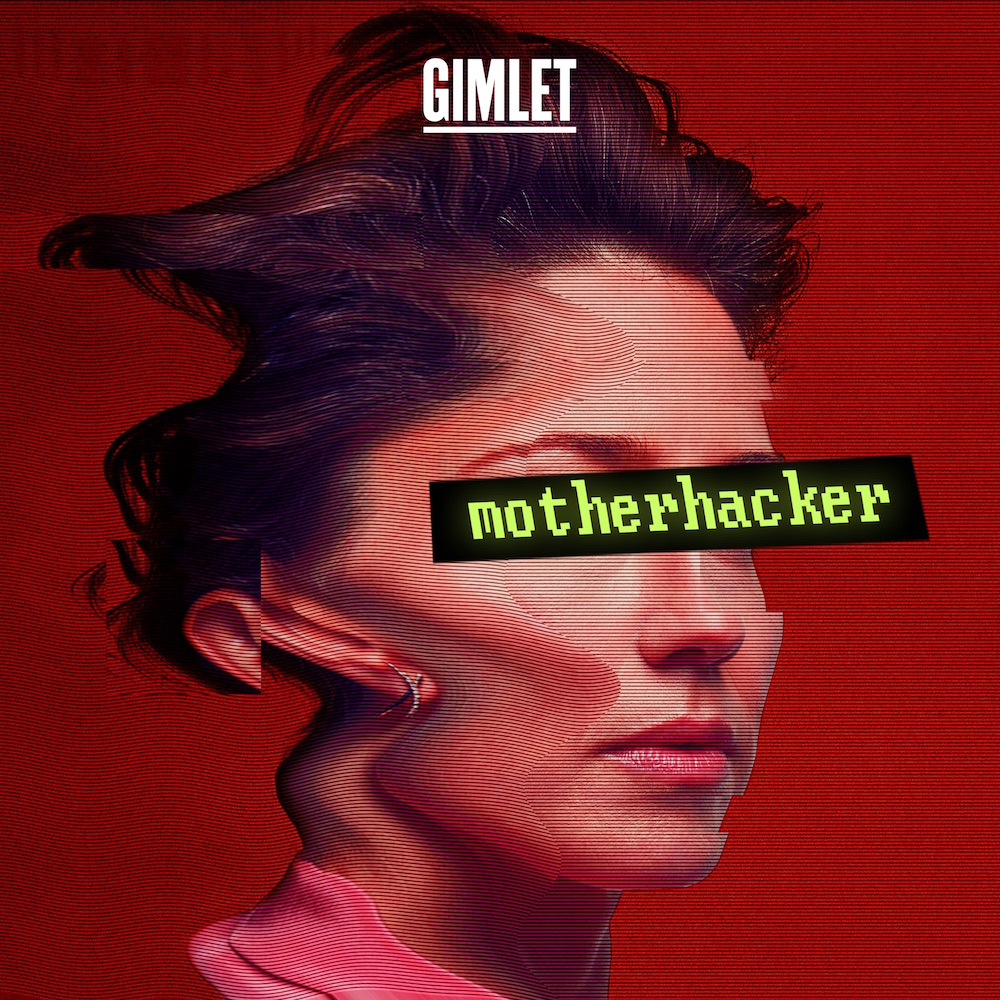 The Pros and Cons of Acting Alone

Still, recording with a partner wasn’t the norm. Unlike with film and television, Coon didn’t have a co-star to react to or rehearse with, relying heavily on director Amanda Lipitz for feedback.

“It felt very technical,” she said. “My job as an actor, and particularly when you’re in the theater, [is to know] whether or not you’re holding the audience’s attention. It’s different in a recording booth. You don’t really have that immediate feedback, aside from the directors and producers. You’re not getting that kinetic feedback [from an audience] in the room.”

That’s where Coon fell back on her training. Without a scene partner to worry about bothering, she could repeat lines as often as she needed, whenever she needed, in order to get at the emotional heart of the line. She made sure not to fall into a speaking rhythm, which is easy to do during marathon recording sessions, but reads as inauthentic when listeners are trying to imagine Bridget in a new setting or new circumstances.

“You also can’t get to in your head,” Coon said. “You can’t get too technical because you have to be available. The reason some of us are actors is because we maybe have an instinct for human behavior. And so you also don’t want to limit your choices to just technical ones. You also have to try to stay available.”

Don’t Fake It — Make It Real

One tip Coon had came from her ADR work in movies and TV. Automated Dialogue Replacement is a standard process where actors come in after shooting their scenes to re-record certain lines, sounds, or scenes.

“Sometimes you have to do embarrassing things like breathe heavily or make sex sounds or whatever it is they’re missing,” Coon said. “[But] when you’re standing still behind a microphone, it’s very hard to generate that body memory. I would encourage actors in those rooms to use their bodies as much as they can, even if they have to walk away from microphone and come back. For example, if you’re in a heightened situation and you’re supposed to be afraid, but you’re just standing in a recording booth, do some push-ups. Get your heart rate up. That’s something I do on set all the time.”

Coon said for another podcast, she had to record a scene where her character was “really laboring,” and instead of miming the struggle or doing push-ups, she picked up the table in the recording booth and held it over her head while saying her lines.

“Faking that stuff is not fun or interesting, and it usually doesn’t sound authentic,” Coon said. “The goal as an actress is to make it all feel authentic and real and present — it won’t always. You’ll never be 100 percent present, but the goal is to try to be there as much as you can be, and listeners always know. You don’t have to be an actor to know when an actor is being truthful.” 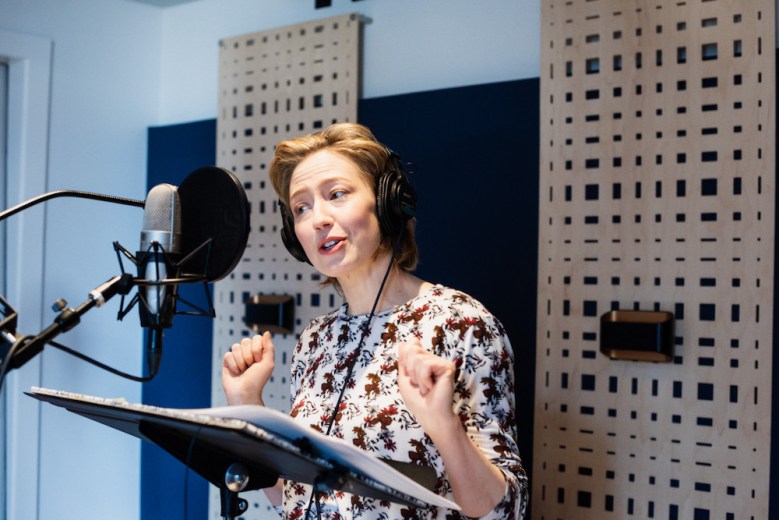 Carrie Coon in the recording studio for “Motherhacker”

When It’s Just a Voice, Actors Can Play Anyone — And Any Actor Can Earn the Part

Coon mentioned (a few times) how nice it was not to worry about hair and makeup, just one of the benefits of a voice acting gig. But she also appreciated how Bridget was a break from other parts.

“I was playing a harried mother, which I am right now, so if I’m going to make a foray into a podcast, it made sense to do something that was closest to me,” Coon said, laughing. “[But] it’s also a comedy, and people don’t always think of me first when comedy comes up. So it’s nice to be asked to do something with a comic bent to it.”

Voice acting, in its many forms, offers the chance to be a totally different person, too — or not a person, at all as Coon experienced with her role in “Avengers: Infinity War,” when she played the alien super-villain Proxima Midnight. Though she was on set in a motion-capture suit “throwing this foam stick and growling and grunting,” Coon was in the first trimester of her pregnancy. Without motion-capture, that might have been a problem. But not here.

In other realms of voice performance, Tom Perrotta recommended her to read his audiobook, “Mrs. Fletcher,” and Coon was able to dive in from a brand new perspective.

Coon said she felt like a director when reading “Mrs. Fletcher” for an audience — “because you’re directing the audience’s attention to what’s important, and that’s why whatever words you choose to emphasize are really critical. You can’t hit too many words or people can’t follow the shape of the story. And that was a learning curve.”

Clearly, Coon has handled the curve with command. (Her husband would be proud: Letts is currently promoting his race car film, “Ford v. Ferrari,” with Coon and their son, Haskell, in tow.) Her expert voice work is evidenced not only by the thought and execution she’s displayed so far, but in the continued roles she’s earned along the way.

“There’s more flexibility in casting because you’re not limited by your appearance,” she said. “And in Hollywood, let’s face it, there’s not always a lot of imagination. People get typecast. I’m typecast as a grieving mom cop. So to be asked to be something else is always a pleasure. The sky’s the limit if you’re willing to do that kind of vocal work.”

“Motherhacker” is available in its entirety via Spotify. Gimlet is a Spotify company.