The beloved Disney musical digs deeper into tensions between the traditional and the bold, bolstered by gorgeous animation and a handful of instant-classic new jams. 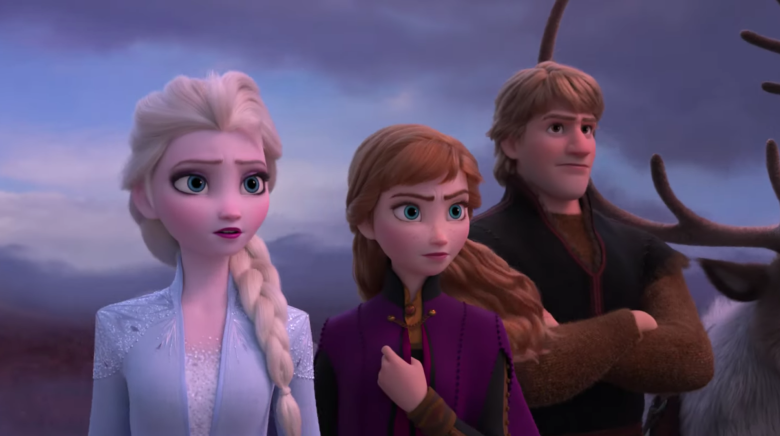 Editor’s note: This review was originally published for the theatrical release of “Frozen II.” It is now available to stream on Disney+.

Everything was in its (seeming) right place at the conclusion of Jennifer Lee and Chris Buck’s 2013 animated smash hit “Frozen,” as long-suffering princesses Anna (Kristen Bell) and Elsa (Idina Menzel) were reunited, the kingdom of Arendelle was freed from its eternal winter, Elsa was crowned queen (with her magic intact and appreciated), and Anna had found love with a doofy regular dude after banishing a nefarious smooth-talking wannabe Prince Charming type. Still, fans of the Disney feature have long clamored for a sequel to the musical charmer, if only to spend more time with a cadre of cute characters (including, of all things, a hammy reindeer and Josh Gad as a sentient snowman who has zero right to be as cute as he is) inside an inventive new world.

Perhaps they should have been careful what they wished for, if only because it’s about to be upended by a fresh new story.

Sure, Elsa eventually ascended to the throne, leaving her self-created ice castle behind and slipping into a role that had long been carved out for her, but does that choice truly reflect who she is? And while Anna has always been happy to play second (very supportive) fiddle to her gifted big sis, she’s consistently seemed like the better choice to lead a kingdom (and a Disney franchise) to new heights. Every sequel is tasked with dramatizing what happens next, but “Frozen 2” is built on a sly bit of course correction that might rile the very people who wanted it so badly. The franchise — and the fandom — are better for it.

“Frozen” may have ended with everything in its right place, but Lee and Buck’s long-awaited followup makes the case that a sequel was necessary, not because it was demanded, but because “Frozen” was never the correct end of the story. Loving the characters and themes of “Frozen” and wanting to see more of them can only naturally lead to “Frozen 2,” which does away with so many of the happily-ever-after elements of the first film (and finds new, updated ones). By moving the tension between the traditional and the bold to the forefront, “Frozen 2” is one of the more daring visions of the future of Disney moviemaking, all bolstered by gorgeous animation and a handful of instant-classic new jams.

While “Frozen” used plenty of traditional plot points to guide it, including building off a Hans Christian Andersen fairy tale, imparting key lessons about doing the right thing, and making being part of the royal family sound like a fun gig, it was always laced through with some compelling subversion. Some moviegoers even latched on to Elsa’s alienation and desire to break free from expectations as indicative of her potential queerness — possible sexuality aside, crafting a bonafide Disney Princess who really, really didn’t want to be one is still a heck of a choice for Disney. 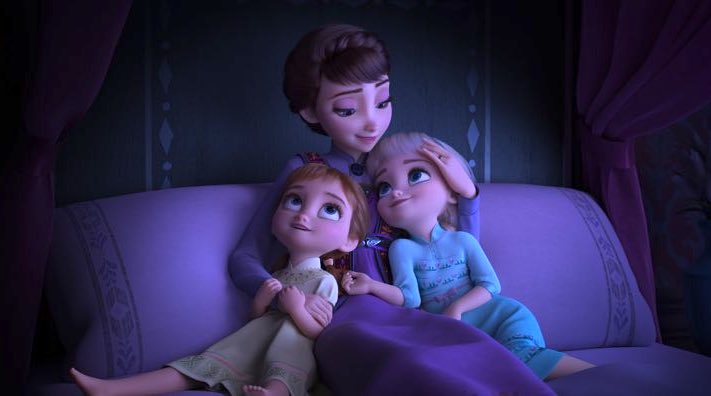 Picking up soon after the events of the first film, “Frozen 2” finds Elsa, Anna, Kristoff (Jonathan Groff), Olaf (Gad), and Sven the reindeer happily ensconced in a cheery Arendelle. And yet an early flashback to Anna and Elsa’s youth — before they were separated out of fear of Elsa’s icy powers — indicates that the seeds of this story were sown long ago. Since the first film, which offed Anna and Elsa’s parents in an off-screen shipwreck, fans have wondered about what really happened to the royal couple, another pair of loving adults lost to the whims of a studio that has always cherished the concept that parental death is key to personal growth.

“Frozen 2” gives the princesses — and the film’s audience — more time with King Runeard (Jeremy Sisto) and Queen Iduna (Evan Rachel Wood), as they share the fantastical fairy tale of an ill-fated political meeting that nearly killed the kid king, locked a distant forest and its inhabitants in a magical mist, and inspires Elsa to go looking for answers she can’t find in Arendelle. Much that’s been guessed about the super-secret plot of “Frozen 2” has turned out to be incorrect: there is no autumnal version of Elsa, no overt same-sex romance, no secretly alive parents. That’s for the best, because the surprises that “Frozen 2” unfurls are emotional, mature, and often quite dark for a kids’ film (tip: the youngest “Frozen” fans might need some warm hugs to get through a fraught final act).

As is so often the case, it starts with an unexpected journey. Early in the film, Elsa attempts to push away any thoughts about striking out into the unknown (as illuminated by a song that is, of course, titled “Into the Unknown,” one of two sturdy “Let It Go” stand-ins), and muses that everyone she loves is finally under one roof, so why would she need more? For someone as magical and secretly bent on living her own life as Elsa, you can see where the discomfort might creep in.

Anna, meanwhile, is happy as a clam, embarking on zippy signalongs with best pal Olaf (“Some Things Never Change” is just as fun and frisky as “Love Is an Open Door”) and looking forward to whatever the future might bring. Olaf, now maturing into something of an adult snowman (Was he a “snowkid” before? Best not to worry about it), is consumed by the idea that everything — including terrifying spirit-filled magical forests — will make sense when he’s older, while Kristoff just wants to put a ring on Anna’s finger.

When Elsa starts hearing an ethereal singing voice calling out to her, she’s compelled to follow it far North, and the rest of the crew can’t help but tag along, all the better to stick together and assuage Anna’s well-founded fears about losing her sister again. Of course, the journey and the voice lead straight to the distant forest, one filled with secrets and memories (many of them rendered literal by magic-conjured ice sculptures, a plot point that makes much more sense in practice). There’s also a handful of new friends to meet, all of which are welcome, many of which are underserved (Sterling K. Brown is the lone newbie who really gets to leave a mark).

Keen observers will likely see how this all is going to play out, as previously illuminated by Iduna’s flashback appearance, complete with its own song (“All Is Found”). That doesn’t stop the film’s script, from Buck, Lee, Kristen Anderson-Lopez, Robert Lopez, Marc Smith, and Allison Schroeder, from occasionally getting lost in the woods. Zipping between ruminations about the spirits that fill the forest (it’s certainly the most pagan Disney film in recent memory) to a convoluted exploration of the sins of the father (no, really) and a series of richly-animated and truly obvious revelations, “Frozen 2” is crammed with material, most of which works.

Despite the emotional upheaval of the final act, it also has a fair bit of amusement and spectacle. There’s tongue-in-cheek jibs about the Disney experience throughout, and Lee and Buck have some serious fun spinning the big musical numbers into fresh territory (Kristoff’s big song, “Lost in the Woods,” is filmed as something of a power ballad music video, more Guns n Roses than anyone could ever expect from the Mouse House, and one of the best parts of the film). Olaf is as deranged and cute as ever, moving from court jester to something of a classic fool over the course of a transformational outing. In a flashback, Anna and Elsa’s dad even makes off with a lightning fast joke about a “new Danish author.”

It all culminates in a wild, windswept mission for Elsa, one that capitalizes on her powers and pushes them to terrifying ends. The same can be said of the film’s animation, which has mostly adhered to the style of the original, all sweet faces and the occasional burst of icy action (Elsa can still make some insane snowflakes, and more), before building to an ocean-swept sequence that’s vivid, terrifying, and more eye-popping than the “Let It Go” scene in the first film. Like the film itself, it’s scary and different, but it also shows off the inherent power of moving away from expectations and embracing the drama of real life. No sequel is essential, but “Frozen 2” makes the argument that, even in the fairy tale land of Disney, they can still be important.

Disney will release “Frozen 2” in theaters on Friday, November 22.