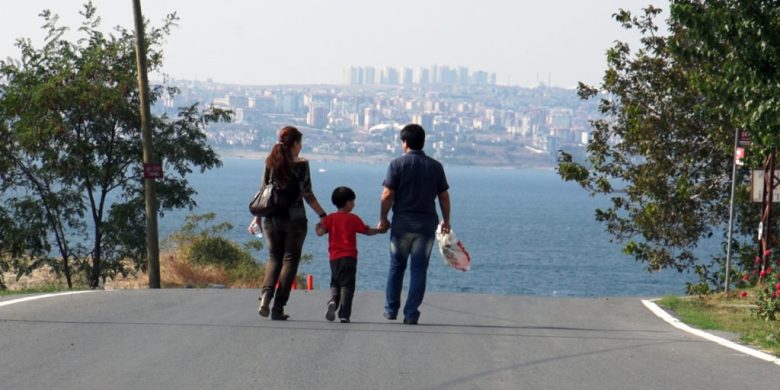 Sahand and Leila weren’t asking for much when they fled their native Iran in 2012. As Leila explains during one of many interviews during Eva Mulvad’s aching and intimate documentary “Love Child,” the couple wasn’t looking for “a good life” elsewhere; they just wanted the chance for a normal one, where their relationship and the very existence of their son Mani wasn’t a death sentence. And they were right to be afraid.

Nearly a decade ago, the couple (plus Mani) left behind everything and everyone they knew to escape to Turkey, convinced that their adulterous relationship (and the physical manifestation of it) was going to get them killed. As Sahand explains during his own interviews, he can still remember incidents during his childhood when people guilty of his same apparent crimes were stoned or hung in public, murdered by the government for their life choices. Yes, they were right to run, but were they right to believe that life elsewhere would be at all better?

Mulvad’s insightful doc picks up just as the trio are making their escape to Turkey, complete with Sahand furiously packing the few belongings he can manage, all while telling the camera that he’s “not sure if, tomorrow, I’ll be dead or alive.” Mulvad takes her time explaining Sahand and Leila’s predicament, but never skimps on the obvious urgency of their plight. Once relatively safe in Turkey, Leila takes a moment to call her mother, sobbing on the phone that she’s worried that her actions could still endanger her mom’s life. Her raw emotion, coupled with Sahand’s own palpable pain, starts the film in a place of great honesty and intimacy. It never lets up.

At its heart, “Love Child” is a story about a fractured family attempting to make their way in the world and with each other. For many years, young Mani didn’t know Sahand was his father, and as he acts out against both parents, the domestic squabbles are just as stirring as the bigger picture. As the shape of Leila and Sahand’s unlikely love story is explained (thanks, again, to the many long-form interviews that appear throughout the documentary), Mulvad excels at holding stretched out sequences; the emotion and drama of it all is staggering, and so are the stakes. Even more impressive: that the pair let Mulvad follow along with them for so long, capturing every inch of their struggles, from the baffling process by which they apply for asylum with the UN to the everyday occurrences like a trip to the beach or the purchase of a new bicycle.

At times, it feels almost too intimate, the emotions and stakes too high to just sit idly by and watch. As the weeks spread into years, the film takes on a rangy quality, and while Mulvad attempts to wrangle it through the use of intertitles to tip off the year, much of it melds into one long narrative. That may be the point, however — a cinematic representation of the limbo the family faces, moving through time without any fixed end point, only waiting for answers that might never come.

No matter the time or the place, Sahand and Leila’s bid for asylum would be fraught, confusing, and totally at the mercy of a byzantine bureaucracy. Throughout “Love Child,” the pair idly check the UN’s website for a status update on their claims — what a horrible way to learn about what will quite literally become the rest of your life! — and are unable to truly move forward until it’s resolved. Malvud’s film illuminates yet another hard truth: Their timing couldn’t have been worse. Kicking off at the beginning of the Syrian refugee crisis, Sahand and Leila must contend with an influx of other people fleeing for their lives, hoping for something normal, something just a bit better. Frustrations boil over, hearts are broken, and friends are lost. But “Love Child” soldiers on, if only because the lives it follows have to as well.

Early in the film, Sahand attempts to comfort a crying Leila, murmuring to her not to worry, because “nothing’s going to happen.” It’s an assurance based on nothing but blind hope, a sentiment that guides so much of “Love Child.” Nothing’s going to happen, but everything does in the course of seven years, and inappropriate as it may seem to chalk a family’s very real life up to cinematic twists and turns, Mulvad’s film is one of the most absorbing dramas of the year. That it’s real only makes it’s an object of further fascination, fear, and raw hope.

“Love Child” screened at the 2019 DOC NYC festival. It is currently seeking distribution.