Werner Herzog was among several cast and crew members who discussed "The Mandalorian" during Wednesday's Los Angeles premiere. 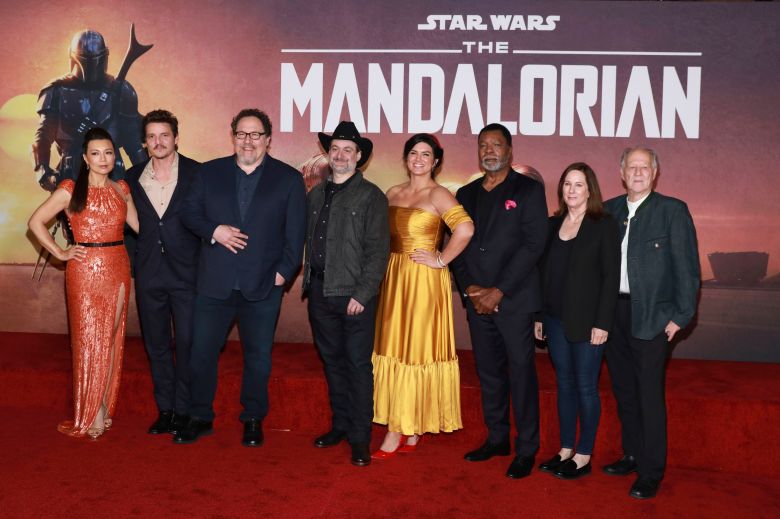 “The Mandalorian” cast and crew at the Los Angeles premiere

Werner Herzog has never watched a “Star Wars” film, but the celebrated director fit right into the mythology as a mysterious client with Imperial connections in “The Mandalorian,” the flagship launch title of the Disney+ streaming service.

Herzog was one of several cast and crew members who took part in a panel on the first “Star Wars” live action series during its premiere at the El Capitan Theatre in Los Angeles Wednesday night. Disney celebrated the evening with a Q&A before screening the show’s first three episodes.

Although Herzog revealed in previous interviews that his decision to sign on to “The Mandalorian” was primarily a financial one, the longtime director was nonetheless effusive about his time on set during Wednesday’s chat. It took less than a minute after meeting “The Mandalorian” creator Jon Favreau for Herzog to be sold on the concept, and he noted that the show’s technical aspects and production subverted common criticisms about recent big-budget projects.

“It’s cinema back at its best,” Herzog said. “In all the big fantasy films, actors were acting almost like robots in front of green screens. You didn’t see the world you were inhabiting. Now, the actors see the entire universe in which they are operating. Cinema is back to life.”

Favreau elaborated on the complicated design process of “The Mandalorian” and noted that although the show makes use of classic “Star Wars” elements such as puppets and practical effects, the show was elevated by recent breakthroughs in visual and audio design, real-time rendering and visual effects from Industrial Lights & Magic, and the Unreal video game engine.

“We use virtual reality to plan everything ahead of time,” Favrau said. “Even though a lot of what you’re seeing in front of the camera is audio-animatronics, puppetry, practical effects, mask work — all state-of-the-art, great stuff you associate with ‘Star Wars’ — there’s a lot of cutting-edge tech that goes into making it.”

Disney spared few expenses to bring a galaxy of bounty hunting and lawlessness to life on the small screen. The show’s budget was reportedly $10 million per episode and Disney is hedging its bets that the show will keep viewers hooked on the new streaming service, as Season 2 has already been confirmed.

As for Herzog, though he’s is a newcomer to the “Star Wars” galaxy, several franchise veterans lent their skills to “The Mandalorian.” Chief among them is executive producer Dave Filoni, who also directed the show’s pilot episode, and has worked on “Star Wars” projects for over a decade — including the animated series “Star Wars: The Clone Wars” and “Star Wars Rebels,” the latter of which he created.

Filoni recalled a conversation while on set with Greg Frasier, the show’s director of photography, and noted that transitioning from animation to live-action was hardly the simplest of processes.

“We were there early, it was 5:30 and the sun was coming up and Greg was like, ‘We better get started,” Filoni said. “He’s like, ‘We’re on the clock now, when the sun goes down, we’re done.’ Right. The sun. That’s going to limit what we can do today.”

“The Mandalorian” is streaming on Disney+. New episodes will be released every Friday.

This Article is related to: Television and tagged Disney Plus, The Mandalorian, Werner Herzog