As fans look for more palatable ways to stay connected to the sport, there are more opportunities than ever to get the same entertainment without actually watching the game. 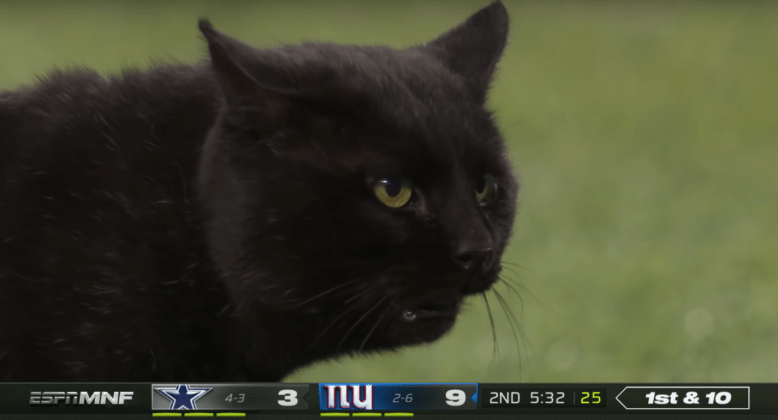 It’s hard to know exactly why football has had such a stranglehold on the public consciousness over the past few decades, but it would be a lot easier to figure out if there were always cats on the field.

Last night’s Monday Night Football game will be quickly lost to fans outside the NFC East, but what will likely live on in future years will be the fact that, with five minutes to go in the 2nd quarter of a Cowboys-Giants game, a black cat scampered on the field.

Radio announcer Kevin Harlan’s 45-second call of the action spread like wildfire through social media, and deservedly so. Harlan’s just the best. (It would be easy to pinpoint this as a career highlight for him if he wasn’t already responsible for two of the best non-sports sports moments of the last few years: narrating a streaker’s interruption of a past MNF broadcast and getting ecstatic over a free Wendy’s Frosty at an NBA playoff game earlier this year.)

Kevin Harlan's Westwood One radio call of the cat on the field is, as you might expect, an all-time great call. How much of a pro is Harlan? He worked a sponsor read into it. pic.twitter.com/3x0MVNEHNY

But beyond the added bonus of being a perfectly tailored viral clip, it’s an example of a sport going through a kind of extended reevaluation. The officials in charge of the continent’s largest sports cash cow have come under scrutiny for their handling of player issues. For many fans, it’s hard to summon the same enthusiasm for the sport, given the greater accounting of the long-term physical toll the game takes on players from grade school youth leagues all the way to decades-retired pros.

The NFL itself has consistently put its bottom-line interests ahead of individual safety, fair compensation, and its own flimsy standards for player conduct. Although California’s new law creates a framework for college athletes to earn part of the revenue they create for the NCAA as a whole, it sure seems like the fight to get equitable pay for those players will get ugly before it gets solved.

So it does feel as if we’ve reached a point where the peripheral parts of football — particularly those on TV in all its forms — have become not only the more ethically preferable ways to engage with the sport, but the more satisfying ones, too. It’s what the whole idea of the Super Bowl is built on, but the cultural fascination with all things NFL have made it possible to find year-round joy from other outlets that the game itself used to bring.

The documentary boom hasn’t quite benefited football as much as its baseball, basketball, and soccer counterparts. That may be due, in part, to the place that league mainstay NFL Films has long had in the sport’s consciousness. But the installments in ESPN’s “30 for 30” series that center on football hold their own by veering away from the self-referential mythology of the league itself and looking beyond. Sean Pamphilon and Royce Toni’s “Run Ricky Run” and Billy Corben’s “The U” are each highlights of the long-running series because of how much they consider the off-the-field lives of players under intense public scrutiny. Outside of the Worldwide Leader, Greg Whiteley’s “Last Chance U” is one of Netflix’s most consistently engaging series, looking at players at the junior college level and the pressures they face among themselves.

Even theoretical football seems like it’s outdistanced the live product on the field. SB Nation’s Jon Bois has managed to turn football into the ideal canvas for digital age existentialism, from his very funny deep dive into video game glitches in “Breaking Madden” to the sprawling multimedia fiction project “17776” to the occasional oddities of ongoing series “Chart Party.” HIs latest venture with Kofie Yeboah, “The Fumble Dimension,” returns to the world of sports video games, using simple parameters to bring about some bizarre simulated universes. Think of it as YouTube’s answer to “The Five Obstructions.”

Not only are these series engaging, they offer more insight into the way the game is played than 90 percent of actual football broadcasts. Take the latest “Fumble Dimension” episode, which creates a far better appreciation for the way football plays are called than the armchair psychologist wing of the Hot Take Industrial Complex usually manages to serve up.

And then of course, there’s always “Friday Night Lights.” The five-season marvel was a touchstone series in the growth of TV as a bingeable pastime. More and more, it seems like the Dillon Panthers came along right as a section of football fandom needed something to root for. There’s inherent drama in sports, whether in the uncertainty of nonfiction storytelling or in the lives of fictional characters like Matt Saracen and Landry Clarke. It’s safer, it’s more equitable, and the ability to craft an on-screen narrative still retains the spontaneity that drives all fandom.

Plus, if you need to, you can always add a cat.