Nicolas Cage has played every role under the sun except himself, and that's about to change with reports of a wild new project. 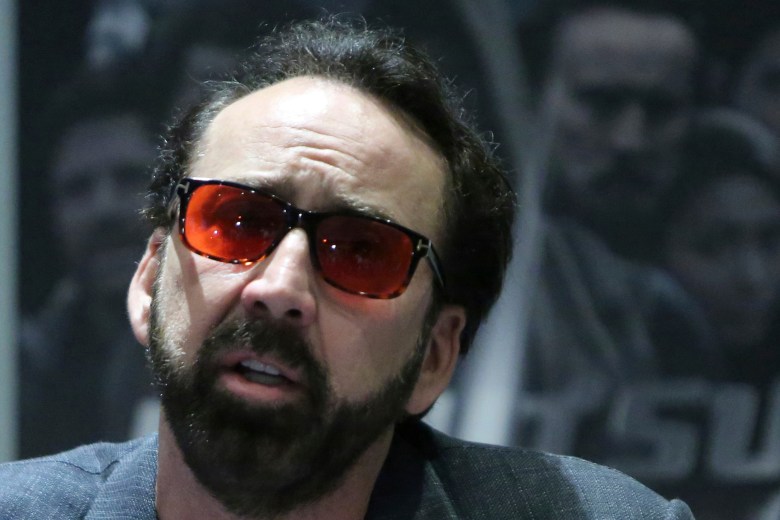 From a flaming Marvel motorcyclist antihero in “Ghost Rider” to a rock-bottom alcoholic in “Leaving Las Vegas” to Charlie Kaufman and his made-up twin in “Adaptation,” Nicolas Cage has played seemingly every role under the sun. But there’s one role he hasn’t played, and it could be his biggest one yet: himself.

According to new reports, Nicolas Cage is in final talks to play Nicolas Cage in an upcoming meta movie titled “The Unbearable Weight of Massive Talent,” which could easily double as the title of the Academy Award-winning actor’s memoir. Lionsgate is also in final negotiations to scoop up the project, allegedly beating out other high-profile bidders including HBO Max and Paramount (as first reported in The Hollywood Reporter).

The plot details so far for “The Unbearable Weight of Massive Talent” are the most Nicolas Cage thing ever, and Cage’s representatives told IndieWire that the description as reported is “mostly accurate” but that Cage’s role is “different.” More specific details remain under wraps as deals for the movie get finished up.

According to THR, in the film, Cage is chasing a role in a new Quentin Tarantino movie. (The real-life Nicolas Cage has long been vocal about wanting to work with the “Once Upon a Time in Hollywood” director.) But meanwhile, he’s tangled up in a bad relationship with his teenage daughter, and haunted by his 1990s doppelganger, who criticizes the present-day Cage for his poor choices in roles and lack of star power. (Also in real life, Nicolas Cage’s last major studio movie was 2011’s “Ghost Rider: Spirit of Vengeance.”) In the movie, Cage is also deeply in debt and thus trying to woo a billionaire to buy a new script he’s been working on. But Cage finds out from the CIA that the billionaire is actually a drug cartel leader, and so Cage is tasked with gaining intel on the man, who has kidnapped the daughter of a Mexican politician.

The screenplay comes from Tom Gormican and Kevin Etten, who were co-creators of the busted, one-season 2017 Fox comedy series “Ghosted.” Gormican is attached to direct, and his only prior feature directing credit is the 2014 “That Awkward Moment,” the raunchy buddy comedy starring Zac Efron, Miles Teller, and Michael B. Jordan. Sources told THR that the script for “Unbearable Weight” was originally a spec from Gormican and Etten, but enough people saw it to garner interest.

Those sources also reported that Gormican personally sent the script to Nicolas Cage begging him to star in the movie, and Cage then became attached. The movie reportedly isn’t making fun of Cage so much as homaging and paying tribute to his entire career, with references to “Leaving Las Vegas,” “Face-Off,” and “Gone in 60 Seconds” throughout, and with a tone obviously indebted to “Adaptation,” another meta movie that showed a different side of Cage.

This Article is related to: Film and tagged Nicolas Cage