"These screenings are all about seeing a work the way a filmmaker originally intended to show it," Nolan said at a presentation at the Egyptian Theatre in LA. 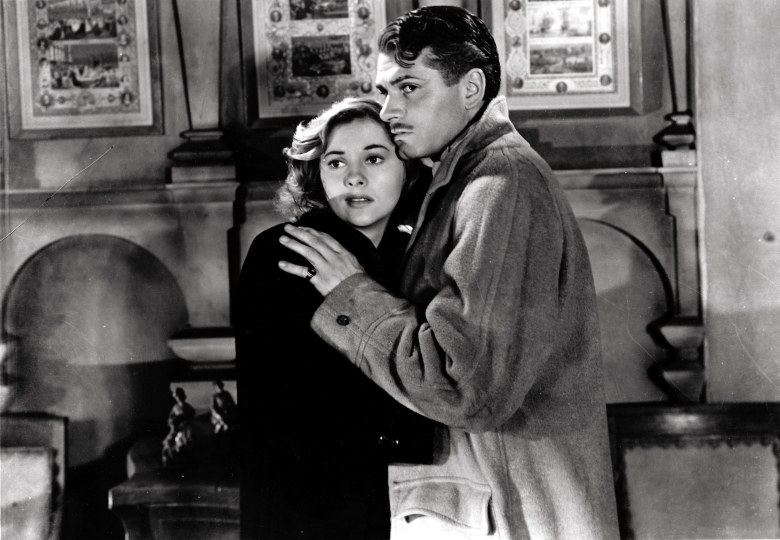 It was the go-to motion-picture medium for the first half of the 20th century, but after nitrate film stock was discontinued by Kodak in 1952, nitrate prints of many classic movies were given a lonesome life locked away in vaults. That’s in part because nitrate film is very similar to guncotton, so flammable that it burns even underwater — haphazard handling can lead to disastrous effects when you’re talking about film moving through a projector at 24 frames per second, inches away from a red-hot 6,000-watt bulb.

“It’s a lot of work,” said Jared Case, curator of film exhibitions at the George Eastman Museum based in Rochester, New York. “It’s a museum artifact that needs a tool in order to be seen. You have to maintain the projectors. You have to make sure that they are clean and that they’re running properly. Our chief projectionist is so careful about the safety of his coworkers that he’s careful about when he inspects to make sure there’s no rough edges. Everything’s got to run through smooth, the splices are secure, they’re not going to come apart in the projector and sit there in front of the lights. Everything takes a little bit more time.”

But for Case, that time and care is more than worth it: Like other kinds, nitrate prints have a finite life that, in the most ideal circumstances is measured in hundreds of years — he believes they must be shown before inevitable deterioration renders them un-screenable.

On Saturday, he shared one of the Eastman Museum’s nitrate prints with a sold-out audience of 600 at the Egyptian Theatre in Hollywood: Alfred Hitchcock’s “Rebecca,” which in 1940 earned Best Picture for producer David O. Selznick. It was part of a weekend series of nitrate films presented by the museum, the Library of Congress, the Academy Film Archive, and the UCLA Film & Television Archive at one of only four locations in the country equipped to project nitrate. 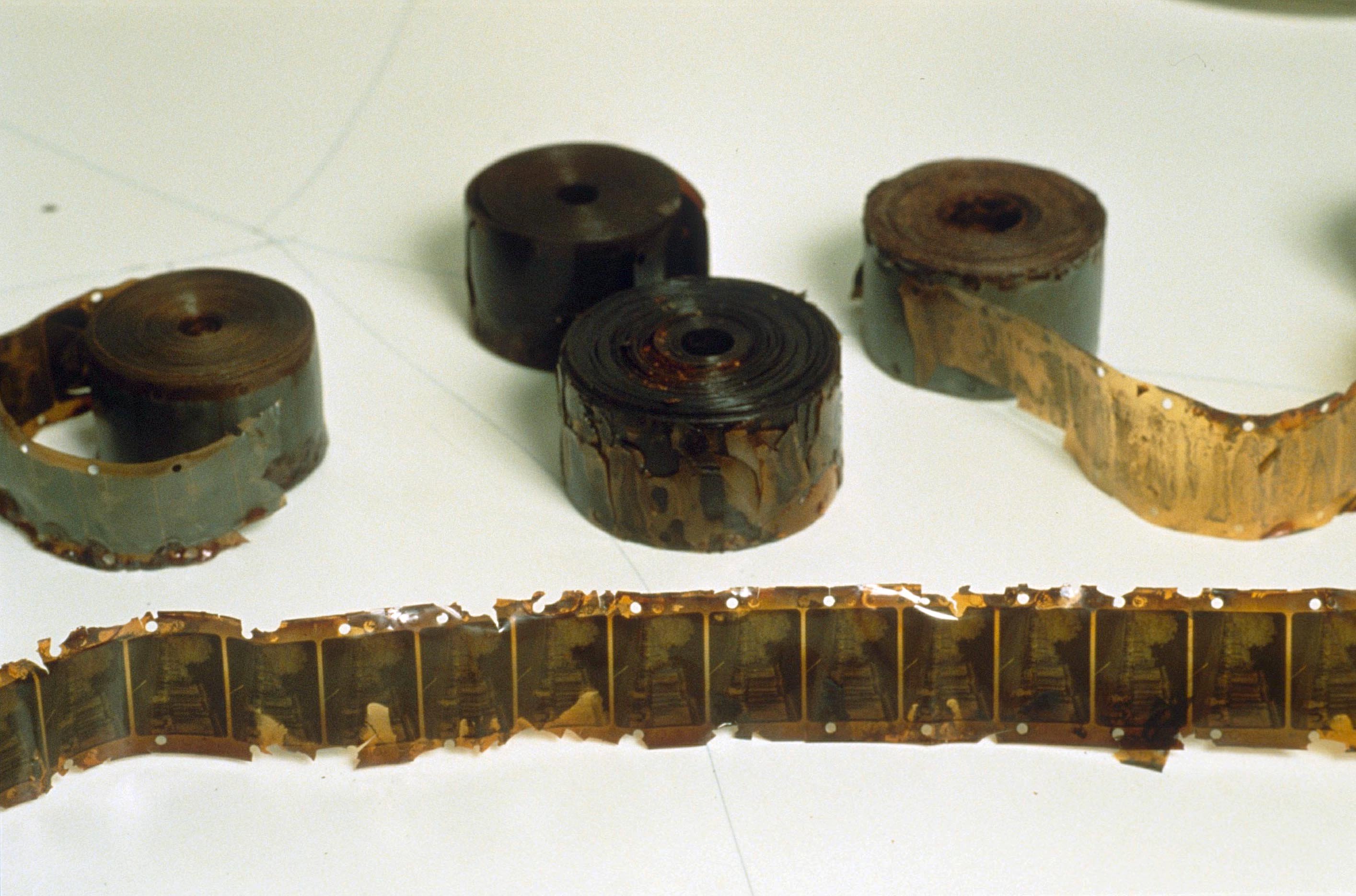 The film, starring Laurence Olivier as a brooding and mysterious widower and Joan Fontaine as his second wife who copes with living in the shadow of the late Rebecca, was introduced by Christopher Nolan. The “Inception” and “Memento” director reminisced on his experience seeing “Casablanca” on nitrate after viewing it for years on other mediums.

“It was just a transformative experience — a film I love and got to experience in a very different way,” Nolan said. “These screenings are all about seeing a work the way a filmmaker originally intended to show it.”

For Case, the difference between acetate or polyester “safety film” and nitrate is the depth it offers: Westerns offer vistas that invite the viewer to reach out and touch something all the way in the background. Case’s entry point into nitrate love comes from his fandom of film noir which, like “Rebecca,” shine with the silver-heavy processing.

“There’s no better way to see film noir than on a black-and-white nitrate print, with all that silver in the emulsion and those stark shadows and the clean lines between light and dark and the gradations of gray, that really represents sort of the in-between nature of these protagonists,” he said.

In “Rebecca,” the silver crystals in the emulsion make Fontaine’s tears glimmer as the light reflects off the screen. Beams of light are brilliantly luminous and blacks are rich.

While “Rebecca” rarely appears at the top of critics’ list of best Hitchcock films despite its acclaim, Nolan postulated a nitrate viewing would further highlight the unquestionable artistry and craftsmanship that went into the British Hitchcock’s first American film. “Seeing it the way the audience would have seen it, I think, is a really, really exciting opportunity,” he said.

And a rare one too. Two other American venues equipped for nitrate screenings are in California, the James Bridges Theater at UCLA and the Stanford Theatre in Palo Alto. The only other is in New York, at the Eastman Museum.

The American Cinematheque’s Egyptian got the capability three years ago thanks to a collaboration with Martin Scorsese’s Film Foundation, the Hollywood Foreign Press Association, and Turner Classic Movies. The projection booth at the Egyptian’s largest theater needed a fireproof retrofit in order to be suitable — everything is enclosed, including the booth which is equipped with a giant steel door. Fire chambers surround the feed and take-up reels, and several fire extinguishers are built into the projector. The reels are stored in a separate fireproof room. 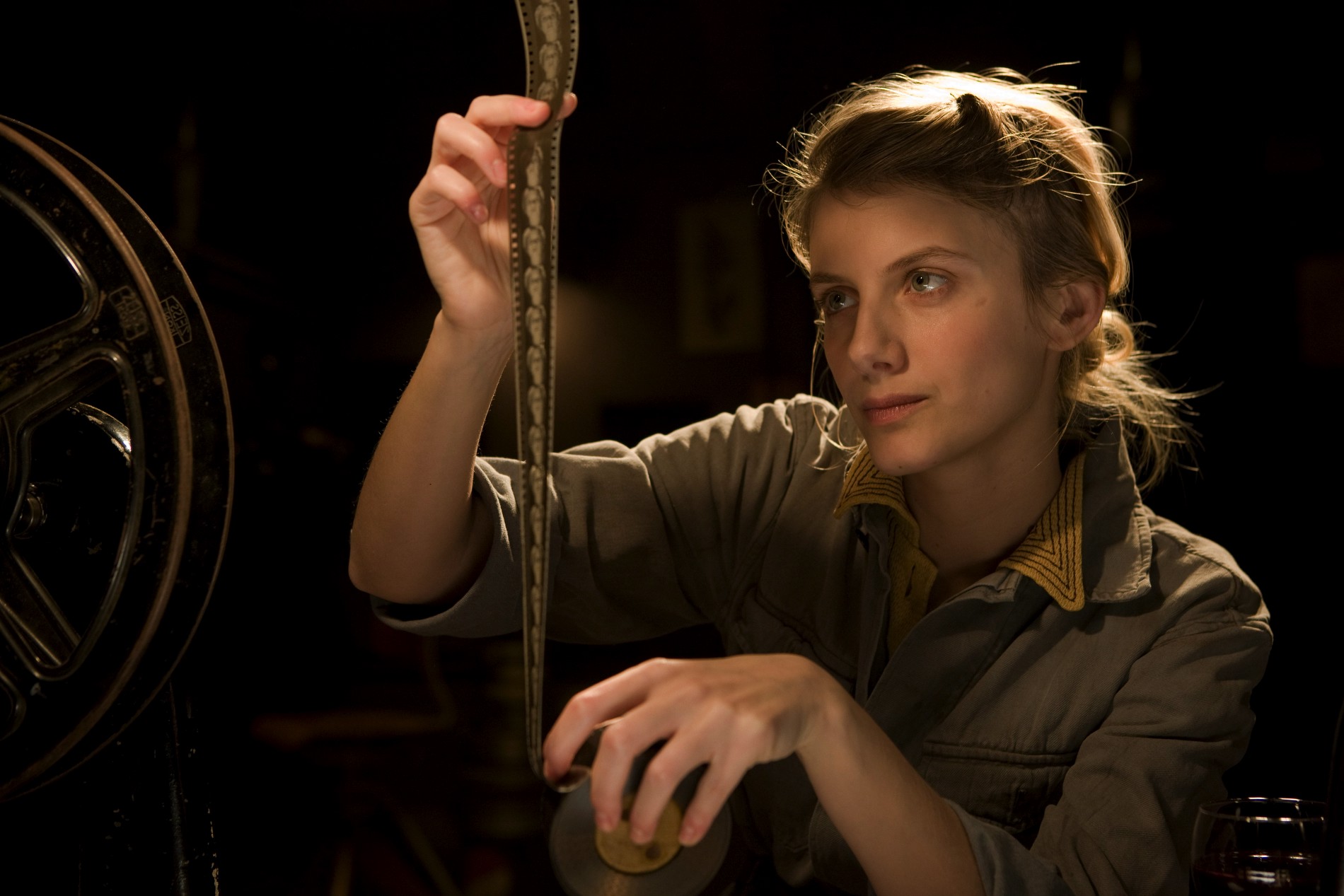 The flammability of nitrate film played a role in Quentin Tarantino’s “Inglourious Basterds.”

Despite the deadly difference between nitrate and safety prints, the Cinematheque’s chief projectionist Ben Tucker says he takes his detail-oriented work just as seriously no matter what kind of film he’s projecting. “Any time you’re projecting film at this point in 2019 it’s a rare object,” he said.

For “Rebecca,” Tucker and his colleague manned the booth to perfectly exhibit the film’s 14 reels, each of which is between seven and 10 minutes long. “You’ve got to watch the projector carefully because it’s nitrate and because it’s such a special print and you’ve got to keep your eye on the screen because that’s what the audience is looking at,” said Tucker, contributor to the recent book “The Art of Film Projection: A Beginner’s Guide.” “Make sure it stays in focus and framed up. You’re threading every seven, eight, nine minutes and winding the print too.”

The print is one of a quarter-million objects in the Eastman Museum’s collection. “Rebecca” was given to the museum by Daniel Selznick from his father David O. Selznick’s collection, Case said.

The museum tests nitrate prints regularly for shrinkage — even just a 1% change in the length or width of a print make them un-screenable — as well as for various stages of decomposition. The “Rebecca” print is in very good shape, Case said. 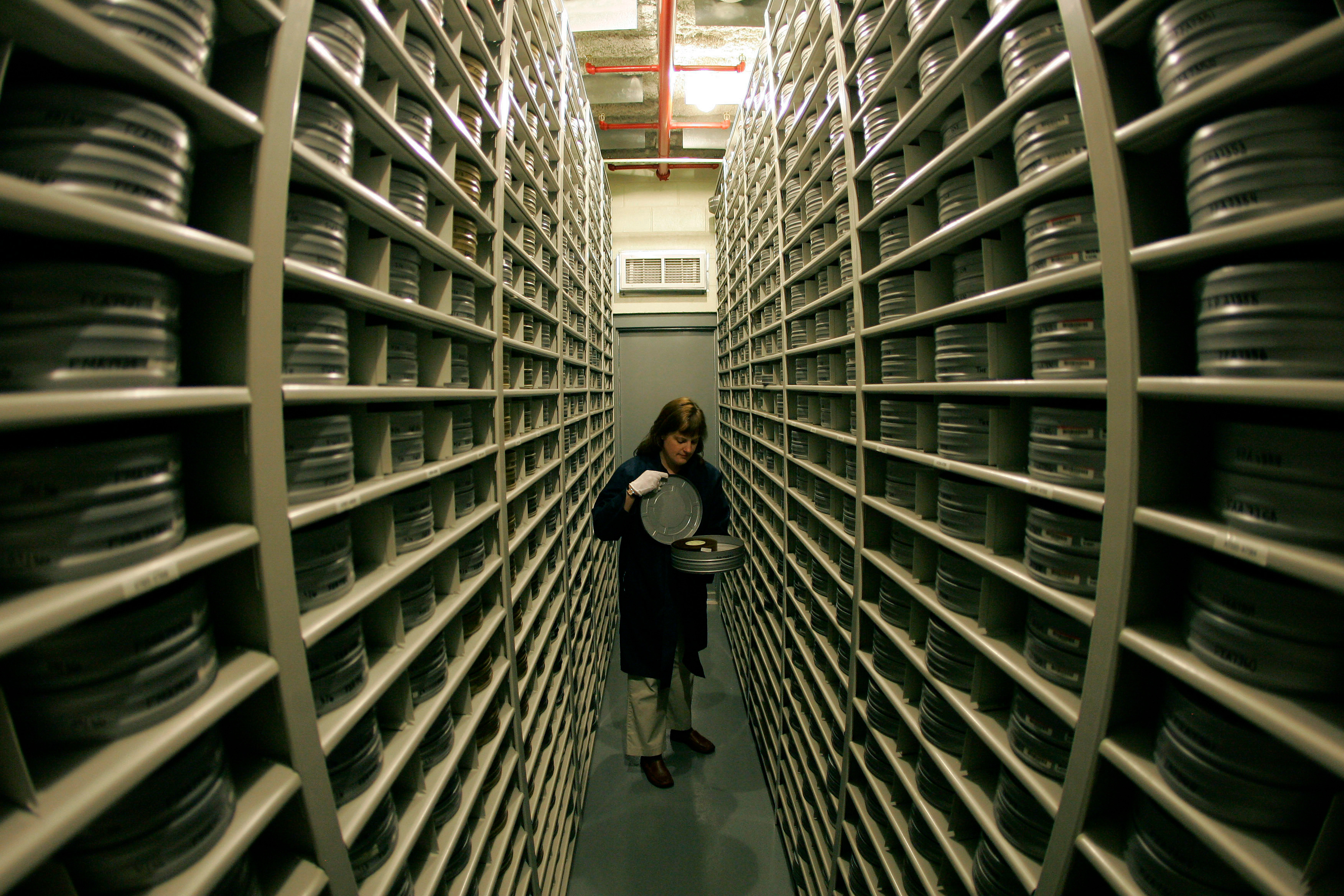 Deborah Stoiber looks for a movie inside the nitrate film vault at the George Eastman Museum’s Louis B. Mayer Conservation Center.

However, others such as the museum’s print of “The Red Shoes,” are not. But that doesn’t mean all is lost.

“Martin Scorsese also has a print of ‘The Red Shoes’ on nitrate deposited with us. And what we did last year was, we sort of put reels together because he had a reel that was very damaged on the side in the middle, so we couldn’t use that. So we used most of our own print and then the last two reels of Scorsese’s print and it made this perfect show — Frankensteining these things together,” he said.

Prints from the Eastman Museum and collections from around the world are screened at the museum’s Nitrate Picture Show, which returns to Rochester for its sixth year in June, where everything from shorts to avant-garde films to itinerant filmmakers’ work and travelogues are screened to an audience that comes from all corners of the globe to enjoy the pictures they way they were meant to be seen.