The "Ant-Man" actor also reveals just how often he turns to his infamous "Celery Man" video for creative inspiration.

Paul Rudd and Paul Rudd in “Living With Yourself”

Paul Rudd, he’ll have you know, is not a method actor. But that didn’t stop the “Living With Yourself” star from exhibiting a few character-specific traits — when the cameras weren’t rolling — during production on the new Netflix series.

The show centers around a burnt-out, dissatisfied suburbanite named Miles Elliot (Rudd) who attempts to get his mojo back via a strip mall massage parlor. Instead, Miles finds himself with a significantly unhappy ending, waking in a shallow grave and discovering he’s been replaced by, well, himself.

Created by Tim Greenberg and helmed by “Little Miss Sunshine” directors Jonathan Dayton and Valerie Faris, the show serves as a perfect showcase for Rudd to display both the breadth and depth of his acting ability, playing two similar, but different versions of Miles throughout the first season’s eight episodes.

Rudd, Dayton, and Faris sat down with the hosts of IndieWire’s TV podcast “Millions of Screens” to discuss the the series at length, during which time Rudd detailed a few of the strategies he employed to better embody the subtle differences between “Old Miles” and “New Miles.”

“A little can go a long way in really specifying a person,” he said, mentioning that slight differences in hair, clothes, and posture ended up making huge differences in the perception of each Miles. He added that smiling helped a lot. “I felt that when I was playing each part, I felt very different. I felt like I was playing two very different characters and some of those changes manifest themselves almost subconsciously,” Rudd said.

But there was one conscious character choice that Rudd was making off-screen, though he’s not sure anyone ever noticed. Specifically, when the actor would return to the changing area after a scene as Old Miles, he would leave his clothes strewn across the floor. Alternatively, after a scene as New Miles, Rudd would always hang his clothes up. Every. Single. Time. He’s not sure the wardrobe department ever noticed the distinction. “They just think he’s an asshole,” Faris deadpanned. 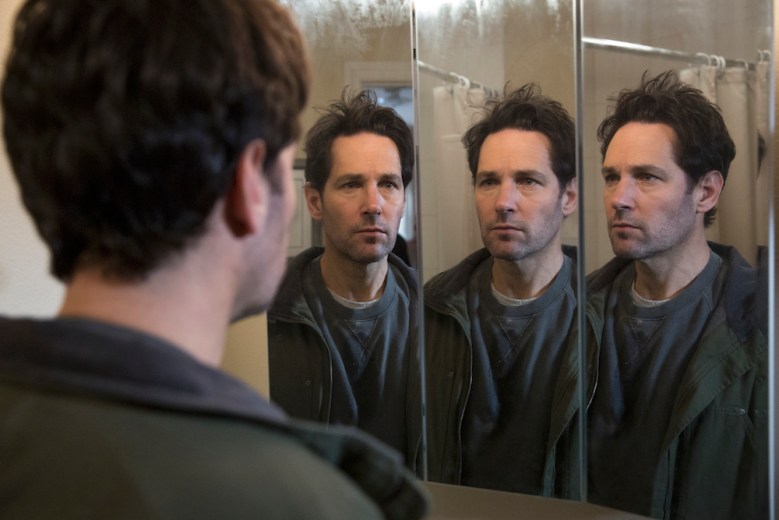 Paul Rudd in “Living With Yourself”

The series is a landmark for the directors, as well as for Rudd, marking the first time any of them had committed to tackling a full-time TV gig. For Dayton and Faris, the biggest distinction between the mediums came down to a matter of timing.

Dayton described the long-form series as “a new animal that they were dealing with” that was great and a unique opportunity, while also challenging you to find a rhythm while working.

“Everything is accelerated,” Faris added.

All the same, the trio found something exhilarating about the frenetic pace the series forced them to work at.

“The speed of it was really kind of fun,” Faris said, in response to Rudd’s enthusiasm about being forced to employ creative problem-solving during the shoot, explaining that they don’t like to belabor things on set or engaging in long-drawn out conversations in the middle of filming.

“The prep time could have been a little longer, though,” she added.

Hear more from Rudd, Dayton, and Faris as they discuss the complicated mechanics of filming a Rudd-on-Rudd fight scene, the emotional complexity of philosophical uncertainty, and the prospect of a second season on this week’s episode of “Millions of Screens” with TV Awards Editor Libby Hill, TV Deputy Editor Ben Travers, and Creative Producer Leo Garcia. The episode also features conjecture about Netflix and David Fincher’s potential “Chinatown” series, as well as some incisive commentary on Damon Lindelof and dogs.

This Article is related to: Television and tagged living with yourself, Millions of Screens, Netflix, Paul Rudd, Podcasts