Reinforcing some old ideas, Rick's quest for ultimate privacy and a globe-enslaving dating app are a flimsy foundation for a repetitive episode. 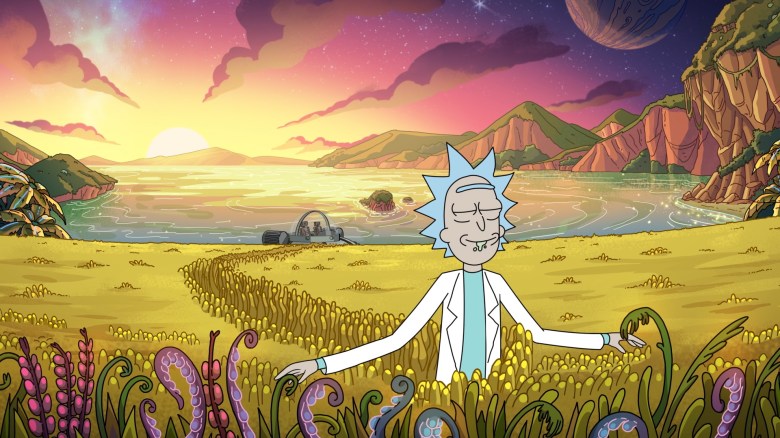 [Editor’s Note: The following review contains spoilers for “Rick and Morty” Season 4, Episode 2, “The Old Man and the Seat.”]

For some reason, love never goes the right way in the world of “Rick and Morty.” More understandably, overreacting to a single slight never really does either. Two weeks into Season 4, the show has presented a pair of episodes that mix those two ideas to very different ends. It’s enough to form a pretty helpful thesis for the entire four-season series, how the inability to accept less than perfection can get in the way of meaningful relationships.

The relative size or importance of these injustices don’t necessarily translate to the overall quality of a “Rick and Morty” episode. It’s more about what that resultant search for payback brings. So “The Old Man and the Seat” does feel like a lesser entry in the show’s frustrated love/frustrated circumstances history, mainly because it rests on two oft-repeated ideas: soulmates and bathrooms (in whatever order you choose to prioritize them).

Describing the episode’s pair of elevated B-plots is easy enough. On a trip to an isolated part of a planet he’s designated solely for taking care of his business, Rick discovers that his blissful slice of toilet paradise has been subject to an intruder. Back on Earth, Jerry’s inability to follow one simple rule (“Do Not Develop My App”) plunges society into chaos when a too-perfect version of Tinder sends all its users on a constant string of partner changing.

“Rick and Morty” knows how to mine simple premises for a brilliant execution. (For proof, take a look through most of the handful of the show’s best episodes.) Those standout installments sometimes use repetition to help build out and reframe a basic idea over and over. Here, having Jerry be even more a walking punchline than ever (however redemptive his ultimate “live for yourself” message is) or Rick refusing attempts at friendship from the being responsible for invading his commode (impeccably voiced by Jeffrey Wright) don’t add up to more than variations on themes the show has executed better elsewhere.

As the ideas of other worlds fly by in this show, they’re usually a helpful barometer for how effective the rest of the episode is. With Morty’s obsession driving last week’s accelerated arrival of the singularity, the suggestion of all the Alternate Rick realities were helpful side quests propping up the central story push. Here, a thinner pair of storylines means that Rick’s convoluted search for the toilet intruder brings up more interesting questions than the rest of the episode. (Who doesn’t want a five-part deep dive into the geopolitical origins of the galactic war between delivery droids and mutated gators?)

Bringing up other possibilities also just underlines how much “The Old Man and the Seat” is invested in you thinking that the word “pooping” is funny. It certainly is if it’s part of a command that Rob Lowe is making into a mirror. And here, Wright certainly manages to pull off the impossible: sliding the word into a poignant remembrance of a dead spouse. But when you strip away the majestic galactic shootouts and rainbow-colored vistas of Rick’s chosen bathroom planet, there’s just not much else besides wringing everything out of describing a handful of toilet trips.

That undercooked side story does give the show a chance to put its flex its logistical muscles for the second week in a row. The suspended animation vat (particularly the frightening semi-conscious twisting), the mechanics of entering and traveling through the layers of Rick’s underground security lair, and the army of episode-closing taunting Ricks all use familiar touchpoints to help fill in how important this whole effort could be. (Also, it might be a coincidence, but Rick may have borrowed a killing move on one of the gator soldiers from “The Raid: Redemption.”)

Even with the parting “Big Bad Doo-doo Daddy” joke (one can only imagine what the whiteboard full of alts for that looked like), “The Old Man and the Seat” ends up as the equivalent of a mild inconvenience. Given the big-picture ideas it’s playing with and the potential to build on some well-established templates, it’s not hard to imagine that in the context of this new batch of “Rick and Morty” stories, this is one that might easily get flushed away from memory.

Guest Star Recon: Compared with the Rick and Morty-dominant season premiere, this episode is downright packed.

Between this and the Netflix “Green Eggs and Ham” series, what a fortnight for Wright, who keeps adding some wheelhouse voiceover work to an already impressive career resume. As straightforward and uncomplicated the Monogatrons are as would-be Earth overlords (that their plot ends with a whimper after Glutey’s paywall is a hint that there wasn’t much at stake to begin with), Kathleen Turner and Sam Neill’s back-and-forth does add a tiny layer of something else beyond a simple desire to take over.

In another casting choice that ends up summing up the episode’s unfulfilled potential, that’s Pamela Adlon as one of the hundreds of thousands of fly crimelord children leaving a message on his phone. Sure seemed like a one-off, but hopefully bringing her in for one line here is a setup for a future return to the insect-controlled underworld. (Plus, after Birdperson, it’s always interesting to hear Dan Harmon voice a character closer to his natural speaking voice.)

And finally, “Rick and Morty” gets one step closer to filling in its “What We Do in the Shadows” cast member Bingo card by nabbing Taika Waititi as the voice of Glutey. Much like Jemaine Clement brought some innate curiosity to Fart, the sentient gas being from Season 2’s “Mortynight Run,” Waititi does a lot to elevate Glutey with his natural, carefree charisma. The character’s last spinning exit is mostly a visual gag, but Waititi’s “Glutey-dooty doo!” is a wonderful little button.