The profane British comedian promises to burn his bridges at the Golden Globes. 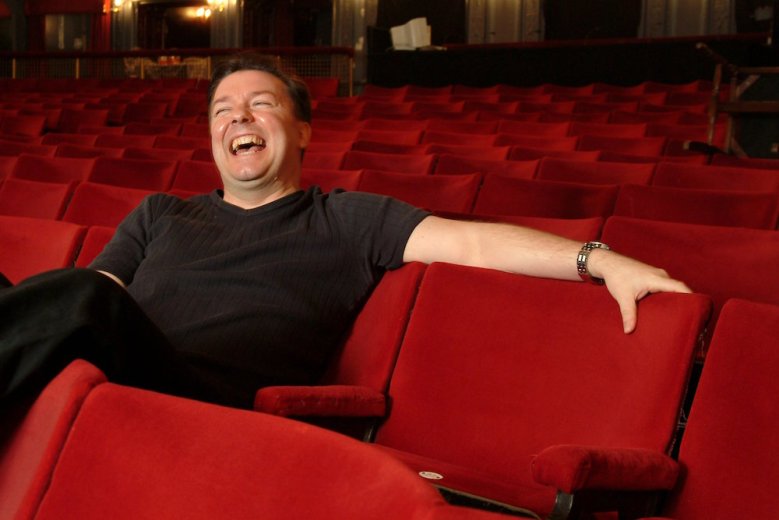 Bucking the current hostless award show trend, the Hollywood Foreign Press Assn. is bringing back “After Life” star Ricky Gervais for a fifth go-round as the feckless host of the Golden Globes. He’ll emcee the three-hour 77th installment of the glittery Globes telecast at the Beverly Hilton on January 5 on NBC, which starts at 8:00 p.m. ET.

Gervais hosted the Golden Globes in 2010-12 and returned for a fourth time in 2016. Four years later, Gervais is promising to burn his bridges. “Once again, they’ve made me an offer I can’t refuse,” he said. “But this is the very last time I’m doing this, which could make for a fun evening.”

“When Ricky Gervais is at the helm of the Golden Globes Awards, we can always expect the unexpected,” said President of the HFPA Lorenzo Soria.

The 90-member HFPA, who cover the entertainment industry for some 55 countries, will hand out their awards in 25 categories — 14 in film and 11 in television.

The creator and comedian star of “The Office,” “Extras” and “Fame” has won three Golden Globes, two Primetime Emmys and seven BAFTAS. Global smash “The Office” is shown in more than 90 countries with seven remakes. The NBC version is the most successful U.S. remake of a British show in more than 30 years.

Gervais created, directed, executive produced and starred in the dark comedy “After Life,” which premiered March 8 worldwide on Netflix and will return for a second season in 2020. In 2017, Gervais toured worldwide with his first stand-up special in seven years, “Humanity,” which was also recorded as a Netflix special. His recently embarked follow-up tour “SuperNature” will also be released on Netflix.

Produced by dick clark productions in association with the HFPA, the Golden Globe Awards are viewed in more than 210 territories worldwide. Last January’s NBC telecast of “The 76th Annual Golden Globe Awards” averaged 18.6 million viewers in “live plus same day” Nielsens, delivering the biggest audience for a primetime telecast (excluding news and sports) since the March 2018 Academy Awards. The show also generated a year-to-year increase in the key adults 18-49 demographic, with a 5.2 rating vs. a 5.0. That 5.2 more than quadrupled NBC’s non-sports 18-49 average in the timeslot the previous season; the audience of 18.6 million was up 13.5 million persons versus the prior season’s average.

The 2019 Golden Globe Awards telecast averaged a 5.2 rating in adults 18-49 and 18.6 million viewers, according to Nielsen Media Research.