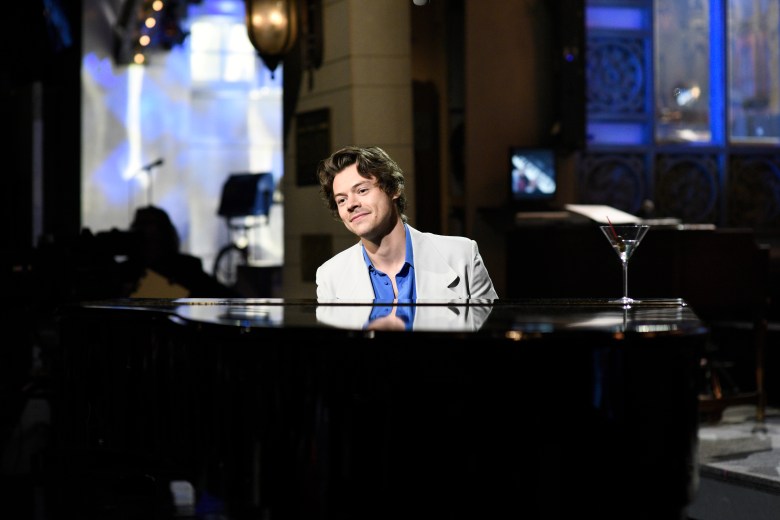 This week’s “Saturday Night Live” saw musician (and noted comedy nerd) Harry Styles return to Studio 8H in the coveted dual host-musical guest role. Naturally, comparisons can be made to Justin Timberlake and the recent host/musical guest Chance the Rapper, but much like in his career post-One Direction, Styles had to make his own way here.

The go-to “SNL” monologue for a musical artist is, of course, a musical monologue. Yet despite the eventual piano, that’s thankfully not what the episode provided. Instead, “SNL” showed off Styles’ dry yet somewhat absurd sense of humor early with the opening monologue. Taking a page out of Zach Galifianakis’ playbook* with the piano and teasing a reunion with his One Direction brethren (minus Zayn Malik but plus Ringo Starr), the typical first-time hosting jitters were nowhere to be found. Not even during the close-up shot of “his” hands.

*Perhaps that is why Jon Hamm showed up as the celebrity cameo-of-the-week in the cold open: Maybe he was told Galifianakis was hosting again.

Of course, Styles also had the benefit of having appeared in sketches before, but those moments didn’t come with the chores of being the actual host and having an episode of “SNL” crafted around him. Styles joked in his monologue that the most important part of all of this was being the musical guest rather than the host. Come on. That aloof attitude defined this monologue and, really, this episode.

This season of “SNL” has been consistent in showing that it can still make jokes that revolve around race without punching down, and remaining genuinely funny. Which is where the first sketch of the night, the Popeye’s “Lunch Run” sketch, comes in. It’s no surprise that Ego Nwodim, Kenan Thompson, and Chris Redd are the stars of this particular sketch too, as that’s been the case much of this whole season. (See: “Mid-Day News.”) Styles’ new intern character “Rob from the UK” also serves as a great straight-man for Nwodim, Thompson, and then eventually Redd’s characters, in a part where the low-key and quite oblivious nature of the role only makes it funnier. However, this is also arguably a sketch where anyone else — be it a different host or a cast member or Jon Hamm — could’ve played the Rob role.

The funniest part of the stinger revealing that the sketch is really “Jordan Peele Presents ‘White Get Out’ … Now Available on Disney+” actually gets glossed over because of the laughs over the fact that Harry Styles stars as “‘Intern Robert E Lee’.” The “Robert E. Lee” part isn’t even technically necessary for the sketch to work, but it’s a little bit that simply adds to it all.

When it comes to “SNL” and product integration, this was definitely the strangest episode so far. While the “Lunch Run” sketch hopped on the craze of Popeye’s chicken sandwich, the “Sara Lee” sketch even noted that it made Sara Lee look thirsty — even though it proved that Sara Lee is really concerned with getting “rid of toxic in community.”

The “Sara Lee” sketch also spoke to the strength of the voices that certain cast members and writers have on “SNL”: Even before knowing this sketch was written by writer-turned-cast member Bowen Yang and writer Julio Torres, comedy nerds can sense their presence here. Not even just because Torres also played the Instagram “random fashion twink.” This sketch captured the very specific “brand identity” stuff that social media accounts are never not doing these days (even though that wasn’t the focus), while flipping the premise on its head. Styles’ character is a sad-sack gay man — and the joke is never that he’s gay — running the Sara Lee social media account, who can’t seem to be deliver the queer brand account you’d expect. Again, because of all the “toxic in community.” Another low energy sketch, but in this case, that’s where the joke comes from.

Yang’s sketches also have these little moments that aren’t necessary to the actual premise of the sketch but start them off on a high note. Like at the beginning of this sketch, when Cecily Strong’s character calls his character “Santino,” only for him to correct her and say that it’s “Jake.” There is no reason for this contentious moment at the top of the sketch, other than the fact that it sticks out and adds character.

As funny as “Airline Pilots” is and despite the “Scooby-Doo” voices, Styles is honestly overshadowed by Mikey Day (the sketch-ending “sit black” tangent alone is worth the price of admission) as the pilot to his co-pilot and very concerned passengers Kate McKinnon (“Why do they keep saying JetBlue? it’s not a JetBlue flight.”) and Ego Nwodim.

Best Sketch of the Night: “That’s The Game”

Perhaps the most “Key & Peele”-esque sketch in “SNL” history, “That’s The Game” features Chris Redd as a gangsta who decides to take over the drug operation he ran with his partner (Kenan Thompson). (Styles and Day play the henchmen who bought into Redd’s vision.) But this sketch brings up the very important point most movies ignore on a larger scale in these types of scenarios: The criminal who stages the coup is usually the one who has no idea what it takes to actually be in charge. That’s why they weren’t in charge in the first place. And that’s why Redd ends up not in charge — again — in the end.

Styles and Day are good as the henchmen — who are the real idiots, based on who they hitch their wagon to — but this sketch belongs to the increasingly incompetent (thinking $30,000 worth of cocaine is only worth $100, not knowing how to use his gun) character Redd plays and Thompson’s subtle supporting role as the real boss with actual knowledge. It’s rare to really see Thompson play subtle — which has always been both his greatest criticism and biggest strength on “SNL” — which is a large part of why it really works. In an episode heavily-dedicated to Harry Styles’ acting, Kenan Thompson is able to show off his chops just as well.

This is a category that really hasn’t been applicable since Season 43 — after the Ryan Gosling episode where Aidy Bryant dressed up like a chicken, then multiple episodes had Aidy Bryant either dress up like an animal or work in sketches with animals (or people dressed like animals) — but for this particular sketch, it deserves to make a comeback. It’s an unassuming sketch at first, only to get weird but avoid creepy, and then to get even weirder and still avoid creepy. “My dog is my boyfriend / We are in love / He’s a 12-pound chihuahua / I found him on the street and named him Doug” is a line that suggests some seriously weird things are going down in this sketch.

And then the dog transforms into Harry Styles, thanks to “God… and his friends.”

Also a positive? Yes, it’s another dog sketch in this season strangely filled with dog sketches — like in this episode’s “Airline Pilots” — but it’s also a pre-taped dog sketch where the joke is more than the dog itself being cute, and poor Cecily Strong doesn’t have to attempt to do any live, on-air wrangling while working.

Not a bad sketch, merely a one-dimensional one, “my dudes.” Heidi Gardner could probably fill a whole episode of “SNL” with influencer characters and it would be extremely entertaining. But this particular influencer couple — from Iceland, on “lip-syncing visas” — wasn’t her best, even though it allowed Styles to do some mandatory “SNL” accent work. There’s really nothing surprising about the sketch and the characters outside of “lip-syncing visas,” to the point where the sketch essentially is a countdown to Gardner saying the obligatory “I have never exercised” line. But the live crowd really enjoyed it, as it was the earliest live sketch to get Styles to play a “wacky” character.

In case you were wondering what ever happened to Baby Faye, both women get a chance to shine individually in this episode, but the sketch that allows them both to shine together is what solidified their spots and top female performers this episode: “Baby Faye and Her Newsboys.” The sadness of Strong’s Baby Faye was only amplified by Bryant’s coldness as her abusive stage mother in a wheelchair. And whil that sentence doesn’t actually sound funny, as it turns out, it made for comedic gold in this bizarre sketch.

As a first time host — especially of the double duty host-musical guest variety — Harry Styles proved himself just as adept as one would expect. But the biggest strike against the issue itself is how low-energy it was from the very beginning. Not necessarily in the sense of being too subtle — because it’s definitely not an issue for “SNL” to be less loud — but in it not quite finding the next gear for its bits and jokes.

The cold open is a really good example and timely, considering the fact that “Days of Our Lives” had just been effectively canceled this week. But while there are great bits (Heidi Gardner’s repetition and fainting gag, Pete Davidson’s Michael Avenatti only having news from “last season,” and Melissa Villaseñor making out with Jon Hamm) and a genuine premise, which has been lacking in most cold opens, the sketch was just basically the cast (and Jon Hamm) telling people the news. There’s a stilted delivery that even soap opera actors would scoff at — or anyone who has ever done a “Californians” sketch — and it didn’t help that Pete Davidson’s bit was just reminding everyone that he’s too cool to know about what’s going on in the world. A bit that Michael Che doubled down on in Weekend Update.

Speaking of Weekend Update, Kyle Mooney’s Scooter Rineholdt was extremely dark — and on-brand with this episode, in a sense. This probably isn’t a character that should be used a lot — he’s suicidal — but it was great while it lasted.

The odd pacing of “Days of Our Impeachment” filled the air of the live sketches in this episode, even though there was nothing technically wrong with the delivery on Styles’ end, and no one was exactly botching anything either. (Styles mildly broke in “Childbirth Class,” but that was it.) While Styles got to show off his acting chops in this episode and play a large range of characters, he seemed to also bring the aloofness he had in the opening monologue to every live sketch except for “Baby Faye and Her Newsboys” and “Funeral DJs.” (which had a music bit that hopefully doesn’t get it removed from future reruns for music rights reasons). To compare him to about double duty host-musical guest, he didn’t have the theatre kid energy of someone like Drake… and it kind of would have been better if he did.

The sketches themselves were interesting and weird enough to work (and they did), but to also borrow from the cold open and the impeachment hearings criticism: The episode was still lacking in pizzazz.