Unfortunately, there are no Totino's Pizza Rolls or F-bombs for returning host Kristen Stewart this time around. 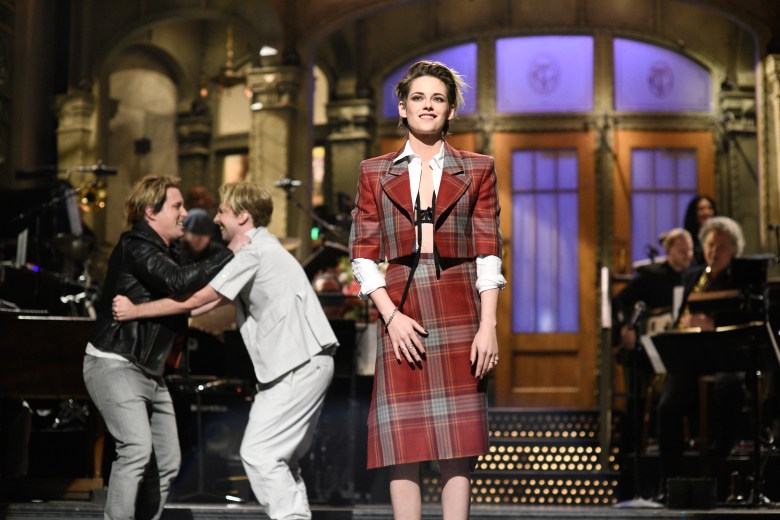 Last time Kristen Stewart hosted “Saturday Night Live” — which was also her first time hosting — she dropped an F-bomb and provided the world with the greatest Totino’s Pizza Rolls commercial ever. Neither of those things happens this time, which ultimately says a lot about how the episode ends up. Not specifically the fact that Stewart and “SNL” don’t just repeat what made her hosting debut work but the fact that “SNL” doesn’t give Stewart anything all that memorable to work with. And the fact that she doesn’t even say “fuck” to save any of it. (Because that really could have saved that “Hungry Jury” sketch.)

First of all, the most disappointing thing about this episode, heading into it, is that it didn’t make Kristen Stewart pull hosting-musical guest double duty. This is absolutely no offense whatsoever to musical guest Coldplay; it’s just that, for many, many weeks heading into both this season and this episode, “SNL” had yet to announce a musical guest to go along with Kristen Stewarts’s already-announced hosting gig. If “SNL” ever made its host have to sink or swim like that, it would automatically be the most memorable “SNL” episode ever. Alas.

This is one of those episodes where it’s evident what the celebrity host is here to promote, but the “Charlie’s Angels” trailer that plays as the first commercial after this monologue is also there to remind you in case you missed it. But as Stewart even makes clear in her opening monologue, she’s kind of uncomfortable doing this and so brazenly promoting herself and the movie like this.

With one major exception, the subversion of the audience Q&A bit is the best moment of this entire episode. But the biggest problem is that it’s cut short to transition into Beck Bennett and Kyle Mooney dressing and acting like Stewart to get her to say that they look cool (a plan which works!), especially since that conclusion essentially makes this two monologues in one. And the latter part of the monologue is one that gets a lot more play lately, where the audience Q&A bit is rarely dusted off these days. (For as much flack as the musical monologues got in the Wiig/Hader era, it was still never as much as when the Fey/Fallon era did audience Q&As.)

The only reason “Corporate Nightmare Song” isn’t one of the best sketches of the night is because it takes place in a music world that only existed from 2001 to 2008. That’s not new for a pre-taped sketch with Kyle Mooney, but this is also not as detail-oriented as a typical Kyle Mooney nostalgia-based sketch. Even though it gets points for Kristen Stewart at least channeling Paramore’s Hayley Williams on a physical level.

Best Sketches of The Night: “Duolingo for Talking to Children” & “New Paint”

“Duolingo for Talking to Children” is perhaps the most honest sketch of the entire episode, especially when it notes people having to finally learn how to talk to kids, “because their friends are starting to have them.” This is also the first sketch that shows just how much more pre-tapes are in Stewart’s true comfort zone as an actress — or at least allow her to get more into that comfort zone — than live performance, with nerves and an audience you actually have to work with and around. The awkwardness that the episode plays with on Stewart’s part is thoroughly channeled here, in the most relatable sketch of the night. Let’s face it: kids are bad conversationalists. But you don’t have to be. Truer words have never been spoken on “SNL.”

And now for something completely different. There is nothing normal or honest or relatable about the “New Paint” sketch, which is a large part of its charm. This is 100% the best sketch of the night. While Aidy Bryant’s pronunciation of “colour” (making sure to pronounce the “u”) is a funny premise for the sketch on its own, what makes this skit so great is its progressive descent into chaos. Kyle Mooney as Bryant’s Facebook Marketplace “friend,” the realization that she blew all of her inheritance on this paint and paint accessories, Bryant blowing up Stewart’s spot about her affair — it’s all so good.

It’s funny this sketch is actually called “Rosie the Riveter,” as you have to actually remember that she’s (as played by Chloe Fineman, in the rare minuscule role for her at this point in her short “SNL” career) even part of the sketch at all. Or that the “point” of this sketch is the casting for the “We Can Do It!” WWII poster. Yeah, that gets lost in all the… Andrew Dice Clay (maybe?) impressions Aidy Bryant, Kristen Stewart, and Kate McKinnon are doing in this sketch.

While this sketch ends up ramping up, the biggest indication that it doesn’t work — and doesn’t actually have jokes — is the live audience. Of course, the “SNL” live audience loves to “woo!” just about anything, but their reaction to this isn’t the silence of a confused audience who doesn’t get a very specifically weird sketch. It’s the silence of a confused audience who’s waiting for a joke — literally any joke. Well, not necessarily “silence,” because there are laughs… but they’re the laughs of an audience that is only laughing because they know they’re supposed to be.

This sketch has two great moments: 1. Bowen Yang’s bailiff character calling himself a “bailifft” (and Stewart’s juror reacting accordingly) and 2. “You know this song?” “Of course I do. It’s by Magic Mike!” Otherwise, this is your standard “SNL” sketch that has no relevant hook and no good conclusion, but someone had an idea for a growling stomach song, so here we are.

This is a Bryant and McKinnon-heavy episode, though if you need to choose one over the other, Bryant is the one who absolutely steals the show. As honest as “Duolingo for Talking to Children” is, the stealth best part of it is at the end, when she wordlessly reacts to Kristen Stewart and Kyle Mooney showing off their Duolingo apps to each other.

The Good Neighbor boys have somewhat fallen to the wayside over the years with Mikey Day and (a conspicuously absent) Alex Moffat, but Beck Bennett and Kyle Mooney get their chance to shine in this episode.

In fact, in terms of Kristen Stewart’s actual sense of humor, this episode of “SNL” says a lot about who she feels most comfortable with to channel it: Bryant, Stewart, Bennett, and Mooney. All four of these cast members are extremely talented in their own ways, but while they all get their chance to shine this week, so much of this is far from their A-game. Kate McKinnon, especially, remains on autopilot, both on the Elizabeth Warren and Kellyanne Conway front and recurring characters like the Smokery Farms sisters with Aidy Bryant.

After a string of rather strong episodes — from good to great, even — this week’s “Saturday Night Live” returns the show back to its typical rut. The sketches truly seem to lack a strong perspective or purpose, only to fall into the dreaded half-baked “SNL” finish.

The episode was definitely written around Stewart as its host — which, as always, is the optimal writing choice — but it leaned too heavily into her shy, quiet, reserved vibe, when she clearly excelled at being given anything that either stretched it (“Corporate Nightmare Song,” “New Paint”) or at least leaned into it in an interesting way (“Duolingo,” “Stargazing”), even when the writing itself wasn’t strong or memorable enough. “A Proposition,” unfortunately, leaned into it (on her end) too much, with her being too aloof for the audience to really react to her part of it. Especially with both Ego Nwodim and Kenan Thompson really going for it with their oblivious (or at least intentionally obtuse reactions) and the Bowen Yang conclusion (which is actually set up early on). And “Stargazing” is, unfortunately, a somehow less sophisticated “The Lovers” sketch.

The biggest issue is that this episode just isn’t memorable enough, except for “New Paint,” which will surely have an oral history written about it soon enough.

There was no hate speech on Michael Che’s part this week on Weekend Update, but as mentioned last week, he once again immediately defends himself after another joke bombs with the live audience. (It’s NBC’s Standards and Practices fault, you see.) It’s literally become a bit that Che will have a joke fail and subsequently have to defend it. It’s expected, from one of the head writers of this show. Which ultimately speaks to the entire show as a whole.