The director and executive producer stuck by the Apple TV+ series through big changes and production delays to help tell an urgent story the right way. 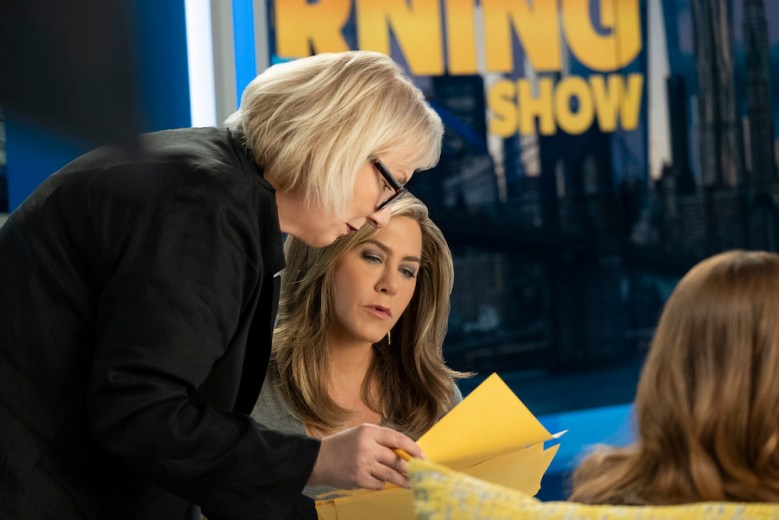 When most people are recuperating from a long, hard, challenging endeavor, they sleep in; they get a massage; they take it easy. Well, Mimi Leder said she’s “still recovering” from the first season of “The Morning Show,” and yet she’s already planning specific shots for Season 2.

“I had a great shot that I did not do [in Season 1] — and I’m gonna do it next season,” Leder said in an interview with IndieWire. “I was in the bullpen, bringing Hanna [Gugu Mbatha-Raw] in from the control room. I was on a long arm, a techno, and I pulled her back–“

Leder stopped herself. She was about to go into too much detail about a scene she hasn’t yet captured, and secrecy remains paramount for her Apple TV+ drama. “The Morning Show” has been an all-consuming undertaking for the director since production finally started a year ago, and one of the things she’s learned is to keep moving forward — except when it’s too good to let go.

“It was just a great shot, and I never got to do it because we kept changing the schedule,” Leder said. “I had the techno, and we’d change [the shooting schedule], and how many times can you order the techno and not use it? So you let things go.”

Kind of. Leder’s work on “The Morning Show” sounds as labyrinthian as early reports have made out, filled with delays, changes, and lots of passion. Apple’s torchbearer into scripted originals shifted course long before its November 1 launch and all after Leder signed up as an executive producer and director. She was onboard before they threw out the first drafts. She was there before Apple switched showrunners. She was ready and waiting while the new, #MeToo-focused scripts were being written.

“I wanted to direct all the episodes, but they didn’t have the scripts!” Leder said.

She stayed to direct three entries, in part, because of the potential she saw in the show’s essence; what couldn’t be lost in showrunner changes or rewrites or production delays. 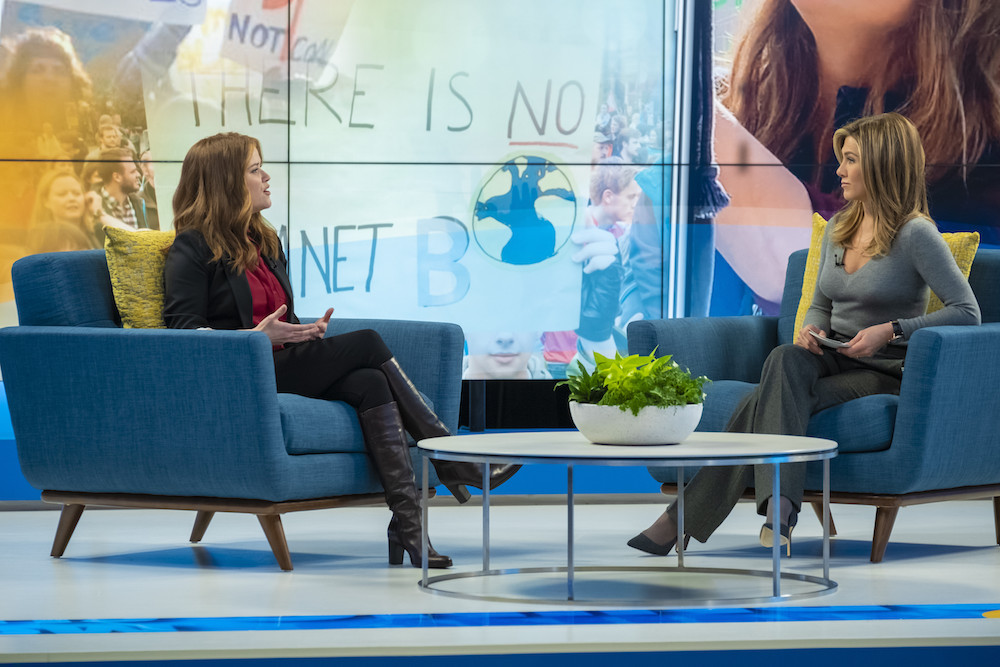 Reese Witherspoon and Jennifer Aniston in “The Morning Show”

“Tonally, I definitely wanted to keep the humor and the darkness,” Leder said. “When #MeToo happened, that had to be incorporated — and, I think, [it was] done very smartly. […] So often, women’s stories are told, historically, through a male lens. This was an opportunity to do a story about these women from [women’s perspectives]. Not all shows about women have to be directed by women, but there certainly haven’t been enough of them.”

Leder, hot off her 2018 Ruth Bader Ginsberg film “On the Basis of Sex,” felt like an ideal director for a story about two women trying to change the patriarchal rules of television news. Jennifer Aniston and Reese Witherspoon star, respectively, as the veteran host of a national morning news program and a roaming reporter toiling for the truth in America’s heartland. Fate in the form of an ousted co-host (played by Steve Carell) bring the two together to form a new duo for a new, post-#MeToo future.

An admirer of “Network,” “The Larry Sanders Show,” and “Broadcast News,” the veteran director behind “E.R.” and “The Leftovers” went to work fusing powerful characters to a timely story.

She went to New York and visited the sets of “Good Morning America” and “Today” with her production designer John Paino. Taking “so many” photos of the sets and offices, Leder helped set the color palettes for “The Morning Show’s” versions of both — coveting accuracy even over convenience.

“What was surprising was the rooms are really tiny,” Leder said of the real-life studios. “They’re really small, and actually, our sets are really small — a little too small. It was like shooting in a practical location.”

Leder said she had a lot of time with the script before shooting, as the production start date shifted from June to July, then July to August, until they eventually began on November 30, 2018. (“Everything dragged on forever,” she said.) But the director made the most of it: Leder shaped the studio, offices, and hallways to fit her vision of the show.

“In building the set, I had the ability to say, ‘Let’s put the monitors right there because my shot is going to start on them, and I’m going to put [this character] on the floor over here,'” Leder said. 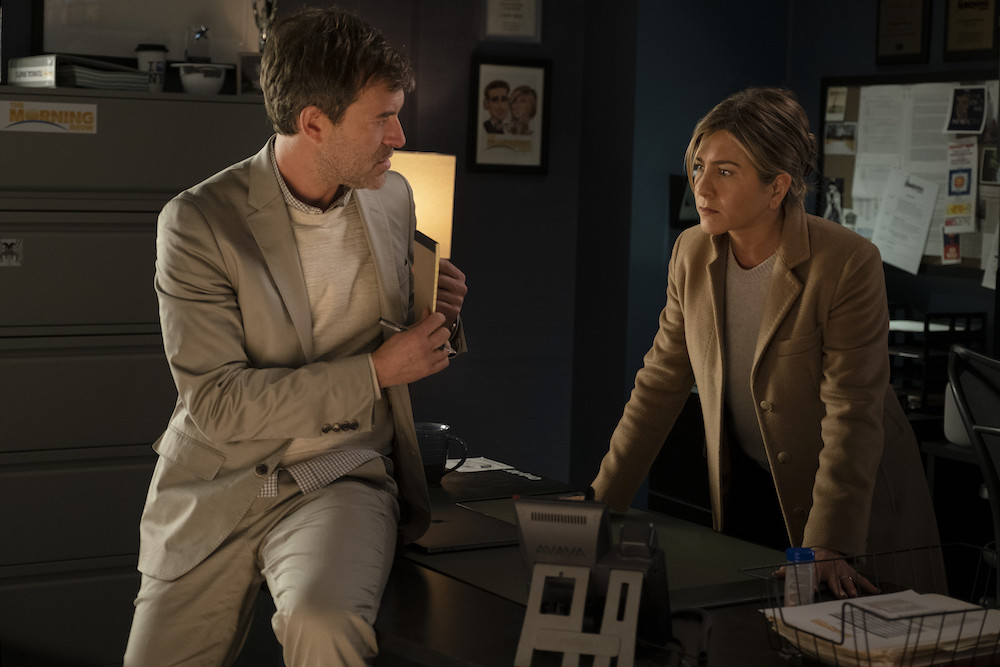 Mark Duplass and Jennifer Aniston in “The Morning Show”

To prepare for the walk-and-talk scenes — Leder helped design the earliest versions of these lengthy one-takes where characters move through sets, sharing a conversation — the director would map out the scene on paper, wait for the construction workers to finish their day’s work, and then take her assistant director, Anne Berger, and director of photography, Michael Grady, onto the unfinished sets to start mapping out the sequences.

“I think that’s also how I work: I plan everything, and then I keep it open,” Leder said. “That comes from experience, just not being afraid to create as we go. New stuff happens and you think of different angles, different shots — ‘Oh, I never saw it from here. Let’s do that. Let’s shoot from the glass.’ — that’s what’s exciting. I know a lot of people plan things and they stick to it. To me, I like to stick to the great stuff, but then I let it go and find even better stuff.”

And she did. Leder’s eye has delivered a vivid start to Season 1, filled with brisk blocking, steady movement, and bright, beautiful colors. Her prepared-but-open process allowed for delightful surprises (like a certain cast member who pops up in the back of one particularly funny walk-and-talk) and a radiant and realistic design for the show-within-the-show. It was a big job, but Leder’s been doing big jobs throughout her career. Between prep, shooting, and post-production, she only finished work two months before “The Morning Show” debuted.

“I’ve only been off six weeks, and I still haven’t recovered,” Leder said. “I go back to work on the 11th of November [for Season 2]. We start shooting in February.”

“The Morning Show” was ordered for two seasons, and Leder describes the project as a limited series. Never one to fold under pressure — on the contrary, Leder thrives there — she’s already bursting with energy for Season 2, which was already picked up by Apple.

“It was a wonderful and excited undertaking. Very complicated, very hard, and awesome,” Leder said in a recent interview. “Our cast is extraordinary. You can’t believe that all this great energy is exploding from the screen.”

So after all that work in Season 1, producing a full season on top of directing three episodes, what’s the plan for Season 2?

“The Morning Show” is streaming now on Apple TV+. New episodes will be released weekly. Apple has ordered Season 2.

This Article is related to: Television and tagged Apple TV Plus, Mimi Leder, The Morning Show