The new series from Paolo Sorrentino returns to HBO in January 2020. 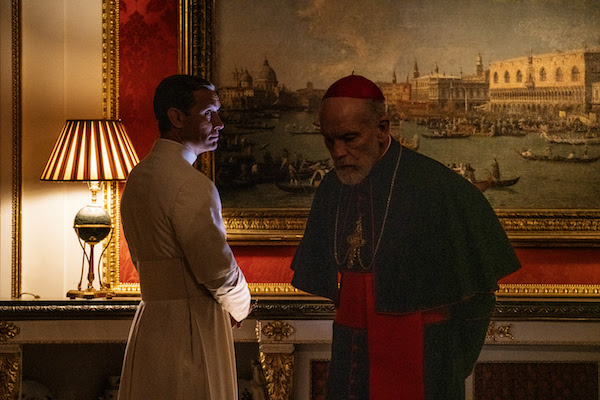 HBO has released the latest trailer for “The New Pope,” a spinoff of 2016’s “The Young Pope” starring Jude Law as Pius XIII, also known as Lenny Belardo, the first American Pope in history. Italian director Paolo Sorrentino (whose 2013 film “The Great Beauty” won the Academy Award for Best Foreign Language Film) also returns, directing all nine episodes of the new season. The limited series is written by Sorrentino with Umberto Contarello and Stefano Bises, and marks Sorrentino’s second limited series set in the world of the modern papacy.

“The New Pope” was well reviewed out of its September premiere at the Venice Film Festival, with The Guardian writing that this new season “is just as rich and ravishing and gloriously enigmatic. It provides another deep dive into the hidden world of the Vatican City, marveling at its mystique with agnostic fervor.”

Watch the new trailer below. The first trailer went viral earlier this year for its brazen shots of Jude Law strolling on the beach in tighty whiteys. “The Young Pope” earned Jude Law a nomination at the 2018 Golden Globes for Best Actor in a Limited Series, but the show had a low profile in the awards conversation despite something of a cult following.

DIrector Sorrentino, meanwhile, recently opened “Loro” in theaters from IFC Films, which offers a colorful history of Silvio Berlusconi (played by the wonderfully expressive Toni Servillo), the Italian media tycoon and politician who served as Prime Minister of Italy and was driven by all manner of appetites.

“The New Pope” is not to be confused with Netflix’s “The Two Popes,” another irreverent look at the papacy, but through the eyes of Jonathan Pryce and Anthony Hopkins, and arriving courtesy of Netflix as one of the year’s most formidable Academy Awards contenders. That’s a lot of pope.

This Article is related to: Television and tagged Jude Law, The New Pope, TV News