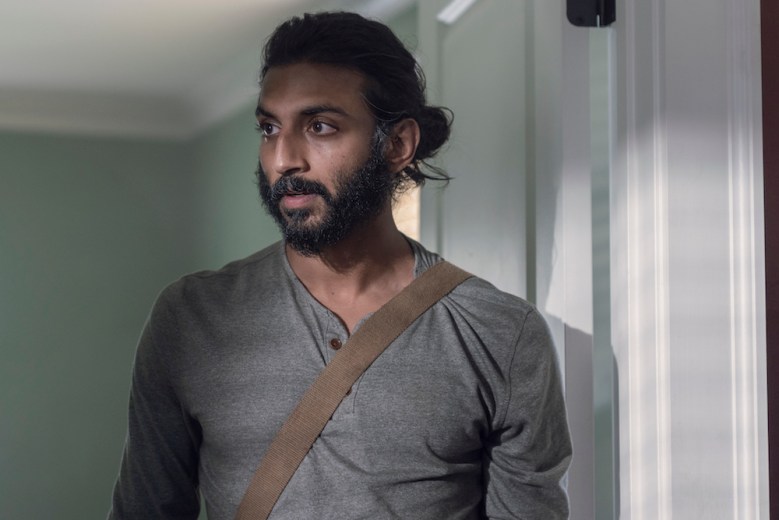 Avi Nash in “The Walking Dead”

Well, that was unexpected.

Siddiq (Avi Nash), still suffering from ever-worsening panic attacks, is able to pull himself together enough to realize that Alexandria’s plague is being caused by tainted water — due to a switched handle in the purification system and not from Gamma’s (Thora Birch) zombie dam, as previously theorized — and since Siddiq’s in charge of the water systems with Eugene (Josh McDermitt) gone, he blames himself. Dante (Juan Javier Cardenas) comes by to give him a pep talk and clicks his tongue in a distinct manner, causing Siddiq to realize that Dante is a Whisperer. In fact, he’s the one who forced Siddiq to watch as Alpha (Samantha Morton) beheaded his friends. Dante figures out Siddiq is onto him, they have a brief scuffle, and Dante strangles Siddiq, presumably to death.

As a story turn, it’s dark as hell, and unlike last year’s “Michonne vs. murder orphans” entry, this twist has been building for some time. It’s hard to imagine a grimmer arc than Siddiq’s this season: He spent all year increasingly tormented by the idea he failed his murdered friends, which led to a spiral of believing he was failing those still living. When he finally realizes that guilt was spurred on by an outside tormentor, he still doesn’t triumph. He simply dies, as his tormentor sobs that he didn’t want this. Now that’s some real horror. It doesn’t do much to discourage the idea that “The Walking Dead” is just a misery mill, and it raises a lot of questions the show will probably struggle to answer, but it’s impossible to deny what an utter gut punch Episode 7 delivers.

I didn’t see the turn with Dante coming (though others online had floated the theory), and the episode pulls a clever trick in obfuscating it. Casting Carol’s Whisperer prisoner with an actor (Tarantino regular James Parks) who’s just recognizable enough so that the audience assumes he might stick around a bit — only for Dante to poison him in short order — is a nice misdirect. Dante’s too late, though. The prisoner lets slip the most vital piece of info he has: The Whisperers think Lydia (Cassady McClincy) is dead.

This piece of info could turn the tide, so naturally Carol (Melissa McBride) blows it immediately, manipulating Lydia into accompanying her on a proof-of-life mission to Whisperer territory which gets derailed when they stumble upon Gamma and Aaron (Ross Marquand). Lydia accuses Carol of manipulating her just like Alpha did, and our heroes’ biggest asset runs off into the woods. It was no fun watching Michonne be an isolationist pill last season, and it’s been just as little fun watching Carol unravel in her quest for vengeance. How many times do we have to watch the main characters learn the same tired lessons?

That’s the downside of “Open Your Eyes”: While the final scene is great, the rest is a typically tepid Season 10 episode. Siddiq’s flashbacks became tiresome ages ago, and they’re laid on extra thick this week. His heart-to-heart with Rosita (who finally notices he’s coming unglued) is a nice showcase for Avi Nash before he’s shown the door, but the other Siddiq scenes are just like all the other ones we’ve gotten this season. He’s overworked and wracked with guilt, we get it. And shouldn’t someone, anyone, have pieced together that the water might have something to do with the stomach bug? That seems like an easy conclusion for even those without medical training to deduce.

This episode also rockets through the Aaron/Gamma subplot, as we find them already in the middle of a tentative friendship. Aaron, to his credit, knows that Gamma’s only there to pump him for information, but he can tell she’s genuinely interested in the communities and probably only needs a little nudge. Alpha can see it, too, and whips Gamma with a switch to get her to re-commit to the cause. It’s interesting how Alpha has expanded her abuse of Lydia to exert control over an entire group of people. It would be nice if the show focused on that a bit more instead of Alpha just randomly murdering underlings every other week, but I’ll take what I can get.

Of course, it’s all for naught the moment Gamma spots Lydia and her world comes crashing down. Gamma was clearly on the fence about the Whisperers before she ever encountered Aaron, and since Lydia showing up is what finally breaks her, you have to wonder why Aaron was involved in this story at all. At least it was brief. Still, with Gamma’s alliances shifting, Lydia on the run, and Dante soon to be found out (hopefully), there’s a lot of intriguing balls in the air for next week’s midseason finale.