From "The Irishman" to "Joker," the term keeps coming up — and the season is just getting started. 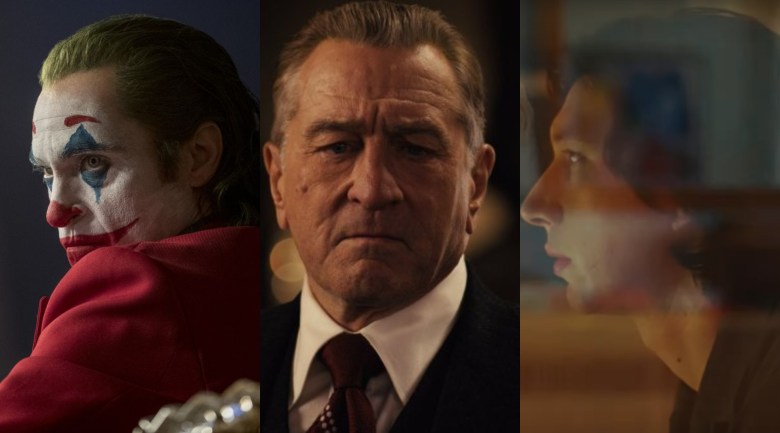 In case there was any doubt that Martin Scorsese’s “The Irishman” centered on bad men with serious issues, producer Jane Rosenthal didn’t mince words in an interview a few days before the premiere: “What you do look at, with something like ‘The Irishman,’ is the toxic masculinity,” she said, “and what happens when someone chooses one family over their own nuclear family.”

She may as well have been addressing all the movies vying for prime awards season attention this fall. More than any Oscar race in recent memory, the top candidates to date settle on fragile men repressing their insecurities with tough-guy shielding, denying themselves the support systems at their disposal.

From the self-destructive path of alleged hit man Frank Sheeran (Robert De Niro) that pits him against his best pal Jimmy Hoffa (Al Pacino) in “The Irishman,” to the vengeful path of outsider Arthur Fleck (Joaquin Phoenix) in “Joker,” through the arrogance of famed “Marriage Story” theater director Charlie Barber (Adam Driver) in recognizing his failures as a husband, this season is overloaded with a lot of troubled dudes facing their comeuppance.

It sounds crass, but welcome to 2019: toxic masculinity is having a moment. However, even as the term has gained traction in recent years — in large part thanks to the blatant misogyny and rage spirals of the 45th U.S. president — its provenance goes back almost three decades.

Psychology professor Shepard Bliss coined “toxic masculinity” as part of the mythopoetic men’s movement in the late 1980s, and worked through a shamanistic process for coaxing men into confronting aspects of their identity that society told them to bottle up. Bliss even hosted retreats for participants with a $200 entry free. “We drum, we chant, we recite poetry,” he told the New Republic in 1990 — but the story also reported a lot of flatulence and men crawling on all fours, presumably to expunge their animalistic instincts. For Bliss, “toxic masculinity” found men obscuring their emotions with icy demeanors that lead to harsh — and at times violent — outbursts. “I use a medical term,” he said, “because I believe that like every sickness, toxic masculinity has an antidote.”

Almost 30 years later, in the wake of #MeToo and the cavalcade of revelations around awful male behavior, Bliss’ notion of finding a cure for toxic masculinity sounds awfully naive — even as his process has been sublimated into narrative form. In “The Irishman,” Sheeran spends much of the movie operating under the assumption that he knows exactly how a man should behave — in a patriarchal, domineering fashion that ultimately alienates his offspring.

Much has been made about paucity of dialogue spoken by Anna Paquin, as Sheeran’s oldest daughter Peggy, who spends a lot of scenes glaring at her distant dad. As a child, she’s traumatized when he beats up a deli worker who bullies her; as an adult, she resents how he keeps his sins private, an act that ensures they remain at constant odds. Paquin speaks only seven words over the course of this three-and-a-half hour opus, but it’s the last five that really sink in: After Sheeran kills Hoffa and broadcasters obsess over the union figure’s disappearance, Sheeran sits in his living room, listening to the reports in silence.

His family doesn’t know what he’s done, but Peggy gets the gist. “Why didn’t you call Jo?,” Peggy asks, referencing Hoffa’s wife. That question triggers the movie’s most powerful moment, when Sheeran picks up the phone and attempts to obscure the awful truth. De Niro gives some of his best acting in years across a single, devastating closeup, as he finally displays the emotions he’s withheld his entire life. It takes Peggy, whose studied gaze epitomizes the movie’s soul, to diagnose Frank’s burden. By then, however, he’s beyond repair — and the somber closing act explores what it means to live within the confines of unresolvable grief. 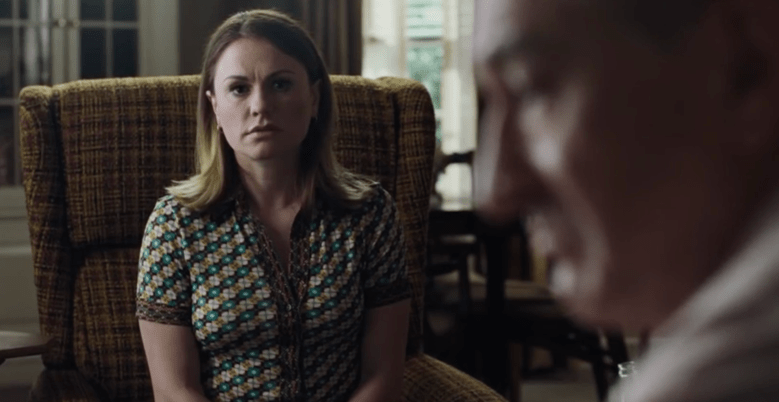 At least Frank eventually tries to make amends. There’s no vindication for Arthur Fleck (Joaquin Phoenix) in “Joker,” perhaps the first mega-blockbuster in film history exclusively fixated on toxic masculinity in every disturbing scene. The jury’s forever out on whether “Joker” actually diagnoses this abused loner or celebrates his corrupt behavior as an incel call to arms, but the movie’s currency as a referendum on toxic masculinity has unshakable power. Phoenix has said that he shared the script with his mother and sister before signing on, a claim that doesn’t expunge the movie of its potential sympathies, but suggests a sensitivity toward their implications.

For this viewer, the murky nature of the message in “Joker” gives it a blunt effectiveness at parsing the psychology of a demented man. Lost in romantic delusions and finding his only solace in bloody revenge, Arthur’s less a credible anti-hero than a symbolic abstraction, like so many popular comic book creations — a nightmarish vision of fury and self-loathing compelled to inflict his fury on the world around him. It’s nice to think that the bad guys always lose, but “Joker” assumes otherwise.

“Marriage Story” provides an alternative to that bitter pill, at least in the context of a saner mind. Charlie Barber spends much of the movie in denial about the way that he has put his own career ambitions ahead of his actress wife Nicole (Scarlett Johansson), who wants to abandon New York in favor of a better life in Los Angeles. Early on, Charlie learns that he’s facing a lost cause when his frumpy lawyer (Alan Alda) suggests his client would do better thinking in terms of what’s best for the couple’s child.

But it isn’t until later in movie, when Charlie’s tensions with his wife finally erupt with a jarring physical outburst, that he melts into a sudden realization of his flaws. It’s a stunning moment, among the best in Driver’s career, distilling the nature of toxic masculinity and all the sensitivities it keeps locked up into a single burst of dramatic energy. (As Spike Lee recently put it when reflecting on Driver’s skills: “Game respects game.”)

The mental armor plaguing all of these characters have precise origin stories. In “The Irishman,” Sheeran’s introverted tendencies reflect his experiences on the battlefield; both Arthur and Charlie suffer pent-up frustrations stemming from abusive childhoods. Unlike the would-be Joker, Charlie finds an outlet for his issues in art and community. However, the validation of fame falls short of addressing his failure to commune with those closest to him. Still, Charlie’s arc comes tinged with an aura of hope; in a group therapy session with these three battered souls, he stands the best chance at salvation.

That emotionally stunted circle might also include faded movie star Rick Dalton (Leonardo DiCaprio) and his faithful stunt man Cliff Booth (Brad Pitt) as they contend with the isolating effect of their tough-guy personas in Quentin Tarantino’s “Once Upon a Time in Hollywood.” The triumphant quality of the movie’s violent finale suggests that the filmmaker sympathizes with their plight by giving them a happy ending on their own terms. However, the most authentic scene in “Hollywood” — and perhaps Tarantino’s filmography as a whole — comes much earlier, when Dalton bursts into tears in the middle of a Western shoot, as he confronts his anxieties over his waning talent in the wake of giving a winning performance. (As Tarantino recently revealed, that scene was improvised by DiCaprio himself, adding yet another layer to the drama.)

These concerns unfold under different circumstances in “Honey Boy,” the Shia LaBeouf-scripted filmic memoir in which the actor literally undergoes therapy while revisiting his contentious relationship with his own abusive dad. Director Alma Ha’rel’s sensitive movie doesn’t exonerate LaBeouf; instead, it proves an effective means of getting inside his head. 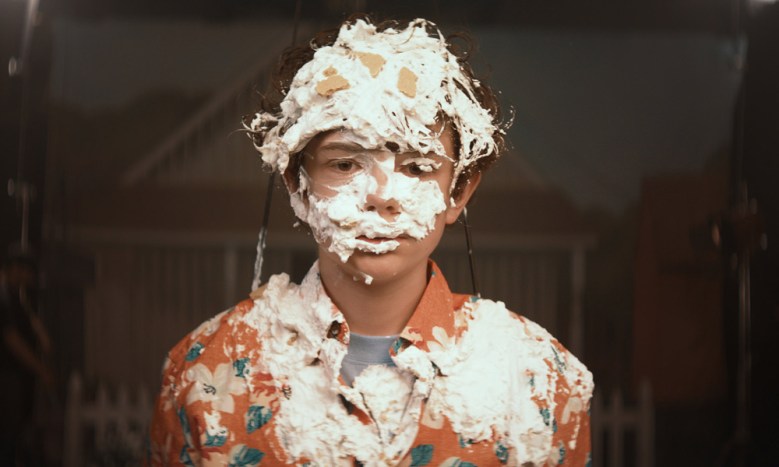 Along similar lines, Kim (Song Kang-ho), the patriarch of Bong Joon Ho’s “Parasite” convinces his impoverished household to engage in a high-stakes con, overtaking the domestic roles in a wealthy family. The man’s hyperbolic scheme is destined to fail, and it’s a spoiler to reveal exactly how it does — but needless to say, no other movie this year does such a remarkable job of illustrating what can happen when one man gets trapped by ambition beyond his control. Kim’s so driven to save his family on his own terms that he drags them all down with him.

So the circle of men at our cinematic therapy session grows a bit wider. Overseeing it all, Fred Rogers (Tom Hanks) would surely know how to sort through their troubles. The wise figure at the center of Marielle Heller’s touching “A Beautiful Day in the Neighborhood” helps guide cynical journalist Lloyd Fogel (Matthew Rhys) to a confrontation with his own parental issues involving his ailing dad (Chris Cooper). Heller’s movie frames the drama as a fictional episode of “Mister Roger’s Neighborhood,” contrasting the innocence of childhood learning with the messiness of a fragile male ego that could really brush up on those lessons about how to confront your emotions.

If these movies all probe toxic masculinity from a male perspective, the season is poised to balance out with some of its most anticipated titles around the corner. Greta Gerwig’s “Little Women” adaptation and “Bombshell,” which features Charlize Theron as Megyn Kelly among other women at the center of the Fox News sexual assault scandals, are both poised to address the other side of the equation. As moviegoers navigate a sea of toxic masculinity, these late-season entrants may deliver a lifeline — or at least the opportunity to widen the cultural frame. They can’t come soon enough.

This Article is related to: Awards and tagged Joker, Marriage Story, Oscars, The Irishman