Tim Blake Nelson delivers a rich, nuanced performance in an episode filled with vital explanations — and even more heart. 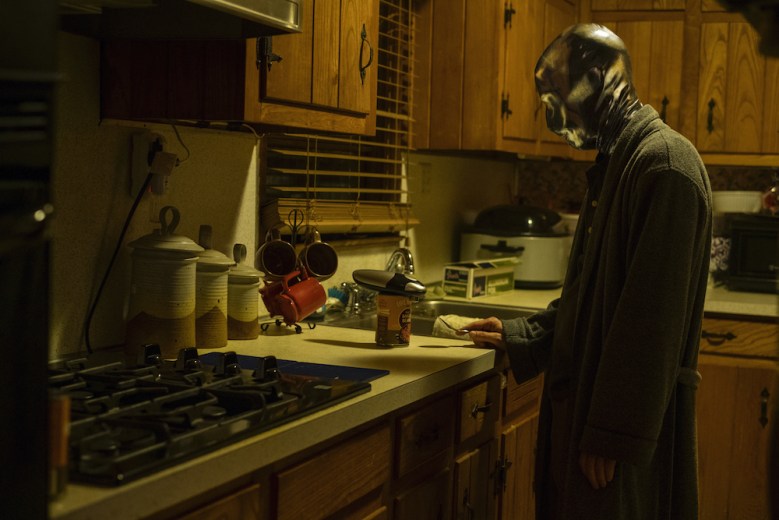 Remember what Agent Laurie Blake (Jean Smart) said last week, about people who wear masks and how they’re driven by pain? Well, she may have been talking to Sister Night (Regina King) at the time, but I believe after sitting down with “Mirror Guy” aka Looking Glass aka Wade Tillman (played by the excellent Tim Blake Nelson), he’d be her first case study toward proving that theory true. In a dense hour devoted to the root of Wade’s pain (and, thus, his alter ego), veteran “Leftovers” scribes Damon Lindelof and Carly Wray guide the audience through a troubling series of revelations, all centered around Wade, yet consequential for everyone in the “Watchmen” universe.

Given that’s the design behind every “Leftovers” episode — using individual trauma to reflect universal concerns — it should come as no surprise that Episode 5 is deeply sad, difficult, and exceptional. (There’s also no doubt this is a “Leftovers” episode told in a “Watchmen” universe, as punctuated by the Sturgill Simpson song used as Wade and the unmasked Seventh Kavalry member hit the bar.) Even by “Watchmen’s” lofty standards, this entry is filled with critical, complicated information on emotional and expositional levels — it’s definitely the episode most dependent on the comic book to help audiences make sense of everything, but anyone can still follow what’s happening. “Little Fear of Lightning” grounds its arc in Wade’s journey, which gives the audience a literal human tether, and further still, really, it’s all based around one question: “What happened?”

Masks On: What We Know

It’s the last thing he shouts in the haunting opening sequence, where a young Wade travels from Oklahoma to New Jersey with a youth ministry in order to save lost souls, but it’s also the question that drives the rest of his life. In their sit-down, Laurie breaks him down with brutal brevity: “You still scared shitless?” she asks, before pushing past his false fronting assuredness. “Once they let you yahoos put masks on, you had an excuse to wrap your entire head in reflective tape” — explaining why he joined the force: for “guaranteed protection from psychic blasts, ergo, you sleep great.”

And we see how right she is when Wade goes home, obsesses over his squid security system, and refuses to go more than a few seconds without shiny protection over his dome. He opens his beans with the mask on; he watches “American Hero Story” with his mask on; he sleeps with his mask on — when he can’t wear his mask, he wears a lined baseball cap so he’s never exposed. He is the Tulsa man who’s living in constant fear; the one Wade claims to see in the screening room, who would never go back to New York, no matter what kind of ad the city’s marketing department cooks up. Calamari? No way. 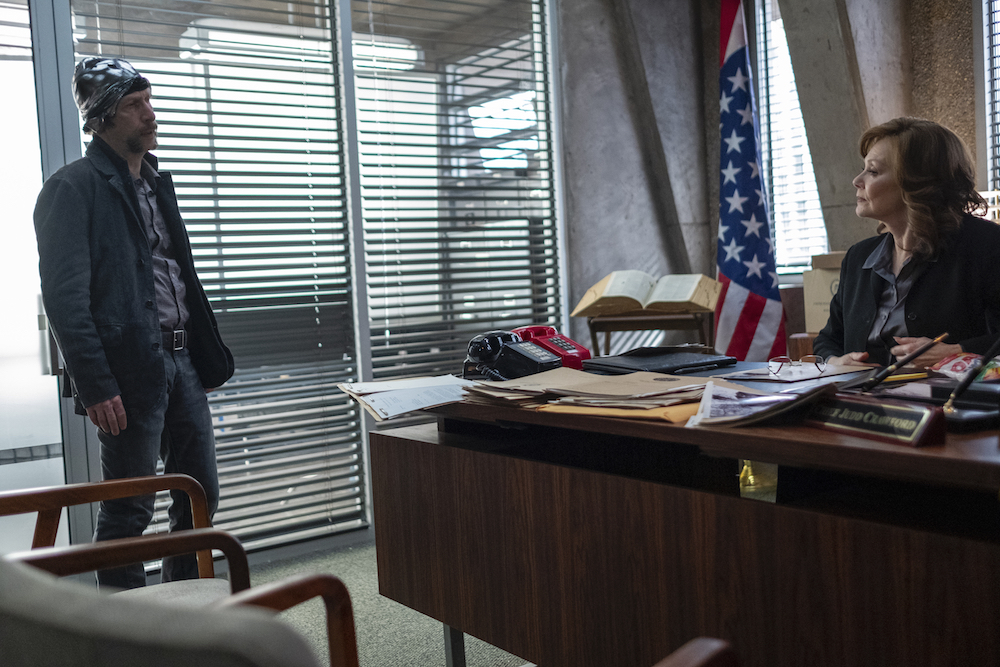 For anyone who complains about “Watchmen” raising too many questions without answering them, “What happened?” is answered in detail before episode’s end — along with more answers you may not have expected so soon. Toward the latter point, Episode 5 tells us a bit more about Captain Crawford (Don Johnson) and his relationship with the Seventh Kavalry. In doing so, it also exposes Senator Keene (James Wolk) as a leader of the Seventh Kavalry. What they’re up to remains a mystery (more on that in a second), but Keene and, supposedly, Crawford’s presence in their ranks is meant to be beneficial — two stately authorities guiding the group toward safety, rather than helping them do more evil.

And that brings us back to the answer: What happened? Comic book readers already know — and were undoubtedly delighted to finally get a shot of the giant squid packed between New York skyscrapers, after Zack Snyder’s otherwise faithful “Watchmen” movie avoided it — but, like Wade parked in front of those many, many TV screens (ones reminiscent of Adrian Veidt’s set up in the comics), those watching at home have no idea: It was all a hoax. There were no aliens from another dimension attacking New York. The squid crashing into New York with a deadly psychic blast was Adrian Veidt’s doing — a mad plan to end the nuclear stand-off between America and Russia by focusing their worries on something else; an alien force they would have to defend against together. While it was, seemingly, insane, Veidt’s plan worked (like so many of his plans, it turns out) — and the government has been keeping up his ruse ever since to keep the peace. Why does it rain squids? It’s not an after-effect of 11/2; it’s a reminder to keep the peace, for fear of a bigger, looming, unknown war.

This information carries consequences for everyone, but Wade also has to reckon with what this blast of truth means for himself, personally. Namely, his whole life was a lie. All his worries were for naught. His mask, his identity, his failed marriage, and more were all driven by one man’s deceptive plot, not an extra-dimensional threat. But, as you can see when he tosses his alarm system in the garbage only to retrieve it seconds later, deep-seeded beliefs can’t be changed so easily. A truth bomb brings out skepticism and retorts just as often as an apology and change of attitude, but Wade make one choice: He puts Angela out of commission. He helps Keene frame her by letting Laurie listen in on their conversation, knowing full well it will incriminate her and put her behind bars — safe from the Seventh Kavalry’s reach. Wade, however, isn’t so lucky. They’re coming for him… but why? 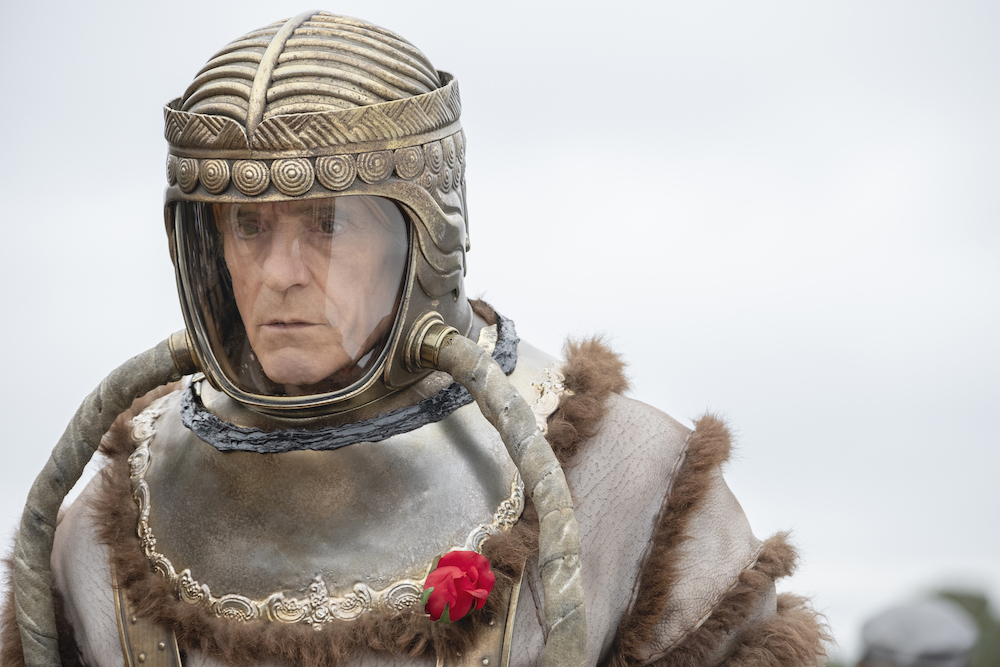 Masks Off: What We Don’t Know

What the hell is going on with Adrian Veidt? (Part V)

Well, we know one thing: He’s not on Earth. From Adrian’s successful excursion into space, it appears he’s been trapped on one of Mars’ moons, and he’s been launching the bodies of his servants into the unprotected atmosphere outside his inhabitable prison in order to plead for help. He’s snapped and contorted their helpless carcasses to spell out a message of his own: “Save me” — well, that’s actually just part of the message. On the edge of the satellite lens that spots his message, and the edge of the frame that reflects it back to us, there’s another letter: “D.” So, considering his proximity to Mars, could the full message read, “Save me Dr. Manhattan”? Perhaps. It could just as easily say, “Save me, damn it!” or “Save me dear President Redford.” Whoever he’s asking for help better come quick: The Game Warden is about to exact his punishment.

What are Will’s pills for?

Wade’s ex-wife tells him they’re “nostalgia,” which she further explains are memories put into pill form — pills that have such been outlawed because they drive the person who takes them mad. Will said they were to help his memory, but what memories are in there? What is he trying to hold onto? And why did he leave them behind, in Angela’s car, presumably for her to find? Did he hope she would sample them? What will happen now that she has? Get ready: Episode 6 is a fucking doozy.

Why did the Seventh Kavalry develop a teleportation device?

What will happen to Wade?

Either Keene wasn’t telling the truth, or he doesn’t have the authority over Seventh Kavalry members that he promised. With an intimidating crew charging his house, Episode 5 finds the perfect closing note. Beyond Wade, we still are dying to know what the Seventh Kavalry are planning, and putting “Mirror Guy” at the center of that question makes it all the more urgent. Before this hour, our attachment to Wade was only as a devout partner to Sister Night. Now he’s one of the most empathetic figures in the series. Watching him pull down his mask after Angela was taken away in handcuffs illustrated the infinite complications of perception. She thinks he betrayed her. He thinks he saved her, but he doesn’t know for sure. Wade is still hiding, but now it’s out of shame, not fear. Is it too late? Tick tock.