Wildfire season is a risky time to debut a comedy about kids who get separated from their parents during a wildfire. 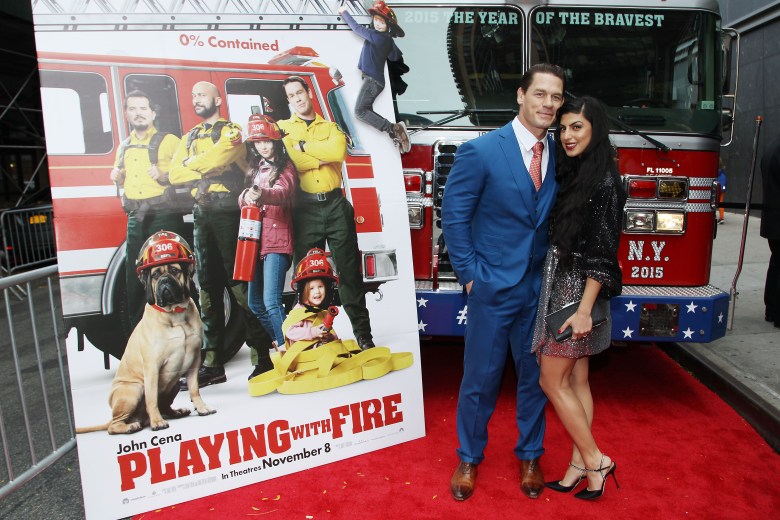 John Cena and Shay Shariatzadeh at the “Playing With Fire” premiere

With 10 wildfires currently burning throughout California, residents have become all too familiar with the concept of containment — a measurement that refers to the perimeter firefighters create around a blaze to prevent its spread. Marketing materials for Paramount’s November 8 firehouse comedy “Playing With Fire” starring John Cena uses the tagline “0% Contained.” Not exactly the association you want for a Nickelodeon-produced family movie.

However, Paramount appears acutely aware of the optics. With a plan for charitable donations and other outreach to real-life firefighters, the studio has gotten ahead of any critical commentary on the matter, most of which has long been planned, a representative said.

Cena plays a straight-laced fire superintendent who heads an elite team of smokejumpers who parachute into blazes. Keegan-Michael Key, John Leguizamo, and Tyler Mane are part of the team who rescue three children (Brianna Hildebrand, Christian Convery, and Finley Rose Slater) in the path of a wildfire. They unwittingly become babysitters to the siblings when they’re unable to locate the children’s parents and find that kids, much like fires, are wild and unpredictable.

While the trailer for “Playing With Fire” suggests that the core of the movie is firefighters-meet-children-hijinks that happen in the safety of the firehouse, its release date is firmly ensconced in California’s fire season.

Cena took to Twitter Monday as the Getty Fire burned homes and prompted mandatory evacuations on the Westside of Los Angeles, announcing that he would donate $500,000 to a first-responder charity: All Paramount needed to do is choose one.

Thank you @JohnCena for your generosity & dedication to our first responders. We've chosen two charities to share your donation: @CAFireFound & the @LAFDFoundation, which provide essential services to the dedicated firefighters who are working tirelessly to keep us safe. https://t.co/E5qljbQy0p

“Paramount is bringing you the movie ‘Playing with Fire and today I asked myself, ‘What can I do?,'” he said. “I have come up with an answer: I want Paramount to do me one favor — pick a charity. Pick a charity that aids our first responders as soon as possible and on behalf of ‘Playing with Fire’ and out of respect to the people I truly believe are heroes, my response will be to immediately donate half-a-million-dollars to that cause.”

Paramount responded about 30 minutes later, suggesting the California Fire Foundation, which offers emotional and financial assistance to families of fallen firefighters, firefighters and their communities, as well as the Los Angeles Fire Department Foundation, the city department’s nonprofit arm.

A Paramount representative said the studio has screened the movie for first responders and their families across the country, is giving away Halloween candy at firehouses in field markets, and will release a featurette next week to celebrate the work of smokejumpers.

This Article is related to: Film and tagged John Cena, Paramount