The network apologized for pulling commercials showing a lesbian wedding, but a movie featuring a same-sex couple would have a greater impact. 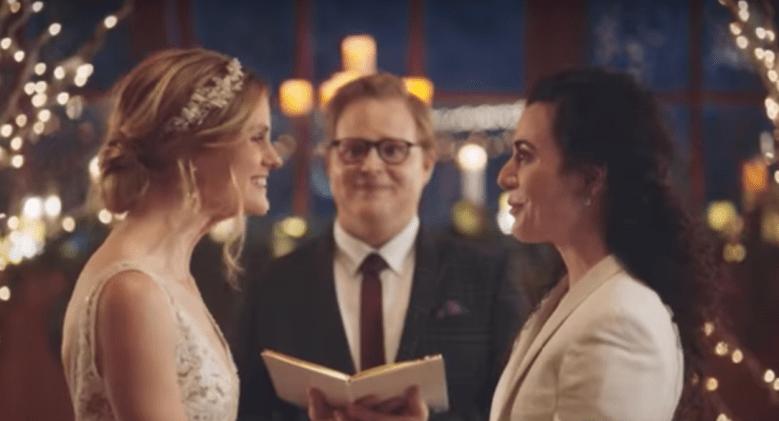 The Hallmark Channel recently came under fire for its decision to pull four commercials from wedding planning company Zola which featured two women kissing. The decision came in response to pressure from conservative group One Million Moms, which called for a boycott of the network, though afterwards Hallmark quickly found itself in even hotter water with the rest of its audience. While the network cut four ads showing the women kissing, it continued to air two that featured a heterosexual couple kissing.

The network, which is owned by Crown Media Family Networks, reversed course on Sunday, reinstating the ads and issuing an apology.  “The Crown Media team has been agonizing over this decision as we’ve seen the hurt it has unintentionally caused,” Hallmark Cards Inc. President Mike Perry said in a statement. “Said simply, they believe this was the wrong decision. Our mission is rooted in helping all people connect, celebrate traditions and be inspired to capture meaningful moments in their lives. Anything that detracts from this purpose is not who we are. We are truly sorry for the hurt and disappointment this has caused.”

But if Hallmark really wants to make an impact and show the LGBTQ community its commitment to inclusivity, it should greenlight an LGBTQ script ASAP.

“The Hallmark Channel’s decision to correct its mistake sends an important message to LGBTQ people and represents a major loss for fringe organizations, like One Million Moms,” GLAAD President Sarah Kate Ellis said. “LGBTQ people are, and will continue to be a part of advertisements and family programming and that will never change.”

Hallmark said it would work with GLAAD to further ensure LGBTQ consumers felt represented: “Across our brand, we will continue to look for ways to be more inclusive and celebrate our differences.”

So what would a more LGBTQ-inclusive Hallmark look like? The company’s greeting card arm already features a robust offering of LGBTQ-friendly holiday cards, even if it makes for somewhat clunky phrasing. (Options include: “To a wonderful daughter and the woman she loves,” and “Loving a man as incredible as you makes me a lucky man.”)

But the Hallmark Channel, famous for its cookie-cutter scripts and cheesy, feel-good romances, has never featured a same-sex couple in a main storyline. The channel made headlines less than a month ago, when The Wrap noticed that of Hallmark’s 40 new original holiday films, none featured an LGBTQ character in a leading role. At the time, Crown Media VP of programming Michele Vicary told The Wrap Hallmark was “looking at pitches for LGBTQ movies,” but acknowledged “there is a lot of work to be done to catch up in that area.”

“Hallmark’s decision was discriminatory and wrong,” said Lauren Sick, who directed all six of the Zola commercial spots in the “No Regrets” campaign. “It was incredibly disappointing. But in the end, they did the right thing by reversing their decision. I’m just hoping that this conversation will contribute to more representation for LGBTQ couples on their channel, and across more media in general.”

After all, Hallmark has perfected its tried-and-true formula — generic, cozy, formulaic — over years, it wouldn’t be hard to simply swap one gender in its pile of un-produced scripts. Better yet, solicit an up-and-coming LGBTQ writer to craft the script, hire an LGBTQ director and cast the movie with LGBTQ actors. In an ideal world, an LGBTQ Hallmark movie would be exactly like every other Hallmark movie, except with queer actors playing the estranged twins who decide to swap lives.

“I’ve heard Hallmark has a pretty good track record of doing right by the LGBTQ community,” Sick added. “I suspect that there is some sincere remorse there, and I truly hope that they fulfill their public promise to be more inclusive moving forward.”

This Article is related to: Television and tagged Hallmark Channel, LGBT