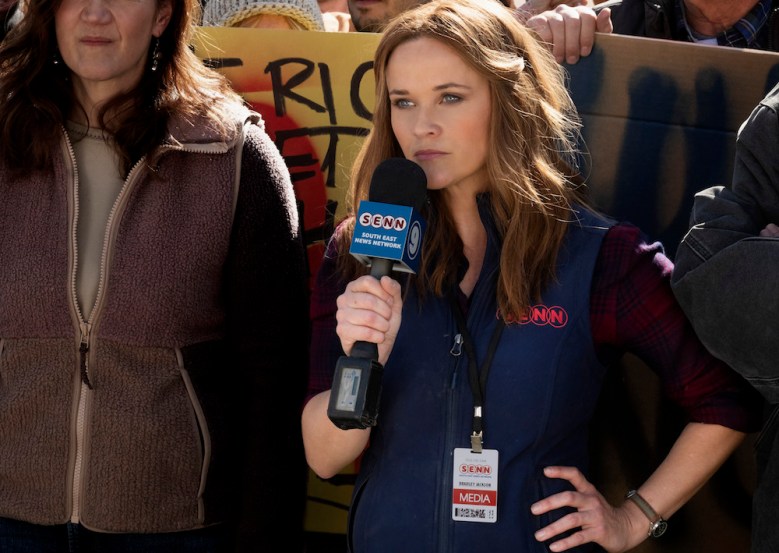 Reese Witherspoon in “The Morning Show”

This story has been updated with a statement from Reese Witherspoon.

Hello Sunshine, which Witherspoon founded in 2016, has quickly made a name for itself in prestige television. The studio says it is focused on telling stories and creating content that celebrates women, and, so far, Hollywood has recognized its efforts; “Big Little Lies’”  three Golden Globe nominations Monday come on top of the five the show received last year. (The series was ineligible for this year’s Emmys as HBO likely pushed its Season 2 release date to avoid competing with its own “Game of Thrones”, but the previous year the show earned eight Emmys.)

As for “The Morning Show,” the Apple TV+ tentpole scored three Golden Globe nominations Monday. The recognition could help Apple TV+ and Hello Sunshine maintain their momentum and keep “The Morning Show,” which has already announced a Season 2, in the cultural zeitgeist, especially if voters decide to turn those nominations into awards in January.

“When I’m awakened by shaking and my husband’s much too loud and excited voice at 5 AM, it must be a good day,” Witherspoon said in a statement. “I’ve been blessed to work with talented actors and creative teams throughout my career, but this year really takes the cake because I had the honor of working with two amazing groups of people on both ‘Big Little Lies’ and ‘The Morning Show!’ I can’t say enough about each actor, writer, producer creator and member of the hardworking crews that brought these stories to life. Acting is my first love and it was always my dream when I began producing and started Hello Sunshine that we would create smart and compelling stories with strong female voices at the center, but to have people actually enjoy the work we do is truly all I could have hoped for! I’m grateful to the HFPA and to my partners HBO and Apple, David E. Kelly and Kerry Ehrin, Nicole, Laura, Shailene, Zoe, Meryl, Jen, Steve, Billy, Mark, Gugu, Karen, and everyone who had a hand in bringing ‘Big Little Lies’ and ‘The Morning Show’ to life!”

And while the Hello Sunshine team has reason to celebrate, the Golden Globe nominations were especially kind to its distribution partner HBO. Monday’s announcements reaffirmed HBO’s hot streak, as the television studio received 11 Golden Globe nominations, far more than any of its peers; not even the Golden Globes’ snubbing of the divisive Season 8 of “Game of Thrones” slowed the studio down. (Only Kit Harington received a nomination on behalf of the show, in the Drama TV Series acting category.)

As new streaming services enter the market, it has become increasingly important for large entertainment companies to invest in original content. HBO, which received nominations for “Chernobyl,” “Barry,” “Big Little Lies,” and “Catherine the Great,” excels at this, and the power players behind events such as the Golden Globes and Emmys have taken note. The in-house success also bodes well for WarnerMedia’s upcoming HBO Max streaming service, which is slated to launch in May.