In 1975, Little was acquitted for murder after dramatic efforts by the Black Panther Party. Now, new footage is bringing that historical footnote back to the spotlight. 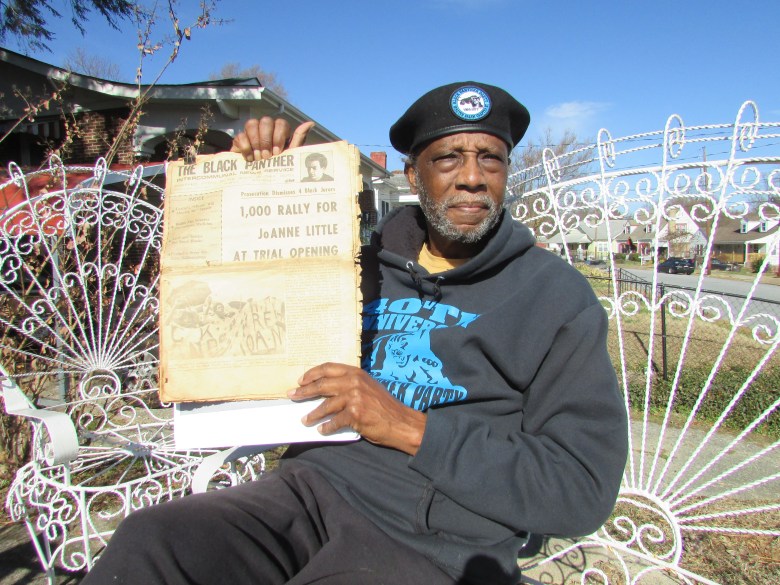 The sled-like American cars floating down the streets of downtown Raleigh, N.C. in the dazzling sunlight give the era away, as do the hairstyles of the protesters picketing outside the courthouse — young, black men and women wearing Afros, white men and women with long hair.

It was August 1975, and Joan Little was about to be acquitted of first-degree murder.

The silent video footage shot by Duane Jackson, a volunteer with the Winston-Salem Black Panther Party, chronicles the multiracial movement to support Little, as protesters picketed outside the courthouse during her trial and after her release. It has been newly unearthed and screened in Winston-Salem for the first time last month.

Little had been serving a sentence for larceny in the Beaufort County jail when her white jailer, Clarence Alligood, was found stabbed to death with an ice pick, his pants down at his ankles and semen on his leg. She fled the jail, and later hid under a mattress in a liquor house before surrendering. “In 1975, a jury of seven white and five blacks found her not guilty by reason of self-defense,” said Larry Little (no relation), who championed her cause as the founder of the Winston-Salem Black Panther Party. “The first time in the history of the United States where a black woman had killed a white man who was raping her, and was found not guilty.”

The trial of Joan Little was an international sensation, attracting national network news coverage and a documentary film crew from Switzerland, and inspiring a book by author James Reston Jr. The black power and feminist activist Angela Davis was among the prominent figures who rallied to Little’s side. Bernice Johnson Reagon of Sweet Honey in the Rock wrote a song in her honor.

Despite the absence of audio, Jackson’s footage captures the exuberance and militancy of the movement, as well as the strong bonds of an interracial alliance forged around her case through a fusion of black power, feminist and prisoner rights that seemed pregnant with radical possibility.

Jackson, who today drives a shuttle bus for Emory University in Atlanta, shot the video on Super 8.

“I was just doing it to capture what was going on,” Jackson said in a recent interview. “I wasn’t on assignment or anything. It was more or less a hobby.”
In Jackson’s video, black women wearing supple Afros file down a sidewalk outside the courthouse carrying placards reading, “Joan Is Our Sister,” and “Self-Defense Is Not a Crime.”

The footage was screened in late October at Winston-Salem State University during the 50th anniversary commemoration activities for the Winston-Salem Black Panther Party.

Movement leaders have recognized the significance of the footage since it was made. Larry Little has been pestering Jackson for it. And Jackson said that Ben Chavis, the former executive director of the NAACP, asked him about another clip from a 1978 March on Washington when he visited Winston-Salem for the National Black Theatre Festival.

Following his 1989 divorce, Jackson left the video in metal cannisters in the basement of his ex-wife’s house in Winston-Salem, Jackson said.
Last fall, when Jackson’s ex-wife was preparing for major renovations on the house, Jackson said his stepson discovered the footage in a closet.

During the sole screening of the footage during the recent 50th anniversary commemoration events for the founding of the Winston-Salem Black Panther Party, Larry Little told the audience that the rapper and actor Common enlisted filmmaker Nelson George to reach out to him after they kept hearing his name come up as someone who had been active in Joan Little’s case.

“Common is doing a film on what happens to wrongfully incarcerated women,” Larry Little said. “He’s interested in telling the story of Joan Little.” (Representatives for Common did not respond to requests to comment on the claim, and Nelson declined to comment at this time.)

Jackson’s footage has an intimate, home-movie quality, but it also displays his eye for detail and nimble camerawork that gives a dynamic sense of action as various luminaries and movement figures pass through the frame. During scenes of picket lines, press conferences, bus trips and hotel rooms, the easy smiles on the subjects’ faces reveal their familiarity with the filmmaker. He’s one of them.

During the screening at Winston-Salem State University on Oct. 23, Larry Little narrated.

Outside the Raleigh courthouse, protesters pumped their fists in the air and chanted.

“Look at this,” he marveled. “Black and white women coming together to prove the point that a black woman has the right to self-defense.”

One scene shows Joan Little emerging from the courthouse after her acquittal. Supporters and reporters swarm around her, and her bodyguard whisks her into a waiting car. The crowd was singing the song “Oh Happy Day” by the Edwin Hawkins Singers, by Larry Little’s recollection.

Another scene shows Joan Little seated next to Karen Galloway, her attorney, who would later become a district court judge in Durham County. The two black women answer a question, then glance at each other and share an eyeroll. Later, Joan Little emerges from an office building with a demure smile and gives a modest black power salute.

Jackson’s footage, which totals about 45 minutes, also shows how Joan Little enthusiastically joined other campaigns for social justice that paralleled her own case. A 1978 march in Washington, DC to protest the conviction of the Wilmington 10 shows Joan Little with Larry Little and Angela Davis. The Wilmington 10 were nine men and a woman who were wrongfully convicted of arson and conspiracy during a period a racial strife in Wilmington, N.C. Amnesty International took up their case, and the Soviet Union cited it to deflect U.S. criticism of its political repression. In 2012, Gov. Beverly Perdue issued pardons of innocence to all 10 defendants.

Jackson’s footage shows Larry Little leading a chant at the rally for the Wilmington 10 and jabbing his finger in the air. Joan Little enthusiastically joins him, hugging him from the side.

Joan Little largely disappeared from public view after a 1989 arrest in New Jersey, reportedly for driving a car with a stolen license plate.

After the screening of Jackson’s footage in Winston-Salem on Oct. 23, Martha Wood, a former Winston-Salem mayor, asked what happened to her.

“She’s in the New York area,” Larry Little responded. “People are trying — Common is trying to contact her because they want to do this. And she just has some issues. She got lost. But I think they’re making a big effort to get her. Because they want to do something on this. That’s all I can tell you at this point.”

This Article is related to: Film and tagged Black Panther Party, Joan Little