Jake Kasdan's star-packed sequel earns another life by amping up the emotion and adding in one hundred percent more The-Rock-playing-Danny-DeVito. 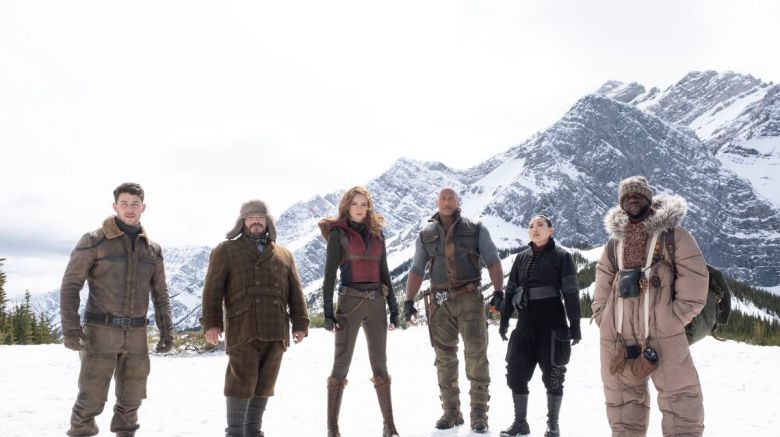 It’s a concept as strange as it was inevitable: a big-budget reboot of a beloved kids’ film that centered on the lo-fi charms (and unexpected terror) of a whimsical board game with a mind of its own. When Sony opted to craft a new take on Joe Johnston’s creative adaptation of Chris Van Allsburg’s book “Jumanji” back in 2017, it seemed like another silly remake destined for the cinematic scrap heap. Taking the ruminative and often freaky Robin Williams-starring fantasy and turning in into a video game movie starring Dwayne Johnson, Kevin Hart, Karen Gillan, Nick Jonas, and Jack Black? It sounded like Hollywood’s reboot machine was on the fritz, kicking out random ideas on a whim.

And yet Jake Kasdan’s late December release “Jumanji: Welcome to the Jungle” subverted those expectations, offering up a funny and self-reflective spin on both reboots and video game movies, bolstered by a plucky (and very funny) cast of big stars. Kasdan and company are all back for “Jumanji: The Next Level,” which amps up the star power by going in the opposite direction that most other video game movies would choose: First off, it finds Danny DeVito and Danny Glover in key roles, then uses the Hollywood legends to build an entire subplot about how terrible it is to grow old.

While Kasdan’s newest entry into the burgeoning franchise (again joined by returning writers Jeff Pinkner and Scott Rosenberg) toys with some compelling ideas early on — it sucks to grow old, and here’s what happens after all the exciting moments in life pass you by — “The Next Level” eventually gives itself over to bigger, sillier gags. Still, it’s a fitting followup, and while not as original as its predecessors, makes a strong claim for the series to keep earning extra lives.

Kasdan’s first film didn’t try to fully ape Johnston’s creation, instead building off a thrilling idea at its core: What if a magical game appeared in your life, and literally sucked you inside of it? (Yes, “Tron” got there first, but not in such crowdpleasing terms.) While Johnston’s film pondered the more melancholy aspects of that idea (Williams’ character is stuck inside the immersive jungle game for entire decades, and goes nutty in the process), Kasdan and coterie of screenwriters mined the “Jumanji” mythos for something more fun, contemporary, and teen-friendly. (If you’re keeping score, yes, DeVito and Glover and their old-age ennui are now also for the teens.)

The result was a winner — a foursome of unlikely high schoolers (shades of “Breakfast Club” built right in) get pulled inside the game (now an old-school Nintendo-esque creation) and are forced to fight for their lives in the guise of some wacky avatars. The shy geek is now Dwayne Johnson! The shy lady geek is now Karen Gillan! The big football star is the diminutive Kevin Hart! The airhead queen bee is Jack Black! “Jumanji: Welcome to the Jungle” took all the tropes and tricks of both reboots and video game movie culture and ran with them, gifting Sony with a massive hit in the waning days of its fiscal year. (It even managed to hold its own against “Star Wars: The Last Jedi” at the box office.)  Of course it would breed a sequel, one beholden to overcoming the same concepts the first film was mostly able to dispatch with, if not quite skill, plenty of humor and hammy winks to the audience.

When “Jumanji: Welcome to the Jungle” ended, the core foursome — Alex Wolff as the cautious Spencer, Morgan Turner as the reserved Martha, Ser’Darius Blain as football star Fridge, and Madison Iseman as the bubbly Bethany — had defeated the game, been inspired by their off-kilter avatars, and bonded intensely in the process. (They even saved Colin-Hanks-as-Nick-Jonas along the way, adding yet another member to their unlikely team of champions.) It was a tidy ending, but Kasdan’s sequel dares to ponder what happens after the thrills are gone. The group has stayed close, but Spencer is struggling to give up his nostalgia for the old days, leading him to conclude that the best way to get his mojo back is to return to the game, to once again become Johnson’s dreamy Dr. Bravestone, and recapture the swagger and confidence one trip inside a video game already gave him. 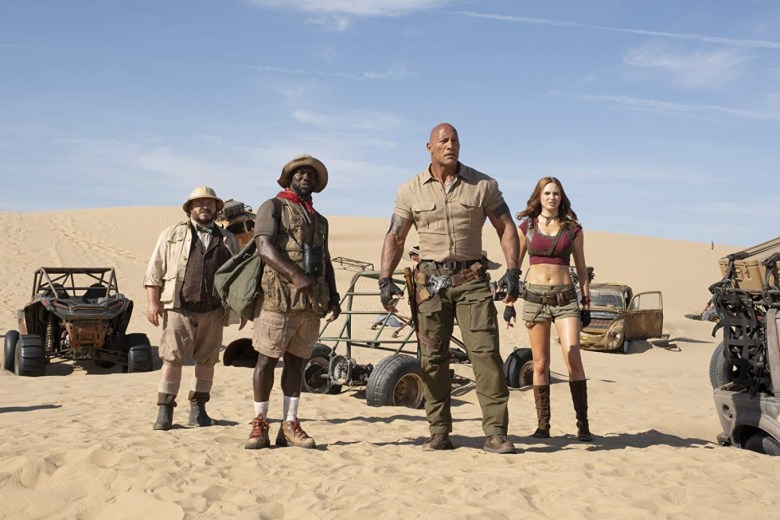 He doesn’t go back alone. While the mechanics of Jumanji the game are fuzzier than ever (this time, you can even play as a horse), those kinks are pushed aside soon enough as “Jumanji: The Next Level” queues up its newest batch of players. If “Welcome to the Jungle” liked having mismatched pals trouncing through the jungle, “The Next Level” adores throwing disparate weirdos into one strange video game stew. If nothing else, at some point in the film’s creation, someone hit upon the idea that “Dwayne Johnson can play Danny DeVito as a crotchety grandpa with a bum hip” and ran with it, and who can possibly blame them? (More interesting, however, is Hart’s uncanny ability to embody Glover’s ponderous Milo with something approaching actual pathos.)

Despite sprucing up the game itself with an eponymous new level — out of the jungle, and into a limp, somewhat medieval plot about a mean old baddie (“Game of Thrones” star Rory McCann) who has stolen a magic stone from some underdeveloped villagers — the sequel doesn’t try to pump up the proceedings too much. Instead, Kasdan and his cast lean more into the wackiness of body-swapping, but the movie is overwhelmed by its busy cast that even a talent like Awkwafina struggles to stand out. (Her DeVito impersonation is more inspired than Johnson’s, but she’s often relegated to jokey asides.) One new wrinkle allows the cast to continue swapping avatars even inside the game, but this occasionally leads to some queasy switcheroos that lean on cheap jokes about race and gender identity, ruining the potential for the concept to have more sophisticated implications.

Zinging from one mission to the next, “The Next Level” doesn’t try to subvert the narrative structure of the video game movie, as it hopscotches from sequence to sequence, layering new drama and characters into the mix with each twist. Less successful are a handful of cuts back to “the real world,” where one original member of the group has been left behind and scrambles to save her cohorts. The fun remains inside the game, and any ventures outside of it aren’t worth either the hassle or the low-key confusion they might inspire from some audiences. (Anyone who doesn’t remember who the hell Colin Hanks plays within this mythos will be very confused at least the last half of the time.)

Eventually, the craziest of punchlines wear thin (the first 10 minutes of Johnson playing DeVito is wonderful, but even that has its hard limits). “The Next Level” attempts to find a balance between winking jokes about video gameplay and the price of immortality (no, really), settling back into the charm of the film it’s tasked with following up. It’s not the most original kind of magic, but there’s potency there, more than enough to keep audiences hanging around for at least one more round.

Sony will release “Jumanji: The Next Level” in theaters on Friday, December 13.

This Article is related to: Film, Reviews and tagged Dwayne Johnson, Jake Kasdan, Jumanji: The Next Level, Reviews