Amy March has long been derided as the silliest sister, but aided by Greta Gerwig's big ideas (and a speech from Meryl Streep), the actress tells IndieWire how she made Amy March into something new. 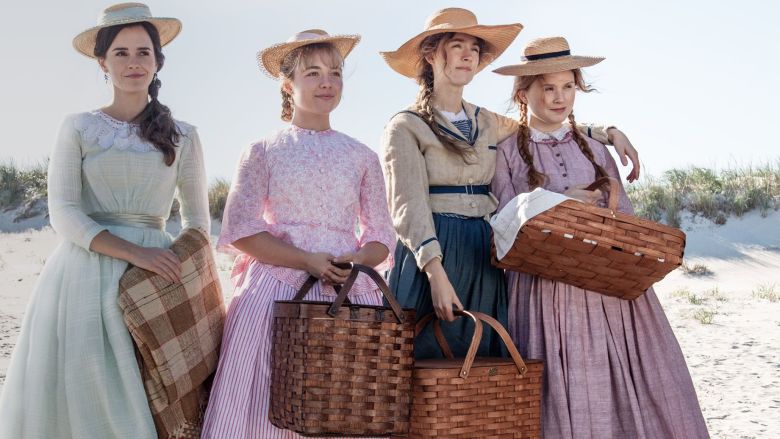 “Little Women” drew its battle lines in 1868, when Louisa May Alcott lovingly turned her own family and childhood into what would become her signature novel. Alcott surrogate Jo is the book’s primary heroine, an ambitious young writer desperate to make her own way in the world. Oldest sister Meg has more traditional ideas about how she’d like to spend her life, while middle sister Beth is dedicated to caring for others (just like their angelic mom Marmee) and loving her family as best she can for as long as she can.

And then there’s Amy. The baby of the March brood has long been viewed as a flighty, spoiled young thing who makes off with some of Jo’s most beloved possessions (a trip to Europe, classical arts training, first love Laurie). While she’s been played by many gifted actresses over the years — including a memorable turn by Kirsten Dunst in Gillian Armstrong’s 1994 version and, most recently, by Kathryn Newton in the 2017 PBS miniseries — she’s remained a particularly tough nut to crack.

Thanks to Greta Gerwig’s revelatory “Little Women,” that’s all changed. With another winning performance from Florence Pugh, the “Midsommar” and “Lady Macbeth” star who seems destined to earn the “breakout” title in every film she stars in, we finally have a course correction on decades of Amy animosity.

“I remember when I first told my friends that I was playing Amy, they were like, ‘Oh, that’s the one I hate,’ which is fine, because that’s the only thing that we’ve known her for,” said Pugh in a recent interview with IndieWire. “We haven’t given her drive. We’ve never seen her with creativity. She’s never had to argue as to why she needs to marry rich.” The actress, however, was intrigued about playing someone so many people have long “love-slashed-hate.”

Pugh said Gerwig had big ideas about Amy from the start. “When I first met her, she was like, ‘I really want Amy to be more. I want her to be more than just the pretty young sister who’s a brat who burns the book and gets the guy,'” Pugh said. “That’s what people really know her as. It’s so easy to appreciate and adore Jo because she represents everything that we want to be as people. We want to be headstrong, we want to be stubborn, we want to know what’s right, we want to earn our own money, and we want to be the first woman that does that.”

When Alcott’s book opens, Amy is just 12 years old. Pugh was 22 when she played the character, but she was able to tap into Amy’s spirit in a way that informs the adult she becomes over the course of the film.

Pugh began shooting “Little Women” after playing another instant-classic character who doesn’t quite know how to give voice to her emotions in Ari Aster’s sun-drenched horror outing “Midsommar.” And, yes, the characters are very different, but Pugh sees them in relation to each other. 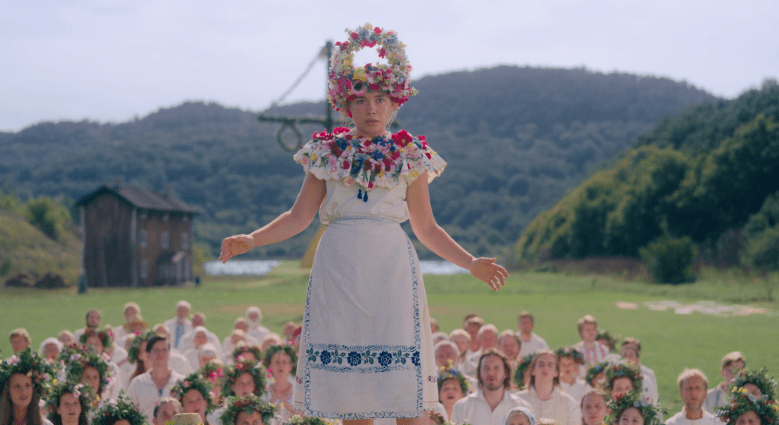 “I did ‘Midsommar,’ and I had a wonderful time doing that, but it was obviously a stressful film to shoot,” she said. “It was just one of those beasts that took it out of you. I went straight onto ‘Little Women,’ which I’m so glad about, because it meant that I could just be this child for three months. I’ve always said that Amy was my therapy after that film. I didn’t really think about what I’d just been doing, when ‘Midsommar’ came out, and I watched it for the first time, I was like, ‘Oh, that’s why I’ve been sad. That’s why I’ve been sad for a year.'”

As her star has risen, Pugh has been forced to jump from project to project with little lag time. Scheduling was so tight between “Midsommar” and “Little Women” that she had to miss the early weeks of rehearsal on Gerwig’s film, showing up fresh off Aster’s grief-stricken cult feature. Pugh says one of her favorite things about her work is bonding with a new “family” on each project, and “Little Women” seemed like the kind of thing that would only really work if she and co-stars Saoirse Ronan, Emma Watson, and Eliza Scanlen became like a family.

“So, I arrive late,” she said with a laugh. “They’d already done about two, three weeks of rehearsal. I missed that and it was like, ‘Oh, God, what if they’re already best friends, and I’m like the outsider?’ I show up, ‘Hey, two weeks late. Just been killing my boyfriend in a temple!’ Two days later, we started filming, and I just remember it being very normal, and all very happy, and almost like I hadn’t missed a day.”

The bonding was immediate, and Pugh says the production fostered a “natural sisterhood” between the group. So too did Gerwig’s directing style, which required everyone to know all their lines from the jump, all the better to elevate the layered and talky script.

“You needed to know [the lines] backwards, forwards,” she said. “You need to be able to ping off one another. I think having that standard there made us all come every day with ‘A’ game because there wasn’t any time to slack. You instantly click with one another, and you’re instantly creating the same thing together. Not only does it boost morale, but it keeps everyone on the same page.”

Gerwig herself went off the page — well, Alcott’s page — a few times during the course of crafting her sophomore film. As Jo hacks away at her writing career in New York City, a blossoming Amy is picked to accompany the girls’ fearsome Aunt March (Meryl Streep) on a trip to Paris. It’s there that she continues to develop her own artistic aspirations, grapples with the possibility of a marriage to a rich gentleman, and is reunited with Timothee Chalamet’s Laurie, the March family friend she’s long adored.

Gerwig spends significant time with Amy during these formative experiences, a break from Alcott’s novel, and the result is a deeper exploration of Amy that Pugh beautifully embodies. Most importantly, it gives her a new voice and perspective. In a turning point during the film’s final act, a conflicted Amy wrestles with the realization that her art is not going to pay the bills, and the best course of action for her is to marry rich. It’s not silly; it’s terribly, painfully realistic. 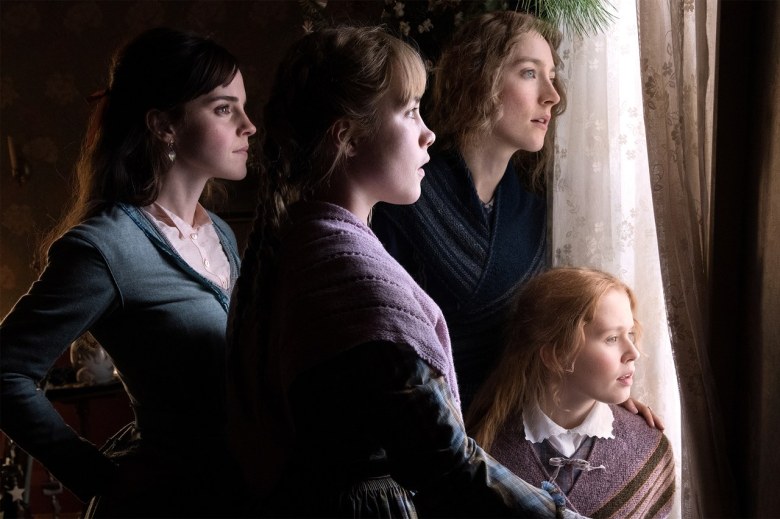 “As a woman, there was one clear way of having a safe life and that was if you have the dresses and you have the looks, then guess what? You should try and marry rich because that’s going to be the safest option,” Pugh said. “Your children are going to be fine, and you’re going to have a nice life. I think Greta just gave Amy the opportunity to express that. You couldn’t just earn your own money and be a painter. That’s not how it happened. What she is doing was the most realistic and most wisest thing that a woman in that era could have done.”

Amy’s realizations culminate in a show-stopping speech she makes to Laurie, who is both eager to make Amy his own and dismayed that she seems to think marriage is the only way for her pursue a comfortable life. Thank Meryl Streep for pushing Gerwig to write such a pointed, eloquent monologue for Pugh, who infuses it with both rage and hard-won acceptance.

“Apparently Meryl told Greta, ‘What you need to put in this film is that women don’t own anything. They don’t even own their children, and if they had children they would belong to their husband,'” Pugh said. “For everyone to realize just how bleak it was, and just how unfair it was, instantly gives Amy the right to want to marry rich in a nanosecond.”

Pugh said that the original scene was written as “one of her biggest scenes,” but Gerwig added the speech just before filming.

After “Little Women,” Pugh shot Cate Shortland’s “Black Widow” spinoff opposite Scarlett Johansson. In its own way, Pugh said, the MCU film is driven by many of the same elements that fuel “Little Women.”

“Cate was so good at being so vigilant about keeping this story raw and painful,” she said. “It’s about emotions, and it’s about these broken girls trying to come back together again, and trying to fix something that happened. It’s about fixing yourself, and how you do that. As an idea for a Marvel film, and as a young woman, it’s like, ‘Oh, my God, this is amazing.’ Young women are going to see this, and they’re going to watch Scarlett in her element, and they’re going to watch this storyline, and that’s only a positive thing.”

Reactions to the film’s first trailer have been largely positive, and even Pugh confesses to a certain amount of relief. “As an actor, when you make a film, people can say what it’s going to look like, but until you see it, you have no idea if people are trying to create something else,” she said. “When I watched just the fighting, the way that it’s so gritty, it’s so a Bourne movie, Jason Bourne! Watching it was cool, and I did like a little fist pump. I got to watch the Black Widow herself in action.” 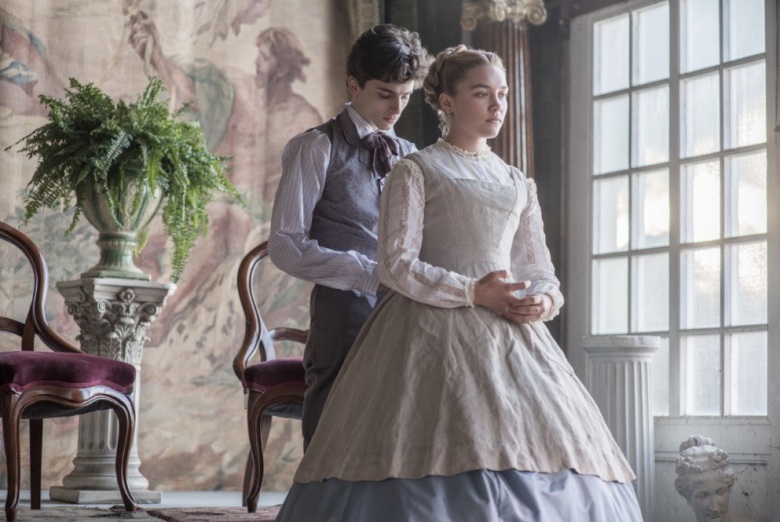 Pugh said her “Black Widow” family was just as closeknit as the “Little Women” coven. She joked that she and co-star David Harbour have the kind of friendship that saw her picking his nose “most of the time.” That kind of wacky confession shouldn’t surprise fans who follow Pugh on social media. On her Instagram account, she shares photos and videos of everything from her getting ready for press outings to dancing in her garage. It’s not a glossy persona, but it is a charming one.

“Social media is so weird, and I think we’ve forgotten that sharing only specific parts of your life is the oddest thing,” Pugh said. “It is the number-one reason as to why so many teenagers are depressed, and I am fully aware of that because, guess what? It makes me depressed. So, if it makes me depressed, then what is it doing to kids who are just normal, regular kids? Having a younger sister that grew up in that, I’m so cautious of what it’s doing to her, and how it doesn’t end now when she leaves school.”

Pugh doesn’t throw around words like “platform” or “reach,” but it’s clear she understands her growing influence and wants to level it in the best way possible.

She isn’t quick to paint herself as an “it girl,” no matter how many other people would like to tag with her the moniker. She’s focused on the work, and if that means more people are seeing it, sure, call her an it girl.

“Being an ‘it girl’ means different things to different people at different times in your life for different films that you do,” she said. “The way that I’ve described it in my head is, ‘Oh, a certain amount of people have really responded to the work that you’ve done, and they don’t know how to sum it up, so they’re going to call you the it girl.’ People are seeing me, and people are feeling things about the work that I’m doing, and as an actor that’s one of the best feelings ever. That’s what we all strive for.”

This Article is related to: Awards and tagged Consider This, Direct, Florence Pugh, Interviews, Little Women