This time, the multi-hyphenate was just on hosting duty, with DaBaby as musical guest. 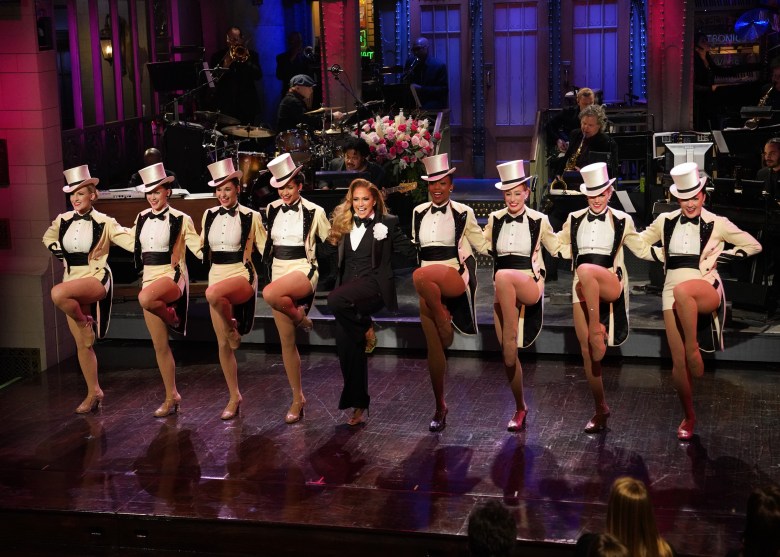 After a brief break for Thanksgiving, “Saturday Night Live” is back with another returning host, Jennifer Lopez. She hosted “SNL” back in 2001 (providing a classic Gemini’s Twin sketch where she played “Lady Speed Stick”) and then again back in 2010 (an episode with one of the three “Hollywood Dish” sketches). But this is the first episode she’s hosted where she has not also been musical guest, despite an upcoming album and Super Bowl halftime performance, on top of all the well-deserved awards buzz for “Hustlers.”

It was hard to think of anything better than the tuxedo Jennifer Lopez wore for her opening monologue — and then she did a reveal of her wearing the iconic green Versace dress from the 2000 Grammys. (She rocked the dress a couple of months ago at the Versace fashion show too, so this isn’t even the first time she’s worn it again since then.)

It’s also worth noting that 50-year-old Lopez — and keep in mind, her being 50 and looking the way she does was an integral component of the monologue — had a moment dancing with the Rockettes, because compare that to Molly Shannon’s notoriously 50-year-old character, Sally O’Malley, and her audition for the Rockettes. Lopez clearly also likes to shimmy, kick, and stretch, but it’s… Well, it’s different when she does it.

It’s easy to say that this episode was dedicated to saying, “Look how good J.Lo looks at 50!” The episode absolutely did do that, but it also did so within the context of established sketches and sketch formats in this current form of “SNL.” The “Surprise Home Makeover” sketch is a sequel to the “Live Report” sketch from Mikey Day’s onscreen debut season, Season 42 (the season premiere, with Margot Robbie). “Chad & J.Lo” is, of course, a continuation of Pete Davidson’s “Chad” series of pre-taped sketches, only with J.Lo playing herself instead of a character like Jessica Chastain or Julia Louis-Dreyfus did. “Barry’s Bootcamp” was, of course, a sequel to this season’s “SoulCycle” sketch from the David Harbour episode.

As mentioned, “Barry’s Bootcamp” is a clear follow-up to “SoulCycle.” While it doesn’t have the newness quality of the first sketch, it does improve upon the very weak ending that one had, and it plays around with the execution of its jokes. It also swapped out Alex Moffat for Mikey Day, which means the sketched lacked the same level of smarm to a degree — Moffat’s just better at than Day — but it still kept the bit about Ego Nwodim’s character just not being into him. Like the original, it’s all about the one-liners, like Bowen Yang’s introductory “My name is Amber, like the Alert,” Cecily Strong’s vasectomy/condom and dyslexia anecdotes, and Jennifer Lopez’s Britney Spears/Mother Teresa bait and switch.

“PottyPM” may not be an all-timer as far as sketches go, but the awkwardness that sets in once Lopez’s character comes in to ask how it works for women is palpable, in the best possible way. It definitely defies the logic of ads in the first place, but the PottyPM is even better if imagined as just something Kyle Mooney’s character decided to do himself. From that point on, the terrible, terrible attempt at Mooney’s character trying to prove he knows female anatomy (he does not) is short and sweet, with Lopez’s baffled reaction to what she’s witnessing making it even funnier.

The only sketch centered around J.Lo’s looks that truly counted as an exception to the established sketches beat was “The Corporal,” and it did so while playing well to Kate McKinnon and Aidy Bryant’s specific sense of humor when it comes to old Hollywood and classic pop culture. Especially in a way that last episode’s “Cinema Classics: The Wizard of Oz” sketch didn’t quite nail.

“Do you need an earring that says, ‘I fight other women’?”

Earrings made from “100% metal” that turn your ears “the color of money.” What’s not to like? Especially as it’s a sketch that gave Melissa Villaseñor something to do, which hasn’t really been the case a lot this season. While it’s surprising this episode didn’t feature Villaseñor doing her J.Lo impression, this sketch clearly drew inspiration from that, as the impression does, in fact, require hoops. In fact, Lopez never looked more relaxed and in her element this episode than when she was in this sketch, talking about hoops.

And one more thing: “When you look at your baby daughter, do you think, ‘How could I ever respect you’?” Give her hoops!

On the one hand, Lopez got to show her range with this sketch, even though it’s not even close to a Wisconsin accent. On the other hand, the episode was going so well without this sketch. On the other, other hand — there are three hands in this instance — whatever Chloe Fineman was doing in this sketch (as Kimmy, the long-haired girl who came with the hardware store) was pretty amazing, and Alex Moffat and Heidi Gardner’s “city-ots” (“city idiot”) were the kind of subtly weird characters that the live audience doesn’t necessarily pop for but are stealthily great. But in true “SNL” sketch fashion, the sketch doesn’t exactly know where it’s going, and its ending is weak.

Most Forgettable Sketch of The Night: “Them Trumps: Rally”

The problem with “Them Trumps” has always been that it’s a sketch that exists far past the prime popularity of “Empire.” Plus, it also highlights once again that literally anyone else could be playing Trump.

This episode essentially had a quite even distribution of sketches for every cast member, so while everyone gave good performances, it doesn’t feel right to single out any one person in particular for Best Female Performer and Best Male Performer. But considering the cold open, “SNL” continues to not even care about the talented performers it does have weekly in favor of former cast member Jimmy Fallon, past celebrity host Paul Rudd, Alec Baldwin and his awful Trump “impression,” and James Corden. There is no sane comedic world in which James Corden should take priority over any member of this current — or really, any — cast of “SNL.” An eight-and-a-half minute sketch to open “SNL” with a guy who thinks everything is funny (making nothing funny), a guy who took a recurring role from actual cast members and isn’t even good in it, and a guy whose greatest contribution to “comedy” in the States is singing along to the car radio. As for Paul Rudd, he isn’t the problem, but he’s part of the larger issue of the cast being bumped in favor of celebrity cameos.

If there’s one thing people should take away from this episode — other than the fact that Jennifer Lopez wasn’t here to read cue cards and knew her lines from the jump, Lorne Michaels be damned — it’s that Christmas carolers need to up their game and take inspiration from late ‘90s/early ’00s hip hop and R&B. (A City High riff in 2019? You love to see it.) Also, Pete Davidson has many talents, but doing more than holding the portable speaker in this particular sketch is not one of them.

This week’s Weekend Update didn’t have any hiccups for once, but it also wasn’t all too exciting. McKinnon’s Nancy Pelosi was just another instance of her doing the same impression for a different female character — there’s less twang in her Pelosi than her Elizabeth Warren and Hilary Clinton, but that’s about it — but at least it wasn’t one of animal people (lizard for Rudy Giuliani, possum for Jeff Sessions) impression that she does for male characters. Beck Bennett’s Jules character — who sees things a little differently — on the other hand, fired on all cylinders, for once. Usually, the character is so close to great but not quite there, but this time, all of the jokes and tics landed.

Also: How much must everyone at “SNL” have hated that Ryan Reynolds, who even had multiple bits in the previous episode, got to the Peloton ad (and brilliantly) before they could? Because while there were a couple of Peloton mentions in this episode, they were barely a blip compared to what anyone would reasonably expect.

Much like DaBaby during his performances, Jennifer Lopez was game for this episode of “SNL.” This was a strong episode to return to, but it was also stuck in a strange place of not quite being a Christmas episode and starting off with all of “SNL’s” worst instincts.