J.J. Abrams' final entry in the blockbuster trilogy is not devoid of fun, but all that razzle-dazzle can’t obscure a hollow core. This review contains some mild plot details about “Star Wars: The Rise of Skywalker.”

If 2015’s “Star Wars: The Force Awakens” was the biggest fan film ever made, an elaborate rehashing of the Saturday matinee space opera that made the 1977 original such a singular cultural event, “Star Wars: The Rise of Skywalker” slips into meta territory. Returning to direct the third installment of the blockbuster trilogy, J.J. Abrams has delivered a costly tribute to the tribute, with reverse-engineered payoff for anyone invested in these movies but wary whenever they take serious risks. It’s spectacular and uninspired at once, playing into expectations with a gratuitous fixation on the bottom line.

After Rian Johnson’s shrewd attempt to deepen the “Star Wars” arc with provocative implications about individuality and psychological conflict, “Rise of the Skywalker” brings the third cycle of galactic warfare to a close by reverting to nostalgia and regurgitating the same old bag of tricks. That hardly makes it a total loss: With emerging rebel leader Rey (Daisy Ridley) providing a sturdy emotional foundation, and billions of Disney dollars fueling an obviously stunning array of special effects, “The Rise of Skywalker” doesn’t squander every opportunity to dial up the thrilling nature of the epic at hand, but all that razzle-dazzle can’t obscure a hollow core.

In fact, produced in the age of internet-based fandom that reduces every cultural achievement to memes and conspiracy theories, “Rise of Skywalker” isn’t even a movie in the traditional sense so much as the blockbuster version of a Jedi mind trick — a hodgepodge of cameos and callbacks, snazzy lightsaber brawls and shrieking TIE fighters — all glued together by John Williams’ exuberant score and calibrated to create the perception of the ultimate gratifying finale. But it’s more the idea of that thing than the thing itself, zipping along with enjoyable bits and pieces but reducing the big picture to an amalgam of half-hearted ideas.

Those who did appreciate “The Last Jedi” — which dared to make Rey a self-made woman, allowed Luke Skywalker (Mark Hamill) to lose the faith, and complicated the moral compass of mopey villain Kylo Ren (Adam Driver) — already had a bad feeling about this. From “Star Trek” to “Star Wars,” Abrams excels at transforming established popular culture into a greatest-hits showcase, and his return to the director’s chair signaled that Disney wanted more of the same.

Even by those standards, “The Force Awakens” managed to juggle some refreshing new characters who fit right into George Lucas’ established universe, and inject some iconic surprises that fit the story at hand. “Rise of the Skywalker” benefits from the sturdiness of that approach whenever it fixates on its core team: Rey, cocky Millennium Falcon pilot Poe (Oscar Isaac), and bumbling ex-Stormtrooper Finn (John Boyega) radiate a charisma that hovers above the ham-fisted plot, in tandem with a sincere and heartfelt finale for Carrie Fisher’s Princess Leia with some clever use of old material. 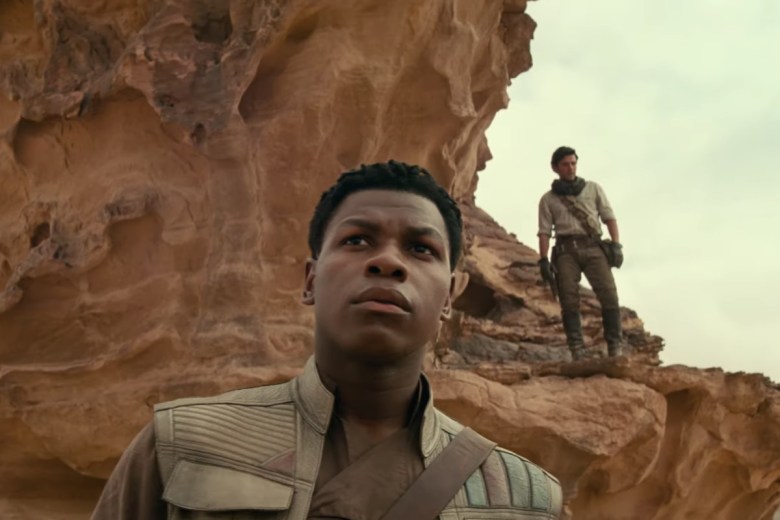 The quest they endure for much of the movie finds the team of rebels racing against time to track down the evil lair where Emperor Palpatine (Ian McDiarmid) has seemingly emerged from his death at the hands of Darth Vader in “Return of the Jedi” to pull some dark strings. Literally: “He’s been pulling the strings the whole time!” someone actually says, as if they missed the dead giveaway in countless trailers. But…how? And is the menacing baritone emanating from a shadowy lair really the same wrinkled monstrosity who Anakin Skywalker sent careening to his doom 36 years ago? And if so, WTF?

We won’t spoil those answers here, but it doesn’t take long for the movie to address them. “Rise of Skywalker” relegates its biggest revelations to a cramped sidebar some fans may have fun picking apart, but most will consider more than a little lazy. Having revitalized “Star Wars” with so many fresh faces, then losing the snake-like Supreme Leader Snoke in “The Last Jedi,” the series reverts to the exact same set of circumstances that wrapped the first trilogy. And yet those circumstances provide just enough material for the underlying “Star Wars” mojo to slip through in fits and starts.

It’s hard to deny the collage of amusements that creep into this particular journey, from involving twists surrounding the fates of the franchise’s most charming inventions (Chewbacca and R2-D2, of course) to phenomenal action sequences that utilize the full scope of technological wizardry in play. One chase scene involving “light-skipping” ranks among the very best the “Star Wars” movies have to offer, and makes the case that the brightest future for this corporate-mandated series lies in pure spectacle-based experiences above all else.

Alongside the rapid-fire pace, the new “Star Wars” movies retain a gorgeous, almost painterly aesthetic, and the current installment delivers on that front in every frame. From the neon-blue hues of lightsaber brawls to the sprawling outer space showdowns, “Rise of Skywalker” is always a visual marvel. When Rey and Kylo Ren face off with lightsabers atop a watery wreckage as waves crash all around them, the movie assembles the kind of sci-fi/fantasy marvel that only cinema of this scale can pull off.

The script, co-written by Abrams and Chris Terrio, stands on sturdiest ground when playing up the conflict between these two wayward characters: One descended from the series most iconic characters, the other uncertain of her origins (at least until a questionable reveal here), Rey and new First Order Supreme Leader Kylo Ren engage in a constant sense of uncertainty about each other’s allegiances that remains engaging until their final scene. The writers utilize a brilliant device engineered in Johnson’s film in which they often speak telepathically from separate locations but manage to interact physically through a series of well-timed edits; it’s this sort of ingenuity that the movie lacks throughout the rest of its bloated running time.

But, hey: If you pay for more “Star Wars,” the studio will get you some “Star Wars,” and even the slightest investment in the power of these movies can lead to certain euphoric highs. Who can argue with one last opportunity to ride with the Falcon through another daring jump, or watch Princess Leia guide her troops through uncertain warfare? Knowing as much, Abrams and co. push the innate power of the material to its breaking point, with a ludicrous closing battle in which virtually every facet of the series careens into the frame, with ginormous space fleets and intergalactic horses and a whole lot of shouting from every direction. It’s sound and fury signifying a desperate bid to ensure that something, anything, hell, everything sinks in for viewers keen on getting their maximalist fix.

Lucas’ original “Star Wars” did plenty of imitating on its own: The spirit of a classic swashbucklers and samurai epics folded into a Flash Gordon formula made all of those ingredients feel new. Over 40 years later, “Rise of Skywalker” operates as if the only cinematic tradition at its disposal hails from a galaxy far, far away. At one point, a major character suffers from amnesia; by the end, the movie aims to make audiences feel the same way so it can go through the motions. The opening crawl warns that “the dead speak!” Indeed, the ensuing 142 minutes encapsulate a franchise eager to resurrect ideas that should have died long ago.