Amy Sedaris offers a charming and funny performance in "The Mandalorian" Episode 5, but not even she can't salvage a predictable plot that leans far too heavily on nostalgia. 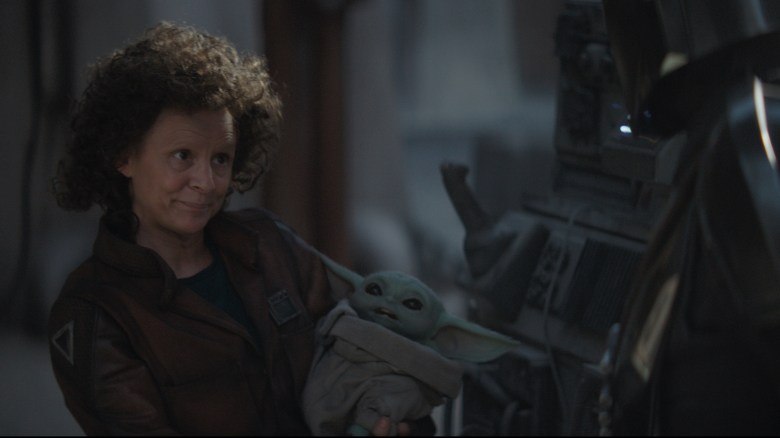 The fifth episode of “The Mandalorian” takes place on Tatooine. There are Tusken Raiders and pit droids. Someone makes a reference to having the high ground. There’s a roughish guy who confidently kicks his feet up on a table at the Mos Eisley Cantina, just like Harrison Ford did back in “A New Hope” in 1977.

The Disney+ show has yet to do much to appeal to those who aren’t already onboard the “Star Wars” hype train. Although the franchise’s fanbase is large enough to make that a moot point, even devout “Star Wars” fans might find themselves periodically checking the clock during the slog that is “Chapter 5: The Gunslinger.” Critiquing “The Mandalorian” for not pushing the franchise in a new direction is an exercise in futility at this point, but the series’ latest installment lacks many of the basic elements one would expect from any decent show. Stakes aren’t getting raised, characters aren’t being fleshed out, and not even the moment-to-moment action does the series’ reportedly $100 million budget justice.

At least the music continues to stand out. Series composer Ludwig Göransson’s work on “The Mandalorian” has been consistently excellent, and every time his music swells, it is to the overall scene’s benefit. The sounds are frequently bombastic, but never distractingly so, and plenty varied: There’s the spirited, adventurous anthem when the Mandalorian (Pedro Pascal) blitzes across the Tatooine desert on a speeder bike, appropriately intense music during the fight scenes, and even a playfully whimsical tune when Peli Motto (Amy Sedaris in the series’ latest celebrity cameo) discovers Baby Yoda wandering off the Mandalorian’s ship.

Sedaris represents the series’ fanbase, constantly oohing and ahhing at Baby Yoda, and it’s all very endearing. She’s the episode’s brightest spot, sassing the Mandalorian whenever she’s not doting on his stowaway, and she even gets in on the action in the episode’s climax. Unfortunately, Sedaris emoting at a puppet and some nice jangles aren’t enough to salvage the latest installment of “The Mandalorian.”

Episode 5 begins promisingly enough with a frantic space dogfight, but things settle into a disappointingly well-worn routine when the Mandalorian touches down on Tatooine to get his ship repaired. He goes to the Mos Eisley Cantina — of course — and teams up with another presumably one-off character who lacks the rugged charm of Episode 4’s Cara Dune (Gina Carano) or the snarly presence of Werner Herzog’s character early in the series.

Like last week, the Mandalorian needs money, so he teams up with that one-off character, a petulant, unlikable rookie bounty hunter (Jake Cannavale), to track down another presumed one-off, a dangerous assassin (Ming-Na Wen). That’s pretty much the extent of what can be said about those characters, and the Mandalorian unfortunately continues to be more of a walking action figure than a multifaceted individual with personality or depth.

When the Mandalorian leaves his overeager partner with their bounty, the titular protagonist ends up getting double crossed, because of course he does. Baby Yoda is threatened by a bounty hunter, as it was in each of the four preceding episodes. The scenery has changed, but the plot is unmoving.

Again, like last week’s episode, much of the climactic fighting is shrouded in darkness and it becomes difficult to discern what is happening on-screen. There’s no village of farmers to cheer for or a towering AT-ST to gape at either; It’s just two people occasionally squaring off against another person in a big, lifeless wasteland.

There are, however, plenty of “Star Wars” references: Like in “A New Hope,” “The Mandalorian” introduces the Mos Eisley via a quick showcase of its eclectic alien patrons. Later, the Mandalorian does a Boba Fett and says someone is no good to him dead.

Nostalgia is one thing, but the utter dearth of new ideas here just makes the bountiful references a glaring reminder that this has all been done much better before. Say what you will about the “Star Wars” prequel trilogy, but at least those films had some new ideas.

“The Mandalorian” debuts new episodes every Friday on Disney+.

This Article is related to: Television and tagged Disney Plus, The Mandalorian, TV Reviews