Sundance: The actress-turned-filmmaker confronts the corrosive power of evil in a well-crafted dramatic horror entry with some big twists. 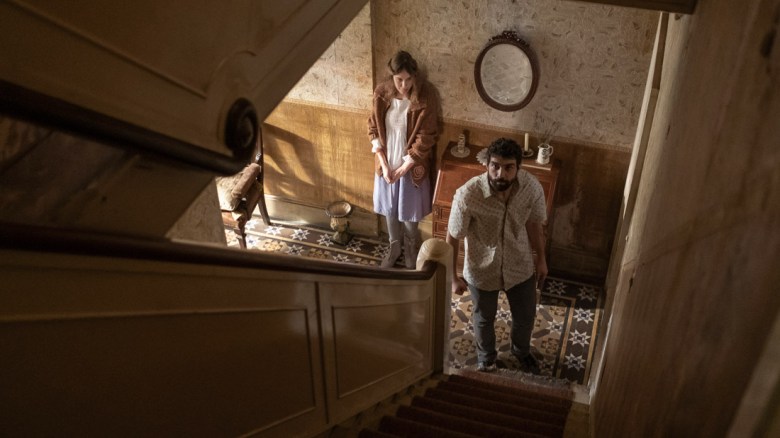 Nothing ever good was hidden up in an attic, and kudos to first-time director Romola Garai for cheekily making mention of the woman who lives on “the top floor” (no attics here!) before unspooling the terror of her “Amulet.” At once a haunted-house thriller and an examination of the cost of trauma, the actress-turned-filmmaker approaches her debut with both a clear understanding of genre tropes and an ability to use them for satisfying dramatic ends. It’s an impressive first feature, and while fans of zippy midnight movies might balk at its slow-burn opening act, the film eventually builds to some nutso body horror and a strong sense of mythology that announces Garai’s arrival as a filmmaker to watch, no matter the genre.

Crafted around a simple conceit — a former soldier returns to an unstable life in the city and is eventually tapped to assist a struggling mother and daughter in their creaky rowhouse, the kind that holds plenty of secrets — Garai, who also wrote the film’s script, uses her horror bonafides to sneak in a queasy story about trauma in all its forms. While mostly set in said creaky rowhouse, “Amulet” also regularly moves back in time to chronicle the once-boring forest-set duties of solider Tomaz (Alec Secareanu). Soon enough, the two time periods intersect in surprising ways, as Tomaz’s turn manning a mostly empty outpost and his new mission caring for Magda (Carla Juri) and her sequestered mother (Anah Ruddin) have far more in common than anyone could have initially guessed.

Garai opens her film in that quiet forest, as Tomaz busies himself with mundane tasks, all the better to keep at bay the creeping sense that his life of isolation is not entirely of his own making. (Hints about his life before his military career are meted out in maddeningly small bits, never adding up to much beyond vague possibilities.) Cinematographer Laura Bellingham ably adapts her documentary skills to lensing Tomaz as he goes about his day, and her camerawork has the effect of making him feel watched even when he’s toiling in seeming solitude. In short order, two key things happen: Tomaz discovers a strange carved amulet in the woods, and a traumatized woman comes stumbling into his camp. Some months later, back in London and with little to his name, those events will come full circle. As the film slips between past and present, the horrors of his time in the forest seem impossible to remove from his everyday existence. They are, and for good reason.

After an accident at his construction gig, Tomaz meets a kindly nun (Imelda Staunton), who attempts to get him back on his feet with a somewhat unconventional new job working for (and living with) a struggling mother and daughter. “Forward is not the only way, Tomaz. There are other roads,” she tells him, and who wouldn’t trust a kindly nun when it comes to, well, anything? Magda, meanwhile, is suffering from her own ailments, her mother is imminently dying, and their home is crumbling around their ears. All Tomaz has to do is help a bit around the house in exchange for room and board, and while it sounds like a too-good-to-be-true offer on paper, in practice, it’s hardly appealing.

There’s the ranting mother on the top floor, queasy close-ups of meat-filled meals, and a sense of uncleanliness that goes beyond bad pipes and peeling wallpaper. As the film unfolds, it starts to resemble another recent standout in the Sundance lineup: Babak Anvari’s 2016 “Under the Shadow,” which also circled housebound characters, the always-close trauma of war, and a sense that something supernatural (or, at least, unnatural) is lurking just out of the frame. Secareanu, best known to domestic audiences for the wrenching gay romance “God’s Own Country,” makes for an engaging lead, one capable of grounding even the wackiest of turns that dominate the film’s middle sections. Here’s a horror star who isn’t afraid of appropriate reactions: there’s at least one scene during which a gobsmacked Tomaz gawks at the terror in front of him, clutching his head in both horror and disbelief, echoing how the majority of the film’s audience will likely react at the exact same time.

And yet he comes with a twist, too. As Garai attempts to sell a potential romance between Tomaz and Magda, quiet types bonded by their strange shared situation, “Amulet” reveals some new kinks in both Tomaz’s personality and his experience in that distant forest. Initially presented as our protagonist — and, again, a good one at that — Garai’s slow interrogation of her lead finds new angles, and new terrors. The questions Garai asks are tough ones that befit both her chosen genre, which has always used outsized horror to confront everyday problems, and more traditional dramas.

The central theme of “Amulet” isn’t “what does this creepy amulet have to do with the screaming woman in the attic?,” but “what’s the price of absolution?” or even “how does evil seep into every inch of a person’s life?” Heady asks, and ones that Garai is often able to answer in high style in a chilling, smart first look at what she’s capable of behind the camera.

“Amulet” premiered in the Midnight section of the 2020 Sundance Film Festival. It is currently seeking distribution.