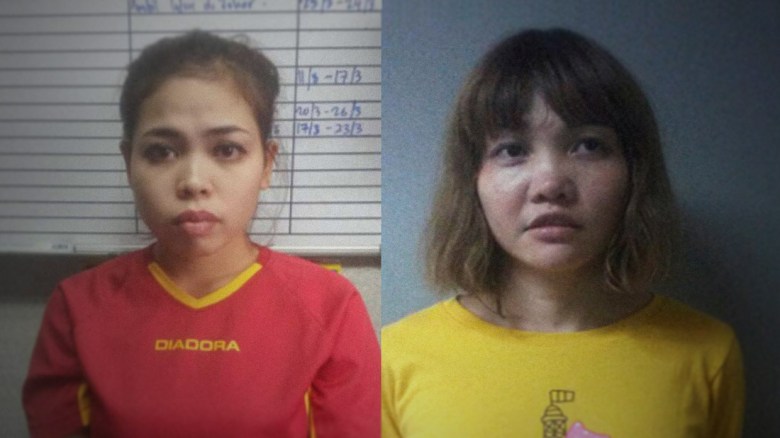 We live in a golden age of artless documentaries that have no discernible purpose or ambition beyond regurgitating the recent past for people who would rather spend 90 minutes watching something on Netflix than 10 minutes reading the same information on Wikipedia, but the truth is that things have gotten so out of hand that you can’t even believe that certain things have happened until you see them with your own two eyes. Or until a trustworthy filmmaker has laid out the facts against an ominous score and punctuated them with enough infographics and interview footage to remind you that truth is stranger than fiction (and getting weirder every day).

An example: Back in February of 2017, you probably heard something about how Kim Jong-un’s older brother was assassinated in broad daylight at the Kuala Lumpur International Airport. You might still recall that his name was Kim Jong-nam, or that he was murdered by two young women who snuck up behind him in the middle of the crowded terminal, cupped his eyes as if they were surprising an old friend, and wiped VX nerve agent — the deadliest substance on Earth — directly into his eyes. Some people out there may even remember that one of the killers wore a white t-shirt that had “LOL” written across the chest in thick black letters. But did any of that information really sink in? Did the sheer audacity of that hit linger in your mind the same way it might have had you seen it in the James Bond movie where it belongs? Did the geopolitical implications of the attack inspire you to follow the story as it fanned out to a matrix of ambassadors and secret agents that spread across the whole of Asia? Or did it all seem too farfetched to settle into the part of your brain that tries to make sense of world history? There were rumors that the two women had been under the impression they were participating in a Japanese prank show, but that deranged twist only made the news seem more disposable somehow.

This is hardly a new phenomenon, even if it’s now occurring at an unprecedented pace: The greatest trick the devil ever pulled was convincing the world he didn’t exist, and history’s most dangerous men have always been those who knew that rational people would struggle to imagine their crimes. And so it’s easy enough to appreciate why Ryan White decided to make a documentary that explains the death of Kim Jong-nam in the most straightforward terms possible; why “Assassins” eschews subplots, color commentary, or even any kind of residual context as it walks us through what happened. Indeed, the story is so outlandish — and the film so dry — that it’s hard not to be impressed by the discipline White showed in refusing to have more fun with it. He knew that the facts would prove riveting enough on their own (and they do), and he wanted to capture this liquid moment in history before we all wiped our hands of it, or it sublimated into the atmosphere of an age when the breathing air has become toxic enough to disguise the other poisons we pump into it.

White, making a sharp and hilarious pivot away from the subject of his previous film (“Ask Dr. Ruth”), begins with a Jakarta-born woman named Siti Aisyah, whose Facebook page shows her enjoying a birthday dinner with friends at the Hard Rock Cafe the night before she would kill the rightful heir to the North Korean regime. When she smiles — and she’s always smiling — we can see that her teeth are wired with braces. Her social media presence is an un-curated stream of emojis, exclamation points, and excitement about places she might soon travel for work. Siti seems innocent. Basic. Later, as the film dips into flashbacks with the analytical logic of a legal case, we’ll learn how difficult it was for her to earn that happy-go-lucky veneer.

While the second half of “Assassins” unfolds across a court trial, the first half introduces the story by sharing any relevant information in much the same order as the world first received it. So from Siti we go to the remarkable CCTV footage, and see the final moments of Kim Jong-nam’s life in all of their bizarre and pixelated glory. We get a crash course in the North Korean chain of succession (infographics!), and learn why Kim Jong-um wanted him dead. White indicates that Kim Jong-nam found despotism to be distasteful, and preferred the capitalistic vibrancy of American theme parks to the autocratic desolation of Pyongyang, but anyone interested in pulling on that thread is watching the wrong movie. We gather that the Malaysian judicial system would sooner hang someone than hear them out, but this isn’t a documentary about how power has corrupted those courts. White also tees up a damning portrait of international diplomacy, and how the sins of those at the top of the governmental ladder often trickle down and destroy the most vulnerable citizens of their respective countries, but he always stops himself short of a thesis.

He’s far more interested in the girl who laughed at death. Her name is Doan Thi Huong, and she grew up on a Vietnamese farm where she was too skittish to even butcher a chicken. She turned to a career in entertainment when she couldn’t find a way to put her accounting degree to good use, eventually auditioning (quite poorly) for “Vietnamese Idol” before settling for a job as a waitress. That’s when she met a mysterious man who offered her a lucrative gig making “funny videos” for Japanese television. It’s gripping and terrible to watch as North Korean agents seize upon her desperation and string her along via a series of disguised practice missions.

Mercifully, White’s straightforward approach forbids him from teasing out the idea that the women might actually have been more than the unwitting perpetrators of a perversely brilliant scheme. “Assassins” generates sufficient suspense over the outcome of Siti and Doan’s joint trial, but their innocence is unambiguous, particularly after White embeds himself with Siti’s legal team. “Assassins” finds its pulse in the fact that it was filmed in media res, before the dust had settled on this strange ordeal, and the perspective of Siti’s counsel proves invaluable during the trial. White’s relationship with them was also likely instrumental in securing audio recordings of the interviews the women conducted in prison, though the filmmaker naturally elects not to explore the friendship that forms between the suspects behind bars. Siti makes a comment about how Doan is the only one who could possibly understand her plight, and — like so many of the ledes that Ryan doesn’t follow — it feels like an unopened portal to a whole new universe of intrigue.

By the time “Assassins” is over, however, White has addressed Siti’s isolation in his own way. His documentary’s vacuum-like seal has a tendency to separate this entire saga from the outside world (we understand its place in Kim Jong-un’s agenda, but everything beyond that is left to inference), and yet telling Siti’s bizarre story in such clear terms will make it real in the minds of those who didn’t know what to do with the raw information when it first came out. And people will remember the name Siti Aisyah, and the name Doan Thi Huong, and they will remember how their lives were forever interrupted by something so crazy it could only happen in a movie.

Assassins premiered at the 2020 Sundance Film Festival in the Documentary Premieres section. It is currently seeking U.S. distribution.