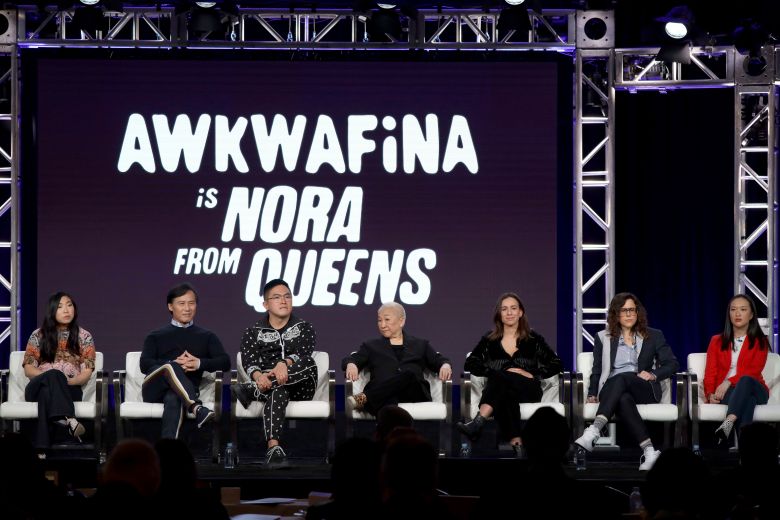 The cast and crew of “Awkwafina Is Nora from Queens” during a panel at TCA.

Comedy Central has ordered a second season of “Awkwafina Is Nora From Queens” ahead of the coming-of-age comedy’s series premiere on January 22.

The announcement continues what has been an especially busy January for actress and rapper Nora “Awkwafina” Lum, who received the Golden Globe Award for Best Actress earlier in the month for “The Farewell.” Awkwafina, series co-stars BD Wong, Bowen Yang, Lori Tan Chinn, and executive producers Lucia Aniello, Karey Dornetto, and Teresa Hsiao took the stage at the Television Critics 20202 Winter Press Tour in Pasadena Tuesday morning to discuss the upcoming series, Asian representation in entertainment, and Awkwafina’s reactions to her Oscars snub earlier in the week.

While Awkwafina has enjoyed a rapid rise to stardom due to her musical work and in appearances in films such as “Crazy Rich Asians,” her upcoming Comedy Central series, which she also executive produced,  promises a relatable and self-deprecating look at the actress before she became one of the breakout names in pop culture. The series is inspired by Awkwafina’s coming-of-age experiences as a 20-something in Flushing, Queens.

“I made a point to draw on very true realities of my life, of my growing up, of who I am,” Awkwafina said during the TCA panel. “In the character of Nora, I don’t think she’s overdrawn in any way. She’s as real as I can play her.”

Although Awkwafina earned a Golden Globe for her work in “The Farewell,” she was one of several women and people of color who were snubbed during the Oscar nominations Monday morning. An Oscar nomination for Awkwafina would’ve been historic — the last Asian actress to get a Best Actress Academy Award nomination was Merle Oberon in 1935 — but Awkwafina maintained a positive outlook and noted that while improvements could always be made in diversity, 2019 was a strong year for women in entertainment.

“Bottom line, there were a lot of amazing performances this year and I think of all [the nominations] were warranted,” Awkwafina said. “That’s not also to say that there were some incredible movies that women helmed, including mine…there’s always more work to be done.”

“Awkwafina Is Nora From Queens” premieres on Comedy Central on Wednesday, January 22 (at 10:30 p.m. ET/PT).

This Article is related to: Television and tagged Awkwafina, Awkwafina is Nora From Queens, Comedy Central, TCA